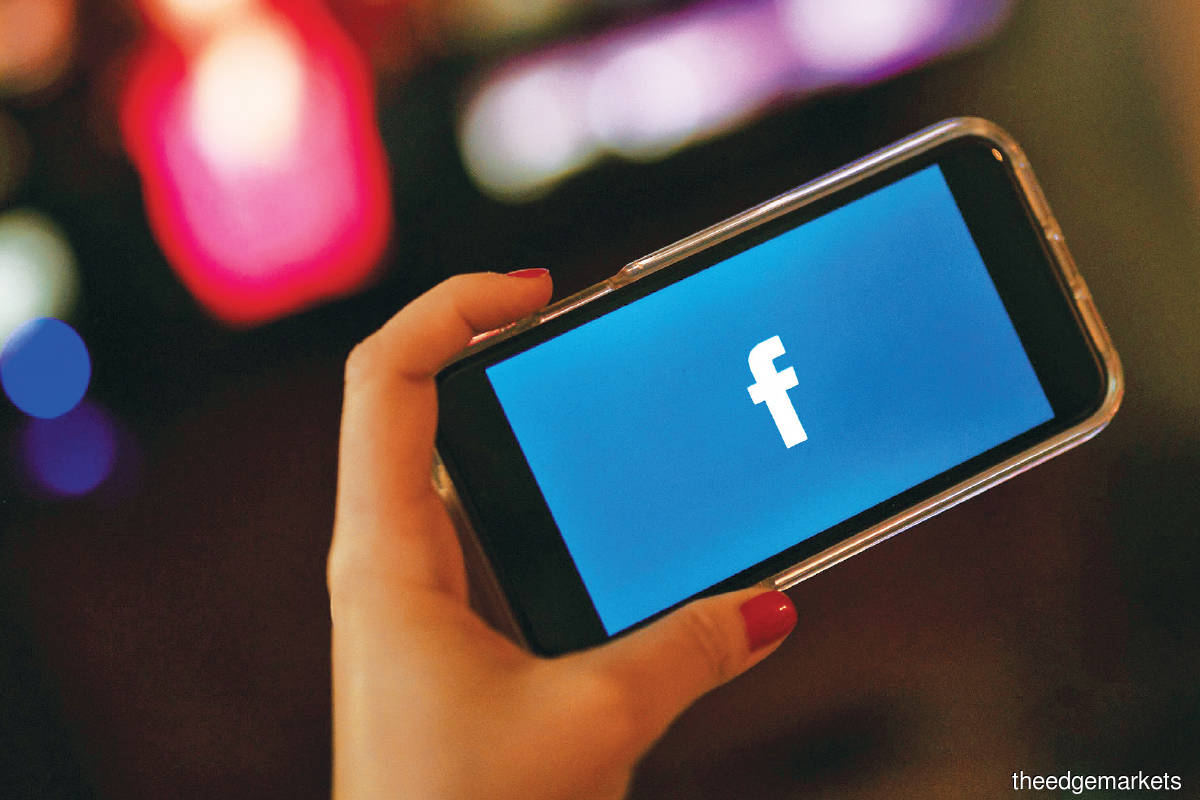 Facebook sees Apple’s move as an existential threat to its business model. (Photo by Bloomberg)

SMARTPHONE behemoth Apple Inc and social media giant Facebook Inc have long been frenemies. Apple’s late co-founder Steve Jobs once mentored Facebook founder Mark Zuckerberg. More recently, however, the tech titans have been squabbling a lot. Now, their quarrel is about to spill over into your phone. Apple will soon send an App Tracking Transparency software update that will give iPhone users more control over their own privacy. When you access an app, a question will pop up: “Facebook would like to track you across the internet and gather your personal data, which it wants to sell for profit. Do you wish to grant it permission to do that?” You have two options: “Allow” or “Ask not to track.”

I use a MacBook Pro laptop and iMac desktop. A click on my Safari browser tells me who the website I am accessing is trying to pass my data to. When I accessed CNN.com today, Safari told me that it had prevented 32 websites from tracking me, including Facebook and Google. Facebook fears that the language Apple has used to prevent such tracking in the past will also be used to stop tracking of data on iPhones and most people will just say “no” or “ask not to track”.

Facebook, which earns almost all of its revenues from selling targeted ads, sees Apple’s move as an existential threat to its business model. Zuckerberg was so angry when he first heard that the iPhone maker would roll out app trackers to prevent his firm from extracting data that he reportedly told his team that “we need to inflict pain” on Apple.

Apple’s pain is Facebook’s gain.  The showdown between two of the world’s largest tech companies will change the way we use the internet. Will Apple be able to prevent internet firms such as Facebook from obtaining a customer’s data without permission and profiting from it? Or will Facebook prevail, making the privacy battle all about “the future of the free internet”?

A giant social network with the eponymous Facebook platform, Instagram and WhatsApp, it reaches most of its users through mobile apps by putting trackers in its apps and collecting data across all the apps and websites. With that huge trove of data, it builds a comprehensive profile of you, which it then uses for ad targeting. Facebook’s business model is to drain as much data about you as it possibly can from all the apps you use or websites you visit and then sell ads itself, or sell the data to others who are selling ads.

It does not just sell data to companies to help sell targeted ads. For years, Facebook has been accused of targeting voters, inciting violence or pushing people towards more extremist political causes. In 2015, it sold data to Cambridge Analytica, which targeted voters in the UK to influence them on Brexit. In 2016, Russian bots and extreme right-wing groups in the US used Facebook data to help catapult then Republican candidate Donald Trump to the most powerful position on earth. More recently, conspiracy theory groups such as QAnon have thrived on Facebook.

For Facebook, you are the product that it sells to advertisers or anyone who might need it for nefarious purposes such as, say, Cambridge Analytica or an extremist group like Proud Boys that might want to take over the legislature and install election losers in the seats of power. As a 20-year-old setting up Facebook in his Harvard dorm room, Zuckerberg called people who handed over their personal data to him with utter disregard to privacy as “dumb f****”. Facebook says by preventing it from extracting whatever data it wants, Apple is interfering in its freedom and ability to profit from iPhone users. Apple CEO Tim Cook recently attacked Facebook, noting that it just wanted to harvest more personal data. “If a business is built on misleading users, on data exploitation, on choices that are not choices at all, then it doesn’t deserve our praise, it deserves reform,” he said last month.

Apple is in the business of selling devices such as the iPhone, iPad, Apple Watch and iMac and, reportedly in a few years, an Apple Car. Its business model is subscription-based. The smartphone giant bundles services such as Apple Music, AppleTV+, video gaming service Apple Arcade, data storage service iCloud, fitness app Apple Fitness and Apple News in a subscription service. Apple owns the highway and collects toll. It earns up to 30% in fees from the money that developers make on its App Store. Increasingly, Apple is also selling devices such as iPhones on multi-year subscriptions — where you pay a monthly fee and, after two years, return the old phone and get a new one while continuing to pay the same fee.  “Their game plan is to eventually sell you a subscription that includes hardware, software and services,” Gene Munster of Loup Ventures told me recently.

The iPhone maker claims that it is not in the business of stealing your data and selling it for money. Jobs, who died in 2011, often complained about ad-focused firms soaking up a lot of data and violating the privacy of PC, smartphone and tablet users. In 2010, he explained that the user’s privacy was at the cornerstone of everything that Apple did. “Some people want to share more data than other people do,” he said. “Ask them. Ask them every time. Make them tell you to stop asking them if they get tired of [your] asking them. [And] let them know precisely what you’re going to do with their data.”

Apple operates a walled garden. When you visit a big park, there are rules like no littering, chopping down trees or rowdy behaviour. Apple’s walled garden operates through its App Store. So, a firm like Facebook that wants to reach iPhone’s users submits its apps to the App Store, where it agrees to comply with Apple’s rules. It does not matter whether you are the seventh most valuable company on earth with a market capitalisation of US$780 billion (RM3.15 trillion), sit on US$65 billion in net cash and operate the world’s biggest social media platform. If you want to be in the App Store and want iPhone users to download your app, you just need to follow the rules.

While Facebook happily signed on to all the rules when the App Store was first set up, it does not like some of the new rules. So it is now campaigning to have them changed. Indeed, it wants Apple to dismantle its own store or allow other stores on the iPhone real estate. Facebook also accuses Apple of operating a “monopoly” even though ­iPhones make up just 30% of all smartphones in use globally.

If Facebook cannot collect as much data as it wants, it cannot sell as much data and cannot do precise ad targeting. Without such granular data, advertisers may not be willing to pay Facebook as much as they used to for better data. That means Facebook’s revenues, and profits, will go down. In reality, things are not as dire. Facebook is a monopoly of sorts, particularly for localised targeted ads. Advertisers cannot go anywhere else. If the social media giant is giving them 25% less data, they might still be willing to pony up 90% of what they have been paying for the ads. If you run a neighbourhood restaurant or a plumbing business, how else would you reach your customer if not on Facebook, which can target the ads right down to the section of your street? Facebook is unlikely to go out of business without the data that Apple prevents it from tracking. Analysts estimate Facebook might get 7% to 12% less in total revenues in part because Apple does not have a monopoly on smartphones.

The social media giant argues that, as the world reopens post-Covid pandemic, struggling local small businesses must have the ability to target their customers or they will collapse, causing bigger economic problems for the global economy. Facebook is also trying to pre-empt Apple’s move by asking users for permission to track their data so it can target them with ads. The request will take the form of a pop-up, which tells users that allowing trackers means they “get ads that are more personalised” and “support business that rely on ads to reach customers”.  Though Zuckerberg says he is standing up to Apple, the biggest company on earth, few are buying his “Facebook the saviour of small business” line.

It is unlikely much will change over the next five years. Apple might prevent Facebook from gathering some of its data and Facebook might lose some of its revenues, but technology will eventually advance and Facebook will be able to figure out a way to collect data surreptitiously from other sources and make up for a lot, if not all, of the data that Apple prevents it from gathering. Advertisers might not get as much of a return on their investment without the tracking as they used to, but they will soon realise there is no alternative to the reach of Facebook. Eventually, advertisers might push Facebook to embrace something like Google’s Federated Learning of Cohorts or FLoC,  which tracks internet users’ interests and serve them ads relevant to those interests.

A bigger impact will be psychological. If your phone continues to warn you every time you open an app that you are being tracked and your data is being sold, at some point, you will get upset with the trackers and take action. You might tell your friends, who might stop using Facebook or Instagram. Facebook’s fear is that Apple’s move will slowly destroy its brand, and users and advertisers will come to view Facebook, Instagram and WhatsApp as apps that steal and sell their data.

Facebook now sees Apple as “a significant future competitor”. Having copied Snap, TikTok, Google and Pinterest to stay in the game, Facebook is now imitating Apple. Facebook spent tens of millions to develop its own smartphone a decade ago but abandoned the project when it realised that it would be an embarrassing flop. Hardware projects like Facebook Portal, which makes video calls such as FaceTime on the iPhone or iPad, have made little headway. Facebook is now developing a smartwatch to challenge the Apple Watch. It is also rushing to upgrade its Oculus virtual reality headsets before Apple releases its own augmented ­reality/ VR headset next year. Both Facebook and Apple are set to release their AR smart glasses in 2023.

The irony is that Facebook and Apple really need each other. If a huge, popular app such as Facebook is not available on the world’s most popular smartphone, iPhone users who are hooked on Facebook apps might switch to a different phone like one run on Android. Yet Facebook does not want to walk away from the iPhone because Apple’s upmarket users are among the most desirable demographics that most advertisers want to reach. It is in the best interest of both companies for the Facebook, WhatsApp and Instagram apps to be on the iPhone. But before we get there, expect a lot more squabbling and posturing.