Tech: Why Ant Group mega IPO is a game changer 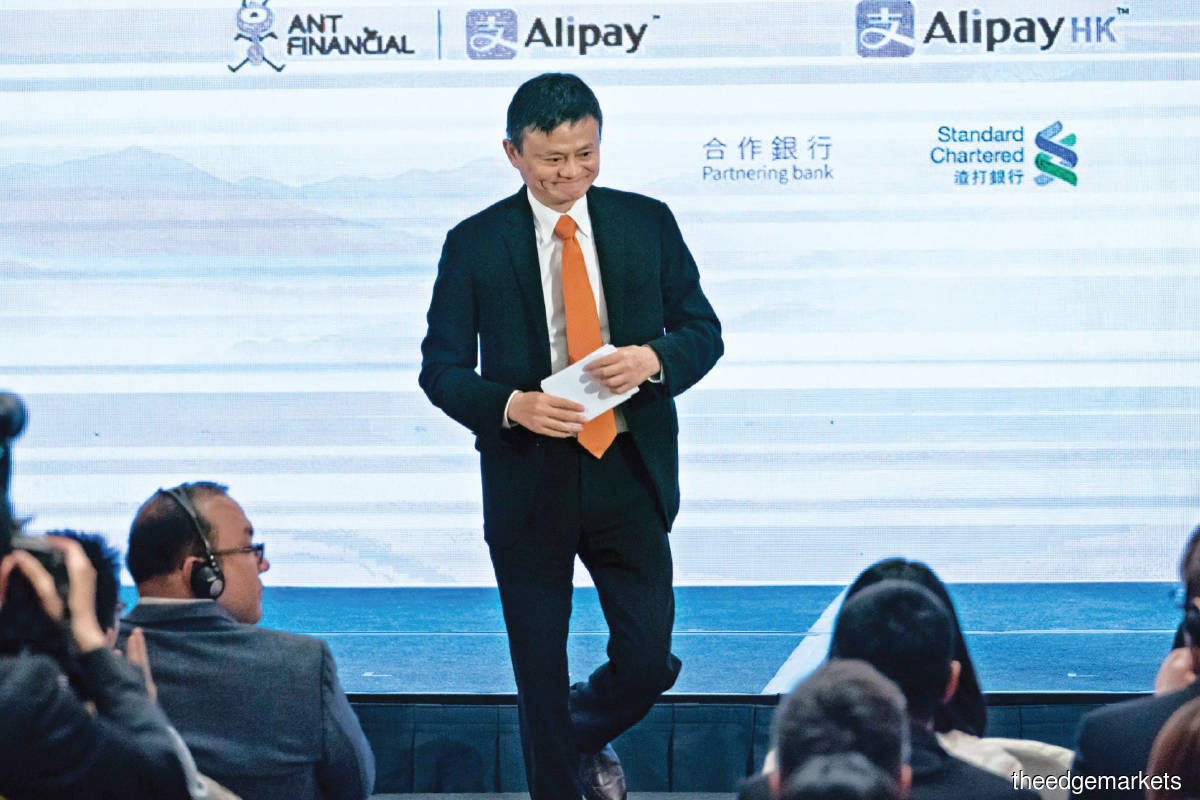 NOT since the listing of Chinese ­e-commerce giant Alibaba Group Holding six years ago has an initial public offering generated as much buzz as next week’s listing of Ant Group. Alibaba’s listing, which raised US$25 billion, was the biggest IPO ever at the time. Late last year, Saudi Arabian oil giant Aramco’s US$29.4 billion listing topped that. Now, Alibaba’s fintech affiliate, Ant Group, is taking the IPO crown again with the biggest listing of all time, which will also make it the most valuable finance firm on earth.

So huge has the demand been for its shares that Ant Group stopped taking investor orders for the Hong Kong leg of its IPO on Oct 28, a day earlier than originally scheduled, following the heavy oversubscription of the retail and institutional tranches. The Shanghai portion of the IPO book, which has been even more heavily oversubscribed, closed earlier in the week.

Hangzhou-born English teacher Jack Ma, 56, founded the Chinese e-commerce giant Alibaba during the 1999 tech bubble by scraping together US$60,000 from family and friends. Ant’s listing will catapult Ma, currently the 17th-richest person in the world — with a net worth of over US$60 billion — to the sixth-richest person on earth, with a net worth of more than US$75 billion, or in the same league as Berkshire Hathaway’s CEO Warren Buffett, LVMH Moët Hennessy Louis Vuitton chairman Bernard Arnault and Mukesh Ambani, CEO of Indian oil, chemicals and telecom giant Reliance Industries.

At the core of Ant is its mobile payment app, Alipay, which now has about one billion registered users. Only Facebook with its 2.7 billion users, messaging app WeChat with 1.2 billion users and Instagram with 1.1 billion users are bigger. You can use Alipay to buy a bus, train or plane ticket, pay for ride hailing or food delivery, buy anything online or offline in a store or a mall, or even noodles from a street hawker, pay bills and, indeed, use it for a range of services. The source of funds can be your credit card, debit card, your e-wallet account’s balance or money from your Yu’e Bao investment account with Ant, or from Huabei, your line of credit from Ant.

Alipay was conceived as a solution for the payment challenges facing traders on Alibaba’s Taobao marketplace. Alipay held money from buyers on Taobao that was released to the sellers only after the goods had been received. Since most Chinese did not have credit or debit cards, it allowed Alipay to provide a range of services, such as lending, deposits, wealth management and insurance, to its users. Alipay also uses the “float” from its deposits to generate short-term interest for itself. Last year, Alipay handled more than US$17 trillion of transactions, or more than Visa International and Mastercard combined.

Ant reported revenue of RMB118.19 billion (RM73.23 billion) or US$17.7 billion in the nine months ended September 2020, up 43% over the same period in 2019. With 731 million monthly average users, Ant is twice as big as global payments giant PayPal, which had 346 million monthly active accounts. PayPal generated revenue of US$12.8 billion in the first nine months of 2019 and is forecast to post revenues of more than US$15.1 billion for the first nine months of this year when it reports earnings next week.

Consultancy iResearch forecasts China’s digital payment transaction volume to grow from RMB201 trillion last year to RMB412 trillion by 2025. Some of the growth is coming from Ant’s new users but the bulk of it will be from existing users spending more money on its platform. Ant has grown its user base at more than 15% annually over the past three years, and is expected to grow 12% to 15% over the next three years.

The huge Alipay payment system has helped Ant draw in customers that borrow money from it, or buy wealth management products, including money market accounts, mutual funds and insurance. About 40% of Ant’s revenue comes from its credit tech platform, which includes virtual credit card Huabei, which has 400 million users, and microlender Jiebei. Want to buy something and do not have enough cash in your account? Put it on Huabei and pay it back like you do with a credit card. If you own a corner noodle shop and have temporary cash flow issues, Jiebei will advance you some money. Jiebei is now the largest microlender in China. Yet, Ant is just a quasi-bank. It might originate a loan that is either underwritten by an actual bank or securitised. Ant claims it takes three minutes to process a loan on its platform and mere seconds to disburse it.

In many ways, Ant has benefited from China’s underdeveloped financial infrastructure. Until recently, state-owned banks in the country mainly lent to state-owned businesses. That meant consumers and small businesses did not have a lot of great options. Ant has stepped in to fill that void. It began rebuilding consumer and small-enterprise finance in China and brought it to the modern smartphone era.

China’s lending market was not the only side of finance business that was antiquated. The deposit side of the business also dated back to the Stone Age. So Ant created Yu’e Bao, which has 700 million customers and now runs the world’s largest money market fund and has US$610 billion in assets under management, while its wealth management platform Ant Fortune offers funds from 60 asset management firms to investors. Small businesses or budding entrepreneurs who use the Alibaba platform leave spare money in their Ant accounts, which eventually finds its way into Yu’e Bao’s or one of Ant’s other funds.

One of the smaller parts of Ant’s business is insurance, which makes up 9% of its total revenue even though it is one of the largest online insurance platforms in China in terms of premiums generated. China’s online insurance market is expected to grow at more than 38% a year over the next five years, according to research firm Oliver Wyman.

At the heart of any tech company is data. Ant controls a huge amount of data through Alipay. If you are using the app to buy just about anything and never use cash or credit cards, imagine how much Ant knows about you, your spending habits and what you like to buy and when. That data helps power its online financial services for consumers as well as for corporate clients, including sellers of goods and services who want to know who is buying their stuff, how much more they can buy, and when. Ant’s advantage is that it has more data than anyone, except perhaps the Chinese government. Just imagine how powerful a company would be if it had all your financial data. Well, in China, Ant has it all.

Ant is not the only player with a lot of data in China. The company behind popular messaging app WeChat has a lot of data as well — even more financial data than Ant. WeChat Pay, the payment arm of WeChat, has twice as many daily transactions as Alipay but the average transaction size on WeChat Pay is less than a third of that on Alipay. Kevin Kwek, Bernstein’s fintech analyst in Singapore, reckons Alipay now accounts for about 51% of all digital payment transactions in China while WeChat Pay accounts for just over 45%. Though it has been catching up, WeChat Pay still has just half the gross margins of Ant.

How much is Ant worth?

So, what is Ant really worth? Unlike many of the pie-in-the-sky payment firms, Ant actually makes money. Only a handful of investment banks or brokerages have published research reports on Ant Group ahead of the IPO.  Morningstar Research values Ant at around HK$80 a share or right in line with its IPO price. At HK$80 a share, Ant stock will trade at 30 times this year’s earnings. PayPal, which has better margins, trades at 45 times this year’s earnings. Analysts and tech-focused portfolio managers  who have spoken to The Edge believe 12 months after its IPO, Ant Group could be worth anything from US$390 billion up to US$500 billion. Or a Hong Kong share price of between HK$100 and over HK$130.

What gets Ant to those lofty valuations is the expansion of its tech platform and improving margins. Management has said it will use proceeds from the IPO to expand AntChain, its blockchain, as well as merchant services. Some of the money will go towards growing Ant’s overseas ventures.

It is unlikely that Ant, which derives 96% of its revenue from China, will grow much outside its home base for the time being. Ant has investments in payment firms such as India’s Paytm, in which Warren Buffett and SoftBank are shareholders, and UK payment group WorldFirst. Scepticism about Chinese companies, particularly those that collect and monetise data, has grown around the world. In 2018, the Trump administration vetoed Ant’s US$1.2 billion deal to acquire money transfer firm MoneyGram International over national security concerns. Washington has been considering action against Ant over its payment app. The US State Department wants to blacklist Ant by adding it to the “entity list” with restrictions on acquisition of key technology. But Ant has forged partnerships with local companies in Hong Kong, India, Indonesia, Korea, Malaysia, the Philippines, Thailand, Pakistan and Bangladesh. Last year, Ant won a virtual bank licence in Hong Kong and has applied for one in Singapore.

What are the risks around Ant? “The biggest risk factor to consider for Ant’s future is regulation,” says Bernstein’s Kwek. “We think Ant has a track record of managing these risks relatively well and are therefore not overly concerned, but nevertheless recommend incorporating them in valuation assumptions.” Another concern is the digital yuan, a virtual currency that the People’s Bank of China is reportedly developing. Kwek thinks digital cash is a risk that Ant can overcome. “We believe Ant’s ecosystem of products with an already-large user base would be difficult to replicate and would allow it to defend its market share,” he says. The PBoC, he argues, does not want to disrupt third-party payment systems such as Ant.

Investors who are lucky enough to subscribe to Ant’s IPO will do well over the next three to five years. Alibaba listed its shares at US$68 six years ago. The stock jumped 75% over the next several months, then went below the IPO price. Today, the stock is over US$308. That’s a 4.5-fold increase over its IPO price in six years. Ant is much better positioned than Alibaba was when it listed.