Tech: Intel Outside in a new world order for chips 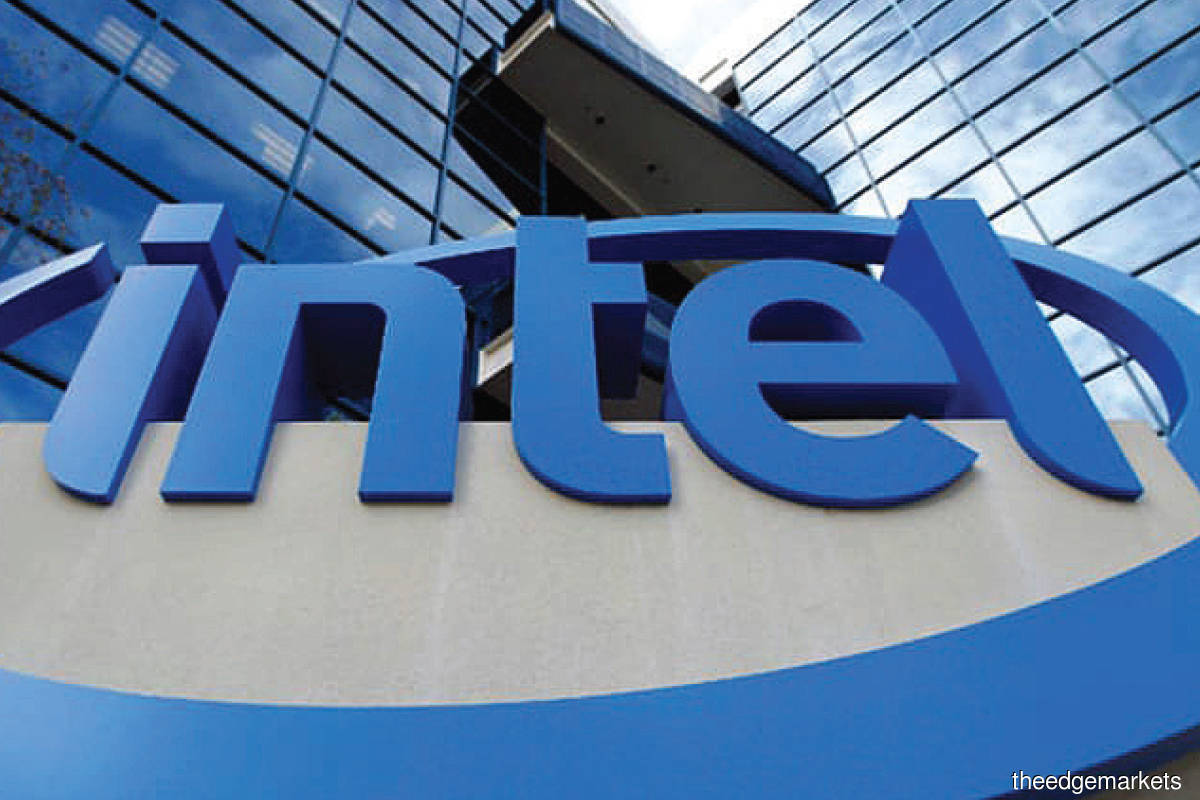 Challengers AMD and Nvidia and customers such as Apple emerge as an existential threat to Intel. (Photo by Bloomberg)

The competitive landscape for Intel has dramatically changed as it sees its traditional strongholds eroded by mobile chips based on ARM Holdings plc’s technology. Apple’s forays in chips as well as the rise and rise of rivals such as Advanced Micro Devices Inc (AMD) and graphic chip giant Nvidia Corp are increasingly seen as existential threats to Intel. ARM designs mobile chips; AMD, focuses on chips for cloud computing as well as graphics chips; and Nvidia’s niche is in making chips used for advanced graphics, gaming, cloud computing as well as artificial intelligence (AI). Nvidia is in the process of acquiring ARM from Japan’s SoftBank Group Corp for US$40 billion (RM162 billion).

From the late 1970s until recently, Intel was the dominant designer and manufacturer of chips that powered PCs and cloud computing. It was part of the dynamic duo dubbed “WinTel”, with Microsoft’s Windows being the other that launched the PC era four decades ago. The WinTel relationship was based on an instruction set architecture known as “x86”. Intel patented the instructions for operating PCs and Microsoft wrote the software that ran exclusively on those instructions.

ARM chips go in everything — from smartphones, laptops, desktop PCs and data centres to an array of sensors and cloud computing servers. ARM is a chip design house that creates instruction set architecture, or the mathematical language used to communicate with the chip. It sells licences of its chip designs to companies such as Apple, which then uses the licence to customise the chips to its own needs and get a company with a semiconductor wafer fabrication plant (fab) such as Taiwan Semiconductor Manufacturing Co (TSMC) and Samsung Electronics. Intel’s pain is TSMC’s gain.

For its part, Intel has always had an integrated business model. It designs and makes all its chips, commanding a premium unlike its rivals, which basically outsource all the manufacturing to companies such as TSMC. A large chip fabrication plant these days costs US$10 billion to US$20 billion. TSMC is building a US$12 billion chip plant in Arizona with a capacity that is about half of some of its other plants. Intel has fabs in Israel, Ireland and the US.

In many ways, Intel “invented” the global semiconductor industry. Indeed, Don Hoefler, the journalist who coined the term “Silicon Valley” in a 1971 story about chip firms in the San Francisco Bay area, referred to Intel as the dominant user of silicon wafers in the valley, whose business model at the time was being copied by an array of lookalikes. Started by engineers Gordon Moore and Robert Noyce in 1968, it became the predominant chip maker and an early driver of the US tech industry. The chip industry’s famous Moore’s Law, which states that a chip doubles the number of transistors — as well as its power efficiency and performance — every two years, is named after Intel’s co-founder.

As the designer and manufacturer of microprocessors, or the brains of any computing device, Intel built the most important component of the computer. Few people care about who makes the components in their car or refrigerator or, for that matter, their microwave oven. But Intel did not want to be a mere supplier of widgets. It wanted to differentiate itself from others, such as makers of commodity memory chips. So, through much of the 1990s, it spent billions on one of the most expensive corporate branding exercises, launching “Intel Inside”, a powerful and iconic marketing campaign for a company that did not sell to the end-customer or the final product. By 2000, it was one of the 10 best-known brands in the US, alongside Coca-Cola, Disney, Starbucks, Nike and McDonald’s.

At the heart of Intel’s problem is manufacturing. Once the dominant global chip maker, it cannot even seem to make its own chips. Intel has had a long history of manufacturing issues. It encountered problems manufacturing 14 nanometer chips back in 2014. If you are confused by nanometers, let me step back and explain. Circuit widths on chips are measured in nanometers, which are one-billionth of a meter. When Intel moved to 10nm chips three years later, manufacturing challenges became even more acute. Intel delayed those chips and continued to roll out older 14nm chips. More recently, in July, the microprocessor giant announced that it would further delay the rollout of 7nm chips, telling clients that the processors could now be at least 12 months behind schedule. It is already three years behind TSMC.

The size of the chips actually measures improved transistor density as chip manufacturers squeeze more and more transistors closer together into a tiny chip. The smaller the chip size, the better. Every time the size of the chip shrinks from, say, 14nm to 10nm and, now, 5nm, you get further improvement in performance and far better power efficiency. Yet, smaller nanometer does not mean chips are always shrinking in size. Far from it. To produce its 7nm chips, TSMC did not shrink the transistors much; rather, it changed the structure of the transistors. TSMC is now mass-producing chips at a scale of 5nm. It will begin transitioning to 3nm late next year.

There are two primary business models in the chip industry. There is the integrated device manufacturer (IDM) or companies such as Intel, which both design and manufacture their own chips. Because it can cost billions to build a chip fab, you need a huge revenue stream to make that plant economically viable. As the price of building a fab rose, a new business model was born using foundries for fabless chip design houses such as Nvidia and Qualcomm Inc. What a large foundry such as TSMC can do is to pool together revenues of literally dozens of fabless chipmakers with no factory of their own and build chips for them.

For years, Intel argued that being an IDM was a huge advantage, as it could combine the process of designing the chip and manufacturing it tightly together. Unfortunately, Intel manufacturing problems are weighing down its design capabilities as well. The fabless model now clearly has the ascendancy while the IDM model of Intel is on the decline. That is why TSMC’s stock has been soaring, up 78% this past year, while Intel’s stock is down 14% over the past 12 months. In contrast, the chip barometer, PHLX Semiconductor Index, is up more than 51% this year.

To be sure, manufacturing complex, tiny chips is an extremely difficult and technologically challenging process. Few things are harder to manufacture than state-of-the-art customised semiconductors. There is a reason it costs US$10 billion to build a factory and key engineers at chip makers command exorbitant salaries and bonuses in addition to hefty stock options. And there is a reason a handful of US companies are at the apex of chip design: Just one company, Taiwan’s TSMC, can make those advanced chips; and China is still three to four years behind the US in chip design and way behind TSMC in actual manufacturing of chips. You cannot just throw tens of billions at the problem and hope that somehow you will get the best chips.

If you want to gauge just how bad things are at Intel, look no further than AMD and Nvidia. AMD designs chips for the latest Playstation 5 and X-Box Series X video game consoles from Sony and Microsoft whereas Nvidia designs chips for Nintendo’s Switch console. AMD’s stock bottomed out at just under US$2 six years ago and is trading above US$97. Once an Intel clone with its own chip plants, AMD moved to a fabless model, sold its chip plants to Abu Dhabi’s sovereign wealth fund and pivoted to sophisticated chips used in cloud servers and gaming. After being spun off by AMD as GlobalFoundries, the chip foundry operator bought control of Singapore’s Chartered Semiconductor Manufacturing in 2009. Nvidia struggled as a low-end chip maker for years. Singapore’s Creative Technologies, a client, was once a 10% shareholder. Over the past five years Nvidia has found its niche in advanced graphic chips, catapulting it to become the world’s top semiconductor firm by market value.

In the PC and server market, in which Intel has an 85% share and AMD a 15% share, AMD is gaining share as Intel has faltered. But with AMD executing on its architecture and TSMC manufacturing those chips, Stacy Rasgon, Bernstein’s semiconductor analyst, says unless Intel quickly recovers, it is not unfathomable that AMD’s market share could eventually rise to 40% or even higher. In a true duopoly, Intel, which has long sold its chips at a premium, is unlikely to have similar pricing power.

Although it has dominated PC chips, Intel has struggled in several other segments. It spent more than US$10 billion on mobile chips, making no headway. In 2005, when Apple co-founder Steve Jobs was focused on getting the first iPhone to the market by mid-2007, he approached Intel to make mobile chips for smartphones. Intel turned him down because it thought the iPhone would be a huge flop. Apple then turned to ARM, its former subsidiary in the UK, to supply those chips. Today, almost all smartphone chips around the world are based on ARM designs. A year after Intel turned down Jobs’ request to make smartphone chips, it sold its mobile chip business to Marvell Technology for US$600 million. In another twist, four years ago, Apple approached Intel to make 5G modem chips for its smartphones. Again, Intel spent billions on 5G chips then threw up its hands and shuttered the 5G modem chip unit. Apple bought the 5G unit for US$1 billion and hired all its engineers. Apple is expected to launch its own 5G modem chip as early as late next year.

Although its chips may not be in smartphones, you can still find Intel chips in cloud servers and data centres. And while it missed the 5G modem chips, Intel still makes chips for 5G base stations. Make no mistake, Intel is still a growing company. Analysts expect 9% revenue growth this year and 7% next year. In the fast-growing chip industry, however, not only is growth much higher, but it is where you are getting the growth from that matters. Over the past five years, rival Nvidia has increased its revenues more than three-fold. Mobile, gaming, advanced graphics, AI and cloud computing are where bigger pools of revenues and profits are.

What’s next for Intel? Some analysts believe it might be headed the way of IBM to a slow and steady fall into oblivion. Mark Lipacis, Jefferies & Co chip analyst in San Francisco, says it is likely that Intel will soon pivot and take the AMD route, outsourcing most of its manufacturing to TSMC. Yet, Intel cannot just send its designs to the Taiwanese foundry and say, “Hey, our factory doesn’t seem to work. Can you guys make these chips for us?” Intel would need to entirely redo the chip designs to conform to TSMC’s manufacturing processes. The problem is that pivoting is not easy for a humongous chip giant like Intel. IBM has been trying to reinvent itself for years with little success.

Analysts say Intel’s salvation could be in two major acquisitions in recent years. In 2015, it purchased Altera, a designer of programmable logic devices, for US$16.7 billion and, in March 2017, it paid US$15.3 billion for Mobileye, an Israeli firm that develops vision-based, self-driving cars and advanced driver-assistance systems providing warnings for collision prevention and mitigation. Having missed the opportunity to put its chips inside smartphones, Intel is hoping it will get lucky with its chips inside driverless cars, an area in which Nvidia is already a player.