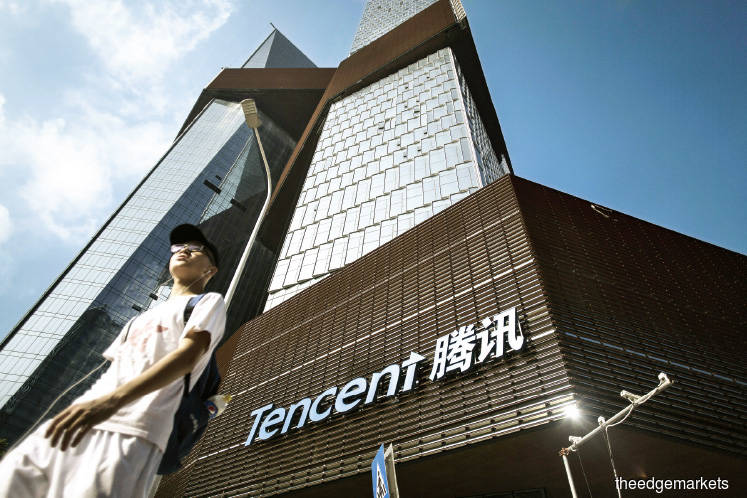 FOR years, Chinese internet companies such as Tencent Holdings, Alibaba Group Holding and Baidu have had an unfair advantage over their Western counterparts such as Google parent Alphabet, Facebook and Amazon.com in that China’s lax privacy rules have allowed the country’s tech companies to harness Big Data and artificial intelligence (AI) a lot more powerfully.

To be sure, the Chinese do not mind being watched all the time because they have lived under state observation for generations. Beijing keeps dang’an, a file on every Chinese with data that includes school grades, traffic violations or reports from local neighbourhood watches. The advent of smartphones and instant messaging has just made monitoring people and gathering personal data a lot easier. Over the years, Beijing has tried hard to strike a balance between harnessing the internet for economic growth and using it as a security tool.

But even in China some things are still sacrosanct — such as private chats and messaging. On Jan 2, Li Shufu, chairman of passenger car giant Geely Automobile, blurted out loud at a public forum something that has been on everyone’s mind in China. “[Tencent founder] Pony Ma must be watching all our WeChat every day,” Li remarked. The following day, Tencent put out a strongly worded statement denying that it monitors, stores or uses data from private messenger chats for commercial purposes. China’s privacy and data debate was finally out in the open and it was a respected Chinese corporate leader — not some Western human rights group — doing all the talking.

Of all the internet companies in the world — Facebook, Alphabet, Alibaba and others — that collect and monetise data, Tencent has amassed the biggest trove of data on earth. The more data a firm has, the more it can slice and dice it with AI-enabled data analytics, harvest it to push e-commerce or even sell it to advertisers. Tencent’s killer app is its instant messaging service WeChat, which has more than a billion monthly active users, a tad more than Western counterpart WhatsApp. But while Facebook is still struggling to come up with a way to monetise WhatsApp, Tencent already makes tons of money from WeChat, because most Chinese adults, and indeed most Chinese children, who have a smartphone chat, play games, buy and sell goods and services, hail a Didi cab or order food, watch videos, play music and pay bills on the WeChat platform. Now, however, Tencent is suddenly on the defensive. Detractors point out that Tencent, by its own admission, has been working with Beijing to develop an “early-warning system” for predicting the size of crowds and their movement to help quash dissent.

How did Tencent become Asia’s largest company and one of the world’s top five firms? Founded in late 1998 by Ma Hua Teng, or “Pony” Ma, a software engineer who used to work for a Shenzhen paging company, Tencent grew from a small instant messaging service based on ICQ instant messenger into one of the world’s largest internet companies and by far with the best access to data. Its growth has been meteoric. By the end of its first year, Tencent’s QQ messenger had a million users; within two years, it had five million users and 100 million in three years, rising to a billion registered users last year. From messaging, Tencent expanded to interactive gaming on mobile phones and PCs. It has since morphed into one of the world’s biggest purveyors of video games and eventually developed WeChat, which is basically a multipurpose social networking, messenger and e-commerce app all rolled into one. Tencent Video — China’s biggest streaming company, which is like Netflix and YouTube packaged as one — is now the dominant leader in China, ahead of Baidu’s iQiYi and Alibaba’s Youku Todou. It has probably the most formidable and stickiest internet ecosystem on earth, although e-commerce behemoth Amazon might be a close second.

With a market cap of more than US$540 billion Tencent briefly overtook the world’s fifth-largest listed company, Facebook, which is valued at US$545 billion, and is not far behind the fourth-ranking Amazon, which has a market value of US$599 billion. Tencent’s stock is up a whopping 121% over the past year, 762% over the last five years, 3,648% over 10 years and a split-adjusted 58,000% since its IPO in June 2004. A US$1,722 investment in the stock on the day of its IPO would be worth more than US$1 million today. No large-cap stock in the world has ever given that kind of returns in just over 13 years.

Tencent is not only big, it is also growing faster than any other large global company, including Facebook and Amazon. The Shenzhen-based firm is expected to report revenues of US$37.3 billion for last year and US$52.4 billion this year, up from US$23 billion in 2016. Morningstar estimates Tencent’s net earnings grew more than 50.4% last year and are likely to grow more than 40% this year. Tencent is developing more proprietary content and enhancing its newsfeed service, all with the goal of increasing user engagement. That enables Tencent to gather more data from its billion customers that it can use to grow the range of services it offers. The company is dramatically growing its advertising business, taking share from search giant Baidu. Bhavtosh Vajpayee of Sanford C Bernstein in Hong Kong estimates that Tencent, which had US$1.1 billion in ad revenues in 2016, is growing so fast that it will have US$7 billion in ad revenues by 2019.

Indeed, China’s most acquisitive company has done more than 100 deals worth more than US$40 billion since its IPO 13 years ago. Aside from the big US-based tech firm stakes, Tencent owns 22% of e-commerce firm JD.com, 5% of Chinese hypermarket operator Yonghui

Its VC forays are not just pie-in-the-sky investments that bear fruit years down the road. Tencent has a track record of nurturing its investee companies and helping them list as soon as they are ready to go public. Last year, Tencent’s search engine arm Sogou was listed in the US in October and its online reading unit China Literature raised US$1.1 billion in an IPO in November. ZhongAn Online P&C Insurance Co, China’s first online-only insurance company, in which Tencent holds a stake, raised US$1.5 billion in a Hong Kong IPO in September.

This year’s listing pipeline is almost as formidable: Spotify’s will be in February; also expected to go public in Hong Kong in the coming weeks are its 90% music-streaming subsidiary Tencent Music and Tencent-backed online healthcare service, WeDoctor Group, which has a valuation of nearly US$6 billion. While other companies are quick to put out press releases whenever they make investments worth hundreds of millions or even billion-dollar ones, the media and analysts often discover Tencent’s investment in other firms by accident or by combing through regulatory filings where it might be hidden.

Its biggest unicorn is WeBank, in which it owns a 30% stake. Chairman Ma and other major shareholders of Tencent own most of the rest of the fintech that lends money and offers wealth management and payment services. “Tencent has a big portfolio of investee companies that are likely to be listed over the next two years,” Chelsey Tam, internet analyst for Morningstar in Hong Kong, tells The Edge Singapore.

As the world’s largest interactive gaming company with games such as Arena of Valor, Tencent paid US$8.9 billion to buy Supercell, the Finnish mobile game developer of Clash of Clans, in 2016. Tencent also has stakes in CJ Games, a top South Korean game developer, Japanese game developer Aiming, Iceland’s Plain Vanilla and US mobile game developer Dots. “Tencent has a strong track record as a gaming company that has continued to grow its earnings year after year,” says Christine Tan, chief investment officer of Excel Funds in Toronto. “In its PC gaming, Tencent is generating strong revenue growth with content updates, expansion packs and engagement-enhancing initiatives such as tournaments for League of Legends and Dungeons and Fighters,” Tan says. Mobile gaming revenue has grown at an even faster pace, with higher average revenue per user and the launch of mobile role-playing games such as Legend of XuanYuan and Journey to Fairyland, Tan notes. A key growth driver for Tencent, she believes, will be the survival shooter game genre.

Tan says the real jewel inside Tencent is its growing fintech business, which includes WeBank and the Tencent Pay and WeChat Pay payment systems. She believes Tencent can leverage its ecosystem to dramatically scale up the payments business in Asian and other emerging economies. The company obtained an e-payment licence in Malaysia last year and plans to roll out its WeChat ecosystem, notably WeChat Pay, across Southeast Asia. “Just as Facebook has grown to become a truly global tech company and brand, Tencent has similar global growth aspirations, as both an investor in complementary technology platforms and a technology business,” says Tan.

What’s next for Tencent? Look for it to focus on payments, cloud and video over the next three years, alongside its overseas expansion. That would be like an Asia-focused Mastercard, Netflix and Amazon Web Services businesses in the early stages of development. Currently, cloud and payments are losing a ton of money for Tencent, though it is just starting to turn the corner on its video business. Bernstein’s Vajpayee says the strength of Tencent’s core business is helping soften the drag from new adventures.

Now that it is recognised as one of the world’s four largest internet companies alongside Alphabet, Facebook and Amazon, look for Tencent to grow even faster inside China on the traditional turf of its better-known rival, Alibaba. Already, Tencent has bought stakes in physical supermarket chains as well as online retailer Vipshop and owns a stake in Alibaba’s fierce rival JD.com. It is likely to take a bigger share of China’s e-commerce pie over the next few years at the expense of Alibaba, says Tam.

Even as Tencent continues to grow its top line significantly year after year, its gross margins have plummeted from 70% in 2010 to under 50% currently, and are likely to decline for another three quarters before stabilising. That means it might not beat analyst estimates as it consistently has over the years. Whether that hurts Tencent stock in an environment in which investors are willing to pay a huge premium for top-line growth is unclear. Tencent stock currently trades at 60 times this year’s forecast earnings compared with Amazon, which trades at around 120 times 2018 estimated earnings. If the market continues to reward investors the way it has, Tencent has as good a shot at being the world’s first trillion-dollar firm alongside Apple, Amazon and Alphabet. It just needs to collect and harness data more carefully to avoid antagonising the source of the data — Chinese citizens.