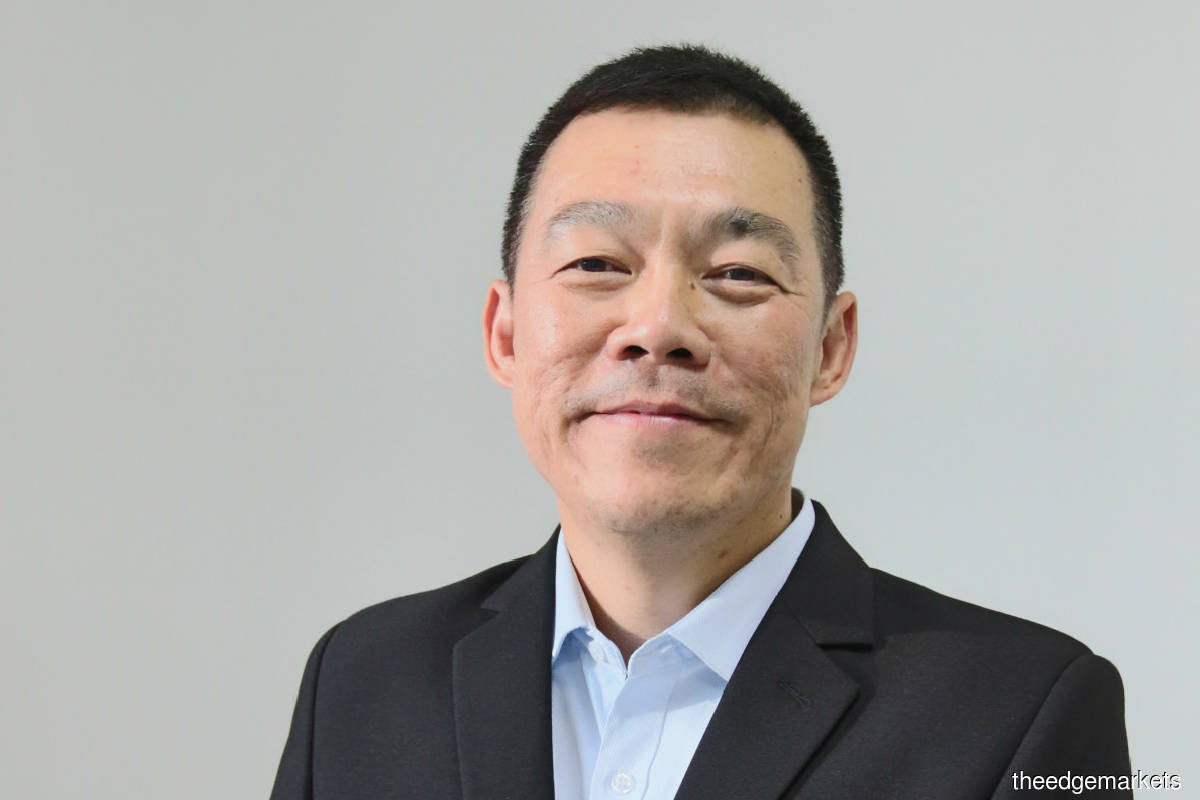 Cheah: We want to be a ‘Doraemon’ for our customers — if you need a solution, you can come to us and we will pull it out of our pocket for you (Photo by Oppstar Technology)

The premier IC design service firm, which has been profitable since its incorporation in 2014 — with the exception of the first year of operation — is now ready for an initial public offering (IPO).

According to Oppstar co-founder and chief technology officer Cheah Hun Wah, the plan is to raise at least RM100 million.

“Oppstar is a profitable company, but our pockets are not deep enough. So, going for a listing is definitely one option for us to raise funds and grow further. If you look at our profitability, coupled with our resources, capabilities and customers, we are ready for listing,” he tells The Edge in an exclusive interview.

As keen as Oppstar is in taking the IPO route, Cheah acknowledges that the company can raise fresh capital via other avenues or corporate exercises, if they make better sense.

He discloses that Oppstar has been talking to private equity (PE) firms, as the company hopes to rope in strategic investors that can take it to the next level, but there has been no material development so far. Oppstar intends to bring the world’s highest-end technology to Malaysia, and to set up an IC design hub in the country (Photo by Oppstar Technology)

“For the IPO, we have not set any specific time frame, but we are looking at it very seriously. Whether it is the Main Market or ACE Market, it depends on various factors. Our company has grown quite fast over the last seven years. Hopefully, we can grow faster in the next few years,” Cheah says.

Bursa Malaysia is not a shoo-in for the IPO, however, as Oppstar is in talks with several bourses in Asia as well.

“We are exploring not just Bursa but also the foreign stock exchanges. Frankly, we love Malaysia, this is our country. So, of course, we will prioritise Bursa,” he says.

Considering that the semiconductor-related companies listed on the local stock exchange are mostly outsourced semiconductor assembly and test (OSAT) players and automated test equipment (ATE) manufacturers, the potential listing of Oppstar would provide an additional option for investors looking for semiconductor exposure in their portfolio.

“One positive development that we have noticed lately is that investors in Malaysia have more understanding of the semiconductor industry. Having said that, I think they still need to be better educated on front-end design companies like ours. Today, most of them are quite familiar with OSAT and ATE, but Oppstar is in a unique position, not just in Malaysia but also in the region,” contends Cheah.

The semiconductor manufacturing process begins with the design of IC — a set of electronic circuits consisting of miniaturised electronic components built into electrical networks. The ICs, also known as chips, are produced on a flat piece of wafer made of pure semiconductor material, normally silicon.

Employing its state-of-the-art process technologies in the dimension of nanometres, Oppstar designs chips used in computers, mobile phones, artificial intelligence (AI), Internet of Things (IoT) and the automotive industry. It is estimated that the market demand for IC design in China alone is US$50 billion (RM206.5 billion) a year.

That is precisely why Oppstar wants to evolve from being a local champion to becoming a global player. In its first three years of operations, the company had largely been dependent on local business opportunities. But as it moves overseas, Oppstar will be able to offer its services to Singapore, China, Japan, South Korea, Turkey, Egypt, Germany, the US and other countries highly interested in developing ICs.

“Oppstar has been known as a contract chip designer. But today, we can work with almost everyone from different industries. We want to be a ‘Doraemon’ for them — if you need a solution, you can come to us and we will pull it out of our pocket for you. For instance, we could partner with a coffee maker to put in an AI chip and AI solutions into its coffee machines,” says Cheah.

He adds that Oppstar does not serve a specific sector or country, and that its business does not rely on a single dominant product or customer.

“We cover a rather wide area. Besides smart devices, we are also involved in medical and life sciences, as well as automotive and sensors. More than 60% of our business comes from multinational corporations (MNCs) and Fortune 500 companies. In this field, if you have no budget, you won’t be able to build IC.”

Oppstar began its operations by supplying resource augmentation services to MNCs, but has since developed into a provider of project-based design outsourcing solutions. In recent years, it has upped the ante and transformed itself, so that it is now capable of designing chips from top to bottom.

“The customer gives us the spec and we transform that into a final design ready for tape-out for fabrication. We are now also doing full intellectual property (IP) turnkey or product turnkey design for clients across the globe, from the West to the Middle East to the East,” Cheah elaborates.

For example, he says, any IoT or electric vehicle (EV) company may approach Oppstar to design proprietary chips for it, and these chips are solely for its use and no one else’s.

“If you look at the likes of Google, Amazon, Alibaba and Facebook, all these technology giants want their own chips for control and their IP ownership, but they may not have their own chip design team. They can engage companies like ours to do that for them on some of the IPs or full chips. This is where we can bring our experience to the table,” says Cheah, adding that Oppstar is eager to work with these MNCs, as they have the volume for final chip consumption and can define what they want specifically.

Cheah concedes that Oppstar is not going to be the next Broadcom Inc or Qualcomm Inc — the top fabless companies in the world — but it aims to find its own path in the fast-changing technology sector.

“Our business model continues to change and evolve. We may venture into new market segments that may not even exist yet. We have always believed that what has brought us here may not bring us to the future,” he stresses.

But Cheah reiterates that Oppstar is at the forefront of today’s technology, and that new technology evolves every second, owing to the advancement of semiconductor shrinkage in order to pack more powerful chips in a smaller space.

“In Malaysia, not many companies are engaged in top-notch technology like we are, even among the many MNCs. And there are not many serious players like us in the country. The chip design market is huge and continues exploding as various countries and regions try to be less reliant on other countries in the aftermath of recent trade wars,” he says.

The worldwide semiconductor market is worth more than US$400 billion, and the numbers are expected to grow beyond US$500 billion between 2025 and 2030.

“With 5G (fifth-generation) proliferation and subsequent IoT implementation, there will be 25 billion connected devices in use around the world by 2030. Then, there are electric vehicles and future autonomous driving, which more and more specialty silicon chips will be needed to power. That will supercharge a lot of IC design and development excitement ahead,” Cheah predicts.

Oppstar is aiming high, as it intends to tackle the high-end niche markets with its advanced process technology.

“When Oppstar was incorporated in 2014, we set the goal to compete in foreign markets and not just in local markets. That’s how ambitious we are. Over the years, we have acquired IC design core technologies and competencies, and built up an experienced design team. We built our company brand name through solid track records with both local and foreign MNCs,” Cheah says.

Given the global shortage of IC design talents, he believes Oppstar will be well positioned to take on new opportunities in a far more aggressive way. His ambitions for Malaysia are also not modest.

“Ideally, we want to bring the world’s highest-end technology to Malaysia. We want to set up an IC design hub in the country. We hope that all the world’s top IC designers will be here,” Cheah says passionately.

Oppstar has about 200 employees in Malaysia and hopes to expand its workforce to between 280 and 300 by year-end.

“Obviously, we are still very small. The likes of AMD (Advanced Micro Devices Inc) and Intel Corp are employing tens or even hundreds of thousands of people. At this point in time, it is very difficult to see how we can be as big as they are. But if we could have 1,000 to 2,000 people as our anchor workforce focusing on the front-end IC design, we are going to achieve something big,” says Cheah.

“In this game, we need scale. To grow to this size and reach this scale, obviously, we need funds. That is why we are now looking at an IPO.”