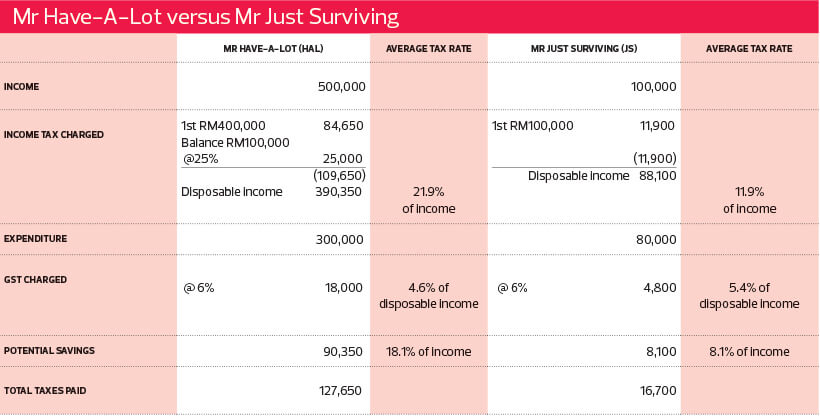 The US Republican Party's tax reform bill - on the brink of being voted on at the time of writing and has since been passed and signed into law by President Donald Trump - got me thinking about the basics of taxation, hence these musings.

In the present-day context, taxation is:

- a compulsory collection of money, legitimised by law;

- by a levying authority, usually a national government;

- from the residents/citizens of a country;

- based on their earnings, property and consumption of goods and services; and

- to fund public expenditure, such as the police, courts, the military, public transport, public education, public health and welfare, and so on.

Taxation has multiple objectives. The most important three are:

Tax revenue funds a significant portion of public spending and provides a constant stream of revenue to the government. For instance, the Goods and Services Tax collects tax from a broad base (read: most people are caught most of the time) at a common fixed rate (read: regardless of whether you are rich or poor). It is invasive (into business activities), ubiquitous, that is, payable every time a good or service is consumed, and constant, thus ensuring a 24/7 stream of revenue to the government.

The progressive nature (higher income bands are subject to higher rates of tax, raising the average rate of tax relative to the person's total income) of direct tax, notably income tax, aims to redistribute wealth and reduce income disparity via the Robin-Hood modus operandi: tax the rich more steeply to help the poor.

- As for GST, while the rate is flat at 6%, as a proportion of disposable income, HAL bears 4.6% while JS pays 5.4%. This shows the regressive nature of the flat tax.

- Taking both income tax and GST, HAL's contribution to national coffers is 7.6 times that of JS.

- Despite the higher tax paid by HAL, he is still able to save a good 18.1% of his income while JS manages only 8.1% savings.

The conclusion? It is alright to tax the higher income group progressively more as long as it does not impede the ability to save.

You may want to draw other conclusions.

Taxation is also an effective tool to influence behaviour. For instance, to inculcate the reading habit, the government offers tax relief for the purchase of reading materials; to discourage smoking and drinking, there is the "sin tax", which imposes high taxes on cigarettes and alcoholic drinks; and to encourage the business community to invest in the country, the government offers tax incentives for investments and re-investment.

Hitherto, the rationale for high taxes has been to provide for welfare, healthcare, children's education and a social safety net for all who need them. It is easy to see that high tax rates - 30%, 35% or even 40% - are punitive and tend to discourage hard work and industry. When the rates are high, it makes it worthwhile for taxpayers to avoid or even evade tax.

Low tax rates are rationalised on the basis that money is left in the hands of taxpayers, available for consumption of goods and services and for investment. This increases purchasing power, stimulates economic activities and their multiplier effect leading to more economic activities.

The challenge is to achieve the "goldilocks" strategy - not too high, not too low. Singapore and Hong Kong have the lowest rates for companies and individuals: about 17%. Compare this to 30% or even 35% in some developed nations and one can easily appreciate the motivation to move businesses to lower tax regimes. When tax rates are low, many taxpayers tend to willingly and voluntarily comply and pay their dues.

Voluntary compliance is desired as it is much less costly than enforced compliance through audits and investigation. Voluntary compliance may be achieved through better education of the taxpaying public. A buy-in by the taxpayers is also a function of voluntary compliance: this buy-in is encouraged by transparency and proper utilisation of taxpayers' money. If a taxpayer perceives that there are leakages and mismanagement of government revenue, the incidence of non-compliance tends to be higher. Therefore, governments must demonstrate that the taxpayer's money is being used judiciously, for the common good, and not squandered or siphoned off.

The cost of compliance should also be kept down. A high cost is a disincentive for compliance. Therefore, governments should simplify the tax code, and minimise/simplify income reporting.

This is another important area. If a country practises the world scope on its citizens/residents/domiciles, all income, regardless of where it is earned/derived, is subject to tax in the home country.

The territorial scope, on the other hand, only catches the income derived from within the country's borders.

One can easily envisage that under the world scope, taxpayers, being human, would be sorely tempted not to disclose offshore income.

Jurisdictions like Malaysia and Hong Kong are realistic in adopting the territorial scope. They subject to tax only the income arising from within their territories, and fully and readily exempt foreign-sourced income. This provides a huge incentive/motivation for taxpayers to bring back their foreign income, which then produces favourable economic multiplier effects.

A judge in a tax case famously held that it is not the duty of a citizen to hand over the greatest portion of his or her income to the state. It is natural to want to pay the least amount of tax, provided it is done within the law.

Among the tax fraternity, there is the emerging concept of tax morality. Public opinion clearly calls for corporations operating in a country to pay a "fair share" of taxes. In this respect, the Organisation for Economic Cooperation and Development has come up with the concept of Base Erosion Profit Shifting. Governments are increasingly vigilant against the shifting of profits from high-tax jurisdictions to low-tax or no-tax jurisdictions. Accordingly, transfer pricing audits, withholding tax, general anti-avoidance tax provisions and so on are being wielded to preserve the tax base.

I will leave you with these thoughts and wish you a Happy New Year and a prosperous Chinese New Year!