Taxi fares go up immediately, express bus from May 15 - SPAD 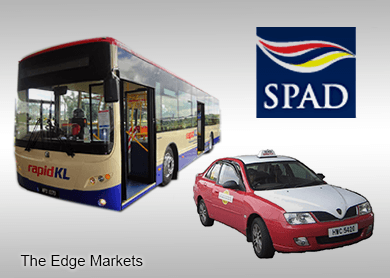 SPAD estimates it would take taxi drivers and operators about two months to have the meters recaliberated, before taxis could charge the new rates.

On the fare hikes, Syed Hamid said: "The revision which aims to align the fares to actual operating costs, also strikes a fair balance between the welfare of passengers and the drivers as well as the operators," Syed Hamid said.

He said the taxi fare adjustments were done in consultation with various stakeholders before the decision was made.

"These fare adjustments have factored in the GST (Goods and Services Tax), although these fares have no GST, but the business operating costs do incur GST," he said.

Mohd Nur also estimated that there would be another revision for railway fares within the year, but stressed that would depend on KTM Bhd and Syarikat Prasarana Negara Bhd carrying out the fare review exercise.

Mohd Nur also disclosed that SPAD had been informed by the Economic Council  that Petroliam Nasional Bhd would increase the pump price of Natural Gas for  Vehicle (NGV), which is equivalent to compressed natural gas, to  RM1.05 per litre, a 54.41% hike from 68 sen per litre.

The last review of NGV pump price was in 2005, while taxi and express bus fares were last reviewed in 2009.

Mohd Nur also reminded taxi operators that they would have to charge existing rates until their meters had been caliberated.