Talking points: Design news from around the world

Hip-hop vehicle
Musician and entrepreneur will.i.am is lending his creative touch to a new, personally designed Lexus NX. It sees the artiste’s innovative personality combined with the eye-catching angles of the NX 200t F Sport, aimed at young, urban and design-oriented customers.

will.i.am’s contribution to the design is reflected in its body — now lower and wider, it incorporates an arresting blend of brushed aluminium, carbon vinyl and his signature monochrome, matte pearl-white paintwork, and a black tinted panoramic glass roof. Inside, the stylised bespoke car features a distinctive combination of high-performance aluminium and contrasting soft materials to create a bold and luxurious interior.
As can be expected for a multi-platinum artiste, the audio system inside this sports SUV is truly top of the line — a Lexus NX 10-speaker Pioneer surround sound system that consists of 16cm speakers in the front and rear doors, and a set of 6.5cm speakers mounted in the instrument panel.

One of the most innovative features of will.i.am’s bespoke NX is the ability to capture panoramic photographs and video footage whilst driving. Built into the customised body kit are four 180° interconnected camera lenses, and the media captured can then be displayed on the smartphone screen of the driver or passenger, instantly via Bluetooth. 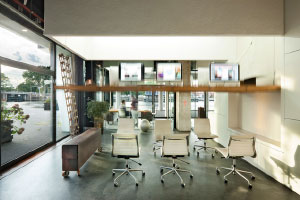 Disappearing desks
In an effort to instil proper work-life balance among staff, an Amsterdam-based design studio has created workdesks that disappear once office hours are done. At 6pm sharp, desks are lifted into the ceiling using a key-operated lifting mechanism and steel cables. Computers, stationery and paperwork are left in their exact positions for the morning, leaving Heldergroen’s employees no choice but to step away from their work.
Once the desks have been lifted, the office space is available for employees to use however they like, as long as it’s not work related. Options include yoga, dancing and any other creative activity. 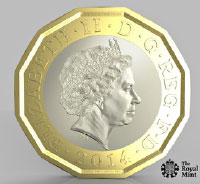 Money matters
You have until the end of October to submit your chosen design for the brand new pound coin, scheduled to be in circulation in the UK come 2017. This unusual competition allows members of the public, professional artists and designers alike to put their art on the reverse (the “tails” side) of what will be the UK’s newest coin, one of the most eagerly awaited coins in circulation. The winner will receive a £10,000 (RM53,037) design fee and the priceless pleasure and pride of seeing his or her design replicated on millions of coins that will be used in the UK for years to come. The winner will also be invited to The Royal Mint to see the design transformed into actual coins.
The coin, which has a gold-coloured outer ring and a silver-coloured centre, would be the most secure coin in the world, the Treasury said. As well as the bi-metallic construction, similar to the £2 coin, the revamped pound will have banknote-strength security.

According to the rules of the competition, the denomination must appear as part of the design, but it is left to the designer to decide where it is placed. The coin must not include a recognisable likeness of a known person, whether living or dead, and must be the entrant’s own work. Artworks can be created in pencil, ink, paint or using computer software, but 3D entries are not allowed. Designs must be presented on a template, which can be downloaded from the Royal Mint’s website. There is no rule about nationality, so it does appear that just about anyone can submit their entry. 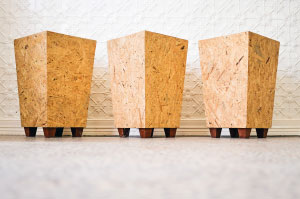 Reclaimed glory
In an age where even upcycling has become the norm, Australian craftsman Brett Sambrooks is taking things a step further by handcrafting furniture collections from reclaimed timber and second-hand materials. The results are “third-hand” items that are one-off, collectible pieces that reflect his personality: bold, structured, creative and experimental.
Sambrooks is based in Koondrook, a small Victorian town nestled on the banks of the Murray River, where he crafts pieces that often have a story — for example, a timber table made from a bookshelf that was crafted from floorboards that were once factory off-cuts.
Sambrooks is renowned for his handmade wooden surfboards and signature red gum butcher’s blocks — a nod to his home’s past life as Koondrook’s butcher shop. An adventurer at heart, he has lived and worked in Antarctica as an on-site builder for a research base and he is a keen surfer as well. 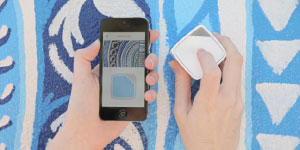 Shazam for colour
Three Melbourne-based designers are doing for colour what Shazam does for music: tell you what it is. SwatchMate Cube is a cool new gadget that captures the colour of any surface and sends the information via Bluetooth to your smartphone or directly into Adobe Photoshop, indicating the RGB, CMYK or Pantone colours used in the scanned surface. If the Cube cannot connect to any device, it will store up to a maximum of 20 swatches.

Co-founders Paul Peng, Djordje Dikic and Rocky Liang designed the Cube to work both as a device for designers and artists to gain inspiration from natural colour sources, but also as a means of colour-grading their images, essentially making nature another tool in their kit.

Peng says the cornerstone of their product design was feedback from people who use colour. “We talked to home renovators who couldn’t find any affordable tools to match paint colours,” says Paul, “and from there we realised a range of people would benefit from a product that could instantly match colour.”
After winning the 2013 Melbourne and Sydney Design Awards (while shortlisted for the 2014 Brisbane Design Awards), SwatchMate rounded out 2014 with a successful Kickstarter campaign. The gadget can now be pre-ordered on its website. 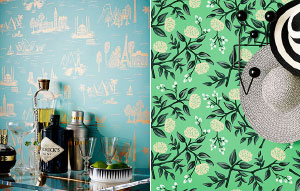 Inspired wallpaper
When recounting the most exciting moments in design history, the opulence of baroque interiors comes to mind — a suitable inspiration for a collection of designer wallpaper by US-based stationery and paper company Rifle Paper Co. While a sleek and modern design aesthetic may have put an end to ornate décor and baroque influence, the Rifle Paper Co x Hygge & West collection looks to the past for inspiration with its line of retro wall covers.

Celebrating the popular return of vintage design accents — a theme echoed by the autumn/winter season fashion collections as well — this collaboration features a versatile wall décor range. Whether adorned with urban skyline imagery or botanical graphics, this designer wallpaper collection is sure to appeal to vintage design lovers and those with an appreciation for vibrant wall decals, bold artwork or intricately embroidered tapestries 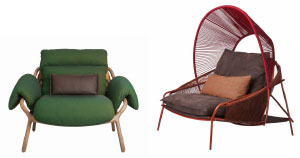 Intercontinental creativity
To celebrate 40 successful years in the US, French luxury furniture company Roche Bobois worked with American designer and traveller Stephen Burks to create a special collection of chairs that bridge the gap between travel and design. It is a collaboration that explores a traveller’s perspective of both America and Europe through an object in which the user can get lost and travel through thought and contemplation.

The exploration of the two chairs is expressed in the shape of its frame and the materials used in its construction. The European chair is constructed by weaving leather cords over a metal frame, and covered with leather cushions while the other chair is wholly Americana, made of ash wood and rich leather straps and over-stuffed cushions.

An industrial designer, Burks has worked with top global furniture firms and has even designed a line of men’s loungewear called A Free Man for Swedish firm The White Briefs. His design studio, Readymade Projects, is based in New York. Through an ongoing project he has dubbed Man Made, Burks also explores local craftsmanship techniques from around the world.

This article first appeared in The Edge haven, on Issue #69 October + November 2014.