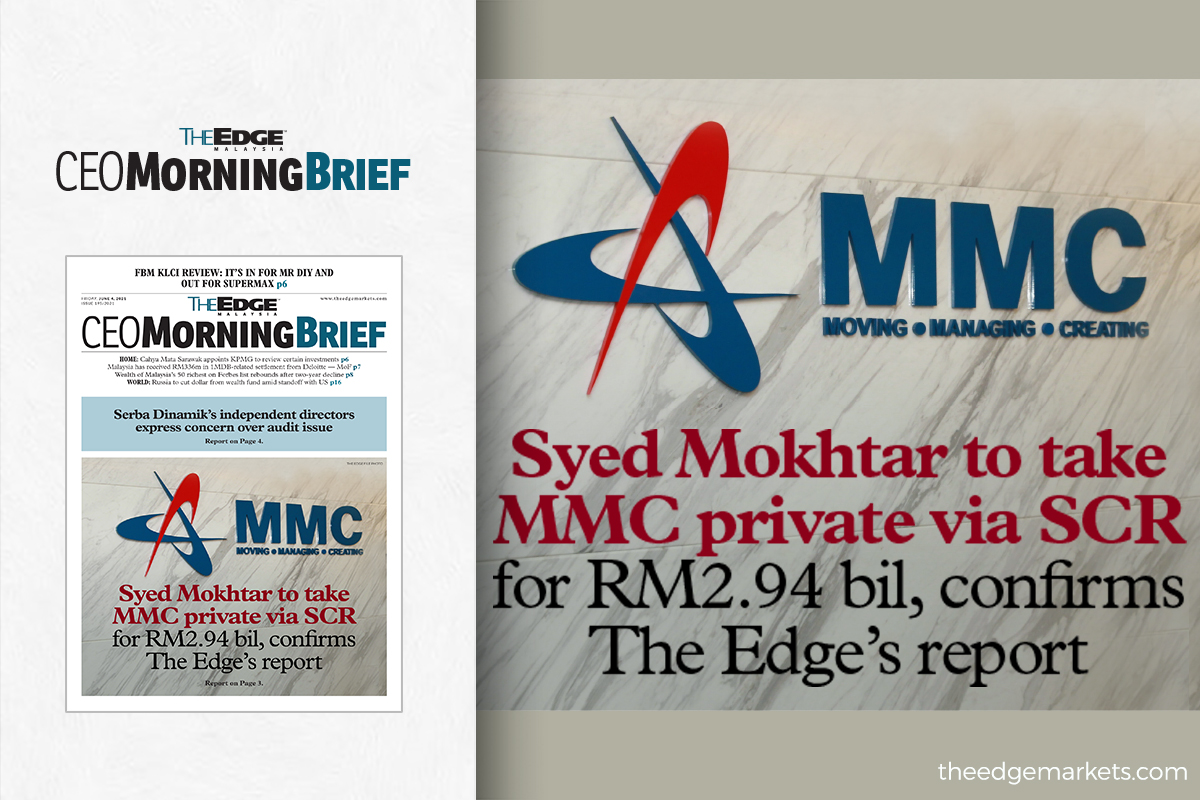 In a bourse filing, Syed Mokhtar’s vehicle Seaport Terminal (Johore) Sdn Bhd (STJSB), which owns 51.76% or 1.58 billion shares in MMC, announced that it would be conducting the exercise for the 1.47 billion shares or 48.24% stake it does not own in the company.

In total, STJSB would be spending RM2.94 billion (RM2 per share) under the SCR to cancel 1.47 billion shares. MMC’s latest issued share capital stands at 3.05 billion shares, worth RM2.34 billion.

STJSB said that as the capital reduction of the SCR exercise is higher than the existing issued share capital of MMC, the diversified group will conduct a bonus issue of shares to facilitate the SCR, in order to ensure that its share capital is at a sufficient level where the SCR can be executed.

“All MMC shares to entitled shareholders including the new MMC shares to be issued pursuant to the proposed bonus issue will be cancelled pursuant to the Proposed SCR. The bonus shares will be cancelled immediately and will not be credited into the central depository system accounts of the entitled shareholders or be listed on the official list of Bursa Malaysia. For the avoidance of doubt, STJSB will not be entitled to the bonus shares,” the filing explained.

As a result of the exercise, MMC would then become a wholly-owned subsidiary of STJSB, which does not intend to maintain MMC’s listing status.

According to STJSB, the SCR was being done to allow greater flexibility to MMC in managing and developing its existing business, while exploring opportunities without regulatory restrictions and compliance costs associated with its listing status.

At the same time, the Syed Mokhtar-controlled vehicle added that this will allow shareholders to exit the company and realise their investment, noting that the offer is 70.94% to 99.54% above MMC’s historical market price.

“The investors appear to be unable to accord MMC with a valuation in line with its net assets, as the market price of MMC shares does not reflect the underlying value of its diversified business,” Seaport Terminal added.

The exercise is subject to shareholders approval at an upcoming extraordinary general meeting (EGM). The offer is open until July 15.

The announcement confirms The Edge’s earlier report that MMC would be privatised via an SCR at RM1.80 to RM2 per share. The conglomerate is perceived to be undervalued partly due to the discount on valuation as it is an investment holding company. Over the past five years, MMC's share price has been on a decline from the peak of RM2.50 to a low of 42.1 sen in March last year. For comparison, in terms of its price to earnings (PE) ratio, MMC is trading at a trailing twelve months (TTM) PE ratio of 8.27 times, based on its last traded price of RM1.30. Meanwhile, Westports Holdings Bhd’s TTM PE ratio stands at 27.12 times. Both entities are involved in the port business. MMC, however, operates more ports compared with Westports.

Sources familiar with the exercise said the privatisation is to pave way for a bigger restructuring exercise that could involve the listing of MMC's port business.

As at March 31, MMC’s balance sheet shows that its cash balance was at RM553.3 million, while “other investments” amounted to RM2.076 billion.

MMC is mainly involved in the ports and logistics, energy and utilities, engineering and industrial development sectors. It holds 38.45% in Malakoff Bhd.