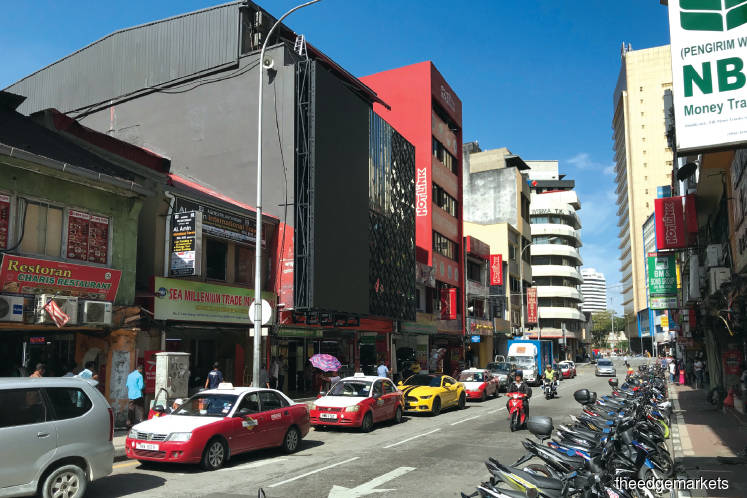 Upon arriving at Jalan Tun Tan Siew Sin, it was a pleasant surprise to see light traffic despite being in the city centre and connected to a few major roads.

On its northern side, the street intersects with Lebuh Ampang, Medan Pasar and Jalan Benteng while on the southern side, it leads to Jalan Pudu and Jalan Tun Tan Cheng Lock, which is named after the father of Tun Tan Siew Sin. An unnamed small road connects it to Jalan Tun Perak.

However, Macao Street and Hokkien Street no longer exist. They were merged, and officially named “Old Market Square” in 1893, and renamed to Medan Pasar in the early 1960s.

As it is joined to several roads, the name Cross Street is self-explanatory. However, according to JM Gullick’s History of Kuala Lumpur 1856–1939, the street could have been named after an Inspector Cross, who was an officer of the Selangor Police Force, in charge of the Residency Guard.

After Malaya achieved independence in 1957, the name was changed to Jalan Silang, a direct translation from its English name. In 2003, it was renamed Jalan Tun Tan Siew Sin, in honour of the country’s first minister of Commerce and Industry of Malaya, finance minister and third president of the Malayan Chinese Association Tun Tan Siew Sin.

The street is now part of the city’s Chinatown and boasts more modern buildings and shops compared with other streets in the area, which have retained more of their traditional shophouses.

According to Zerin Properties group CEO and founder Previndran Singhe, Jalan Tun Tan Siew Sin, in recent years, has become a focal point for foreign workers and traders, particularly from Bangladesh, Myanmar and Nepal, who sell products from their home countries. Hence, the street took on a new identity and earned the moniker “Little Dhaka”.

Other businesses along the street include restaurants that offer traditional ethnic fare such as Nepalese, Bangladeshi, Burmese and Chinese cuisine, as well as boutiques, music stores, a clinic and a convenient store.

Mydin is located at the intersection of Jalan Tun Perak and Jalan Tun Tan Siew Sin. The bus terminal there is usually bustling with taxis and buses alike.

Opposite the terminal, Previndran recalls that apart from Soong Kee Beef Ball Noodles, was a McDonald’s that was a hangout place during his schooling years in Methodist Boys’ School, Kuala Lumpur.

“The bus terminal used to be a bus hub for Methodist Boys’ School, Victoria Institution and other schools. It was a great place to meet up and occasionally sneak a burger and shake when we could afford it!” he reminisces.

Data provided by Previndran shows the latest transaction for two shoplots with a built-up of 6,129 sq ft, in December 2015, sold for RM759 psf in Jalan Tun Tan Siew Sin. The current asking price for a similar shoplot is about RM1,000 psf.

For a multi-storey shopoffice, the asking price is about RM400 psf while rent costs RM11 psf a month.

The street and its surrounding area will continue to be an attraction for tourists, Previndran says.

“It forms part of Chinatown,which is one of Kuala Lumpur’s most historical districts with lively street markets, hawker stalls and eateries. Moreover, with public transport such as the light rail transit, mass rapid transit and city buses within walking distance, the property prices at the surrounding area will remain competitive,” he says.