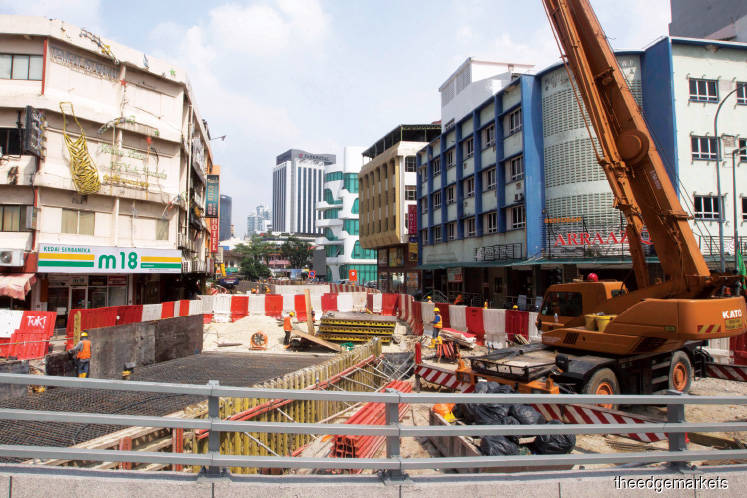 There are ongoing roadworks at the junction of Jalan Melati and Jalan Barat (above); part of Jalan Barat faces the 70-acre Tun Razak Exchange (right) It was raining on the morning that I did a recce of Jalan Barat in Imbi, Kuala Lumpur, and the coffee shops and mamak stalls there were filled with workers from the nearby building and road projects.

As there are a few Jalan Barat in the Klang Valley, this street in KL is generally known as Jalan Barat off Jalan Imbi. Literally meaning “west road”, the street was named in 1965.

Stretching from the junction of Jalan Imbi near Jalan Imbi Chapel to Jalan Changkat Thambi Dollah, Jalan Barat is known for the pork noodles served at Restoran Win Heng Seng near Jalan Imbi.

Upon its completion, TRX will boast 30 buildings and 3,800 residential units while 23% of it will comprise public parks and open spaces. The buildings are slowly coming up with the 27-storey Menara Prudential being the first office building to be completed in the development. The Grade A, LEED gold-certified and MSC-status building offers a total space of 51,018 sq m.

It was reported that the insurance company will occupy between 70% and 80% of Menara Prudential while the remaining space has been leased out. The building is owned by IJM Corp Bhd and was developed by its subsidiary, IJM Construction Sdn Bhd.

Another upcoming skyscraper in the area is The Exchange 106, formerly known as TRX Signature Tower. Upon its completion, the 106-storey building will be one of the highest, if not the highest, buildings in Southeast Asia at 492m and offer a net lettable area of 2.6 million sq ft. In January last year, it was reported that about 47% of the area had been formally signed for.

Another significant building in the area is The Exchange TRX — a 17-acre development comprising residential, hotel and retail components. It is a 60:40 joint-venture between Australian-listed Lendlease and TRX City Sdn Bhd (the master developer of TRX).

Metro Homes Realty Bhd executive director See Kok Loong says the shophouses in Jalan Barat suffered a setback in the past due to the construction of TRX as well as their location away from the core Jalan Imbi area.

When I stopped by Jalan Barat for bak kut teh last year, the shophouses near Jalan Changkat Thambi Dollah could not be approached from the main road due to the roadworks. One had to access them through Jalan Horley.

“However, with the completion of the office buildings in TRX, complemented by the nearby Tun Razak Exchange MRT station, we expect high human traffic in Jalan Barat soon. The prospects there are good,” See says.

Based on the recce, it seems that there is light at the end of the tunnel for the shophouses in Jalan Barat as the street now boasts proper walking paths and well-paved roads. Ongoing roadworks at the junction of Jalan Melati and Jalan Barat have split the latter into two. Depending on which shop you are going to, you have to enter Jalan Barat from Jalan Imbi or Jalan Changkat Thambi Dollah.

Besides Restoran Win Heng Seng, the street is also home to the Kechara Soup Kitchen Society and the National House Buyers Association.

See says a 3½-storey shophouse was transacted in Jalan Barat last year. With a land area of about 2,000 sq ft and total built-up of 8,000 sq ft, the shophouse was sold for RM8 million. See expects this price trend to be maintained until TRX is fully completed.