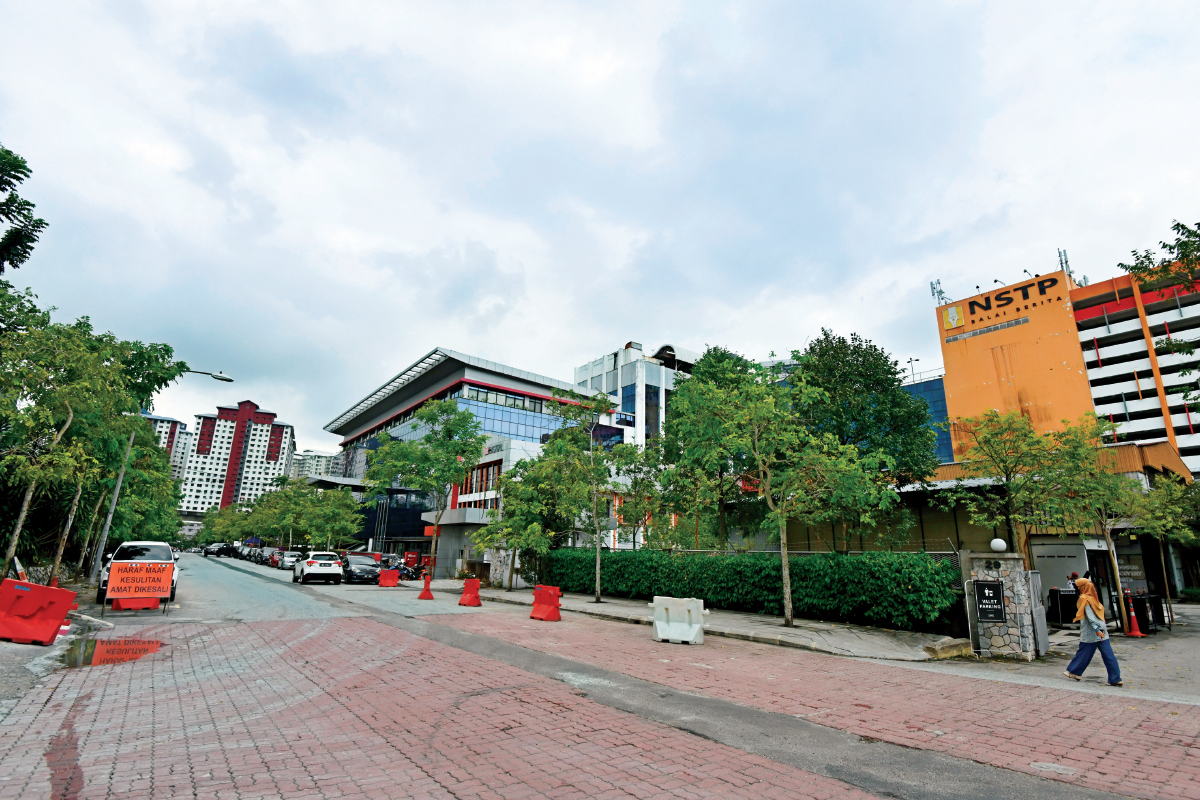 Café-hopping has become a thing in Jalan Riong, Bangsar. The street, once full of whirring and beeping sounds, is now filled with chatter, laughter and the clanking of plates and cutlery.

Turn into Jalan Riong from Jalan Bangsar and you will pass a 99 Speedmart convenience store, Leeyas Corner restaurant and the offices of The China Press Bhd and Media Prima Bhd.

One of the notable buildings in Jalan Riong is the NSTP premises. According to PPC International Sdn Bhd managing director Datuk Siders Sittampalam, the 3.64-acre site was acquired in 1972. It is now known as Balai Berita, he notes.

“The transacted price appeared to reflect its redevelopment value. The Kuala Lumpur City Plan 2020 indicates that the site is currently zoned for mixed-use development, primarily commercial use such as high-rise retail, offices and residential, including hotels.”

Nestled at the very end of Jalan Riong is Art Printing Works Sdn Bhd (APW), which was established in 1952 as a commercial printing factory. The company was initially located in Lebuh Ampang before moving to Bangsar in 1965.

For decades, Jalan Riong had been known as one of the biggest media and printing centres in the Klang Valley. The 1960s to the 1980s were the glory days of APW as it was hailed as one of the most prolific printers in Kuala Lumpur.

“Over the years, the older-styled printing factory became technologically obsolete and this led the owner to convert the industrial space into an F&B hub — with cafés as well as event, exhibition and co-working spaces, including pocket parks — in 2013,” says Siders. Today, APW is known as A Place Where by APW and it is recognised for its cafés and diverse cuisines such as PULP, Breakfast Thieves, Chuck’s, Flat Earth Tacos, Grano, Hokie Pokie, Kaiju and Olivia Deli.

PULP by Papa Palheta from Singapore happens to be the establishment’s flagship store in Malaysia. The café specialises in purveying and roasting coffee with unique brewing techniques using micro-production roasters.

Then, there is Melbourne’s popular Breakfast Thieves. The café has a glasshouse concept. It is surrounded by greenery and has a rustic industrial interior with wooden chairs and tables. It specialises in modern Australian brunch fare with an Asian twist.

There is also a rustic warehouse concept space that is often rented out for workshops, artisan markets and performances organised by corporations, entrepreneurs and artists.

Parking space is limited in Jalan Riong. Both sides of the street are usually full of cars on weekdays and it is pretty much the same on weekends.

In the vicinity of Jalan Riong is Lorong Kurau, which has been home to a number of shophouses for a long time. “Lorong Kurau, comprising 2-storey shophouses supported by a few rows of 2-storey terraced houses, was once known as the twilight zone of Bangsar. Over the last 10 years, the shophouses have seen renewed interest from niche F&B outlets and mid-sized professional service firms [which are interested in the upper floors],” says Siders.

Another popular landmark between Jalan Riong and Jalan Maarof was the Unilever headquarters. “The Unilever site, comprising 19.6 acres of freehold land, was bought by Pelaburan Hartanah Bhd (PHB) from Railway Asset Corp in 2011 at an attractive price of RM150 psf,” he says.

“The Kuala Lumpur City Plan 2020 indicates that the land (Lot 20001) is zoned as major commercial, and we understand PHB has plans to develop this site into a mixed-use development to be known as Bangsar 61, which will comprise seven towers.”

Siders is optimistic about the outlook for Jalan Riong. “Jalan Riong itself is a relatively small pocket of development within the larger Bangsar area and the parcels in the locality are generally large development land. As such, there is a dearth of sale transactions in the locality. In addition, most parcel owners are holding on to the land for development purposes,” he says.

“Suffice it to say the parcels in the immediate vicinity are choice development land given their proximity to the city centre and availability of public transport such as the Bangsar and Abdullah Hukum Light Rail Transit (LRT) stations and Mid Valley KTM Komuter Station. Generally, it can be said that with developments in the immediate neighbourhoods, such as KL Eco City, Mid Valley, and within Bangsar, a spillover effect in terms of growth is evident in the Jalan Riong locality.”