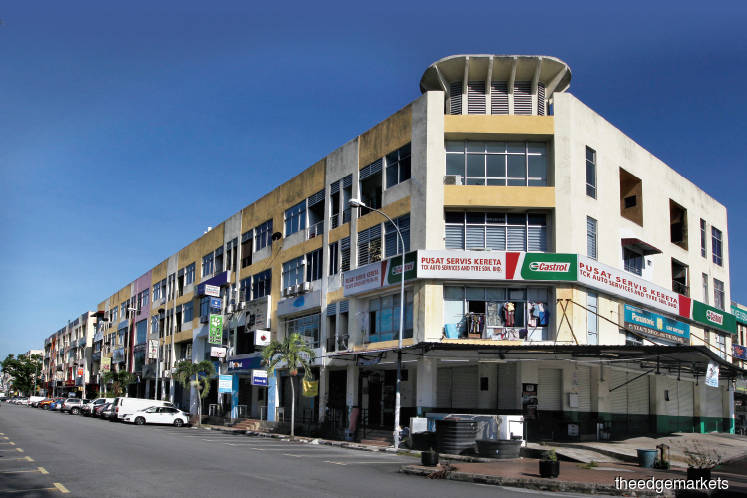 Shopoffices with an average built-up of 4,730 sq ft were transacted for RM1.7 million to RM2.6 million in the last two years. (Photo by Kenny Yap/The Edge)

Bandar Mahkota Cheras in Selangor was developed by Narajaya Sdn Bhd, a subsidiary of Lion Group, on a freehold 365ha parcel in 1999.Jalan Temenggung in the township comprises mainly 2 and 3-storey shopoffices.

According to Metro Homes Realty Bhd executive director See Kok Loong, shopoffices with an average built-up of 4,730 sq ft were transacted for RM1.7 million to RM2.6 million in the last two years, with yields of 4.5% a year. Current asking prices remain around RM2 million.

“The current rental rate for the ground floor is RM5,000 per month. The higher the unit, the lower the rent, with units on the first and second floor being rented out at RM1,500 and RM1,000 per month respectively,” he says. There is a wide choice of food options. Among them is Ko Ya Japanese Restaurant, which offers an extensive menu that includes sashimi, deep fried agenomo, stewed dishes and noodles at affordable prices.

Recommended dishes include the soft shell crab and avocado roll. Priced at RM15, the soft-shell crab is fresh and crunchy and goes well with the creamy avocado. Bits of sesame seeds and Japanese mayonnaise add flavour to the roll.

If you have cravings for seafood, especially meaty crab, head over to Four Seasons Seafood Restaurant, which is just a four-minute walk from Ko Ya.

Opened in 2015, the popular family restaurant stands out with its bright decor. Housed in a 2-storey unit, it has comfortable seating on the ground floor and four private rooms on the first floor. There is also a 35-pax function room suitable for seminars or talks.

Wong, a regular patron, says his favourite dish is the seafood pot, which is filled with crab, fresh prawns, fish fillet, squid and lala.

“The strong aromatic flavour of the crab sauce is infused with evaporated milk and coconut milk ... The dish is a pleasant combination of spicy and creamy, chockfull of fresh seafood,” he adds.

Another must-try is the choy poh (preserved radish/vegetables) steamed Patin fish. The fish is served in a savoury soya sauce, and the choy poh goes well with rice.

Wong says the quality of the food at Four Seasons Seafood is better than that at most restaurants in the area.

See notes that Jalan Temenggung is in a mature township and the outlook appears stable. “There are only several small pockets of land. As such, there will be no major developments coming up in the area,” he says.