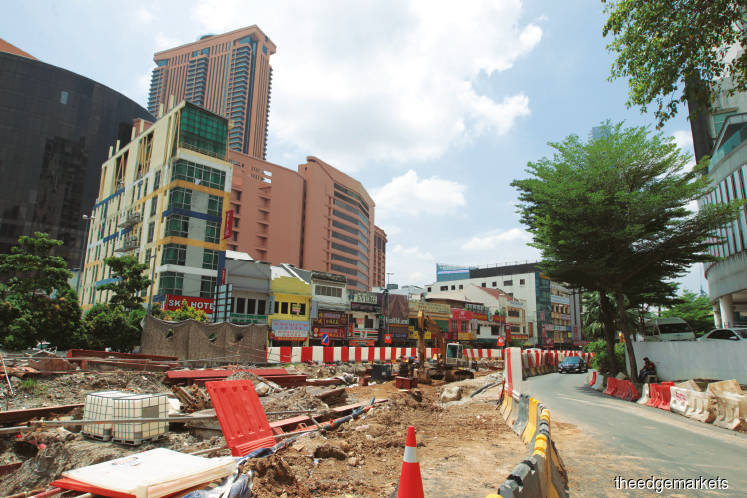 Jalan Changkat Thambi Dollah, located just off the buzzing Bukit Bintang area, is not very prominent and was often known as the street that is “just next to Berjaya Times Square”. It has been synonymous with good food since the 1960s — examples are, two Teochew restaurants selling porridge and dimsum and later, Keong Kee Herbal Soup.

The Teochew restaurants have since closed down but the area remains a food haven that offers various Chinese cuisine. Other landmarks include the refurbished Shaw Parade and Furama Bukit Bintang.

While many might not have heard of Jalan Changkat Thambi Dollah, it is set to become a main thoroughfare in Kuala Lumpur following the redevelopment of Pudu Jail into the Bukit Bintang City Centre (BBCC) and the Imbi government quarters into Tun Razak Exchange (TRX) — as a 1km stretch of street is wedged between BBCC and TRX.

Being one of the oldest streets in Kuala Lumpur, Jalan Changkat Thambi Dollah cuts through an area formerly known as Kampung Dollah or Kampung Thambi Dollah. The founder of the village, Che Pak Dollah, bought the land from an Indonesian landowner to start a coconut and pineapple plantation in the late 1800s. The street is most likely named after him, or his son Thambi Hamid Dollah, who resided in the nearby Kampung Pandan in the 1930s.

Currently, there are massive road works going on at the junction of Jalan Changkat Thambi Dollah and Jalan Pudu, which is where part of BBCC meets the former. (see map)

Upon entering Jalan Changkat Thambi Dollah from Jalan Pudu, one can see shophouses on the left and the newer buildings on the right. The parking bays that were in the middle of the road in the past have made way for road works.

The newer buildings along this street include the Mercure Hotel and Taragon Puteri Bintang.

Some shophouses have been left empty while the rest comprises hair salons, karaoke lounges, convenience outlets, hotels and restaurants with vibrant and lively signage.

Jalan Barat — where TRX is located — is less than five minutes’ drive from BBCC.

Jonathan Lee points out that the gentrification of Pudu Jail and the Imbi government quarters has converted Jalan Changkat Thambi Dollah into a main road.

“This street is the beginning of Pudu … It used to be a place that no one knew except for KL residents, but now more people know it because of the spillover effect from Bukit Bintang. It now has many Chinese restaurants (opened by Chinese nationals) and hotels,” he says.

“But, it is a relatively quiet area compared with Bukit Bintang and there is a clear separation. There are some empty pieces of land but now is not the right time to develop them. Once BBCC and TRX are ready, they will add value to the area.”

According to Lee, four shops in Jalan Changkat Thambi Dollah were sold in November 2017, with prices ranging from RM903 to RM2,576 psf. The transaction at RM903 psf was for the biggest unit — with a lot size of 13,293 sq ft — which went for RM12 million.