Revenue is on downtrend since 2009 and KBES suffered losses from 2010 to 2012. Its uninspiring performance can be attributable to increased operational costs, shortage of bus drivers, expensive bus prices and spare parts.

In 2013, turnover was flattish y-y but the company managed to turn a profit of RM2.1 million, buoyed by its higher-margin bus manufacturing segment. Bus fabrication accounted for almost half of its revenue and earnings, with the balance coming from express bus services.

However, in the first nine months of 2014, KBES fell back into the red due, in part, to upgrading costs incurred to comply with safety, health and environmental standards set by relevant authorities. Net loss totaled RM0.55 for 9M2014.

Prospects for KBES appear challenging given intense competition from other express bus operators as well as other modes of transportation such as train and low cost air carrier.

Despite its lackluster earnings outlook, the share price for KBES rose 1.5 sen or 5.2% to 30.5 sen yesterday, with nearly 1.4 million shares traded. KBES has not announced any corporate exercise or any material development. However, investors may perceive KBES as a beneficiary of lower petrol prices, given that fuel is a major cost component for transport companies.

KBES has a comparatively low Fundamental score of 0.95 out of 3 and a Valuation score of 1.2 out of 3.

Gearing stood at 7.2% as at end-September 2014. No dividend was declared for the past four years. The stock is trading at 0.61 times book value of 45 sen. 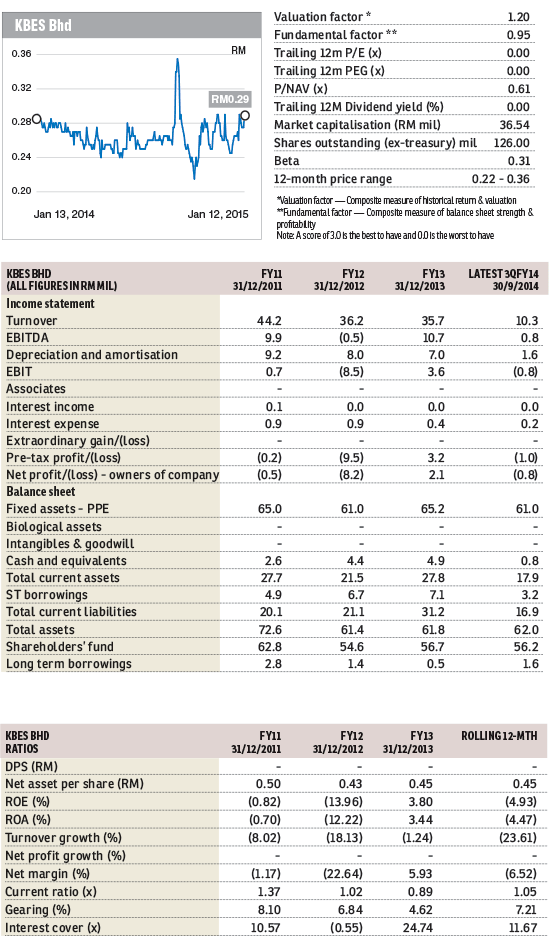