Kaf-Seagroatt & Campbell Bhd
KAF-Seagroatt is a well-established stockbroking company, and also one of the few standalone ones left in the country.

Its shares appear attractively priced with a price-to-book of 0.93 times, with a strong balance sheet that boasted net cash of RM147.2 million as at Aug 31, 2014. This is equivalent to a substantial RM1.23 per share, or 65% of its market capitalisation.

The company is well-known for its prudent management under the founding husband and wife team of Datuk Ahmad bin Kadis and Datuk Khatijah bte Ahmad, who are now in their early 70s, and who hold a collective 73.41% stake in the company. In their personal capacity, the couple also hold other financial services companies under the wider unlisted KAF group, including KAF Investment Bank.

With its shares tightly held, KAF-Seagroatt’s stock is fairly illiquid. Nonetheless, its low valuation and large cash rich holding could make it a potential future candidate for merger and acquisition (M&A) activities.

The stock is trading at a trailing 12-month P/E ratio of 19.1 times. The company pays dividends consistently. For FY2014, dividend per share was 7.5 sen, translating into a decent yield of 4.0%. 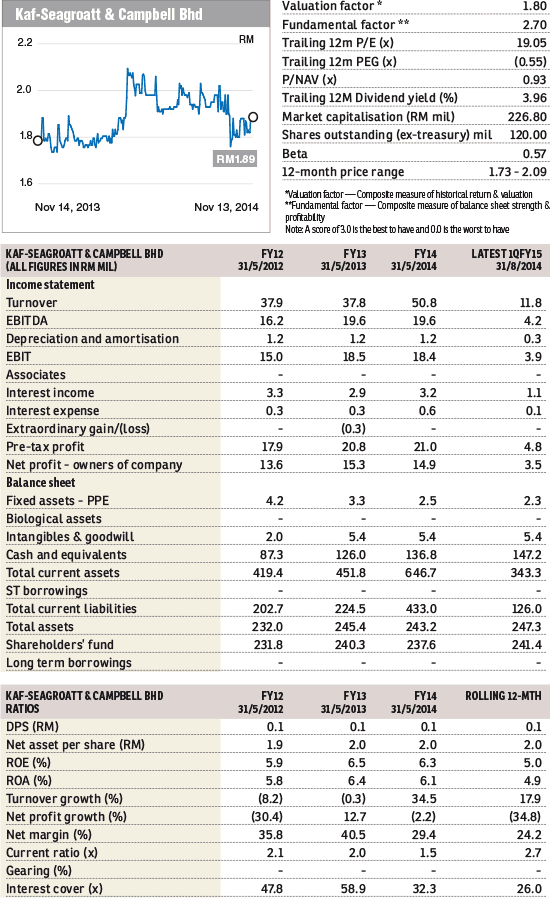