In December 2012, the company unveiled a plan to sell its NFO business to a newly set up trust company, which was to be listed on the Singapore Exchange. The exercise would have crystallised value for the NFO business – valued at RM6 billion – and shareholders of BJToto would have received a one-off bumper dividend, about 45 sen per share, to be distributed from the proceeds.

The plan was, however, aborted a year later due, in part, to poor market response to the proposed initial public offering of the trust company. Since then, BJToto share prices have been drifting lower.

Now that regulation changes have been made to allow business trust listings on the Bursa Malaysia, it would be interesting to see if BJToto is still keen on pursuing this path. If so, it could attract renewed investor interest.

The NFO business – whilst generating steady cashflow stream – is unexciting. Growth prospects are limited due to tight regulations on licenses. Its customer base is also unlikely to expand by much.

The stock appeals mainly for its steady dividends and higher than market average yields. Dividends for FYApr2014 amounted to 17 sen per share before taking into account a share distribution valued at 9.5 sen per share. In total, this translated into a net yield of 7.3% at the current price of RM3.61. For the latest 1QFY15, BJToto declared a dividend of 5.5 sen per share, about 92% of net profit. 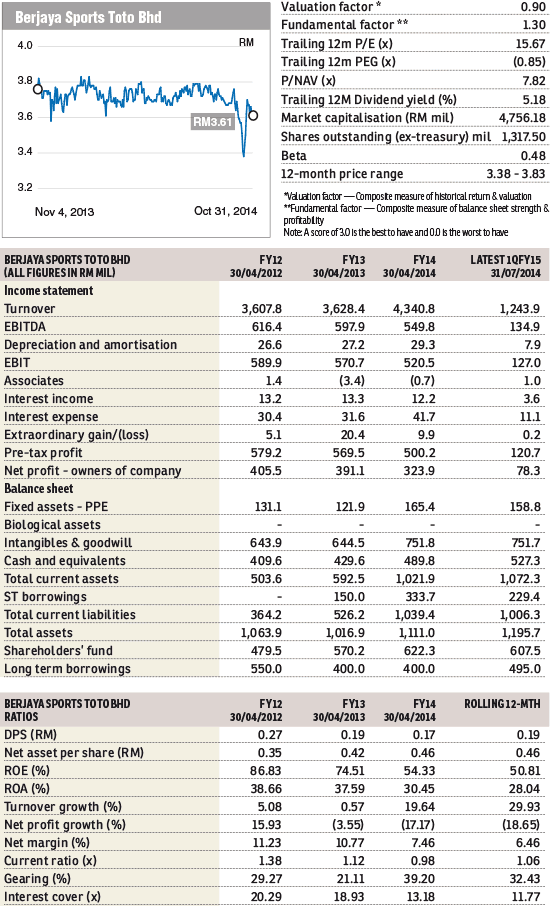