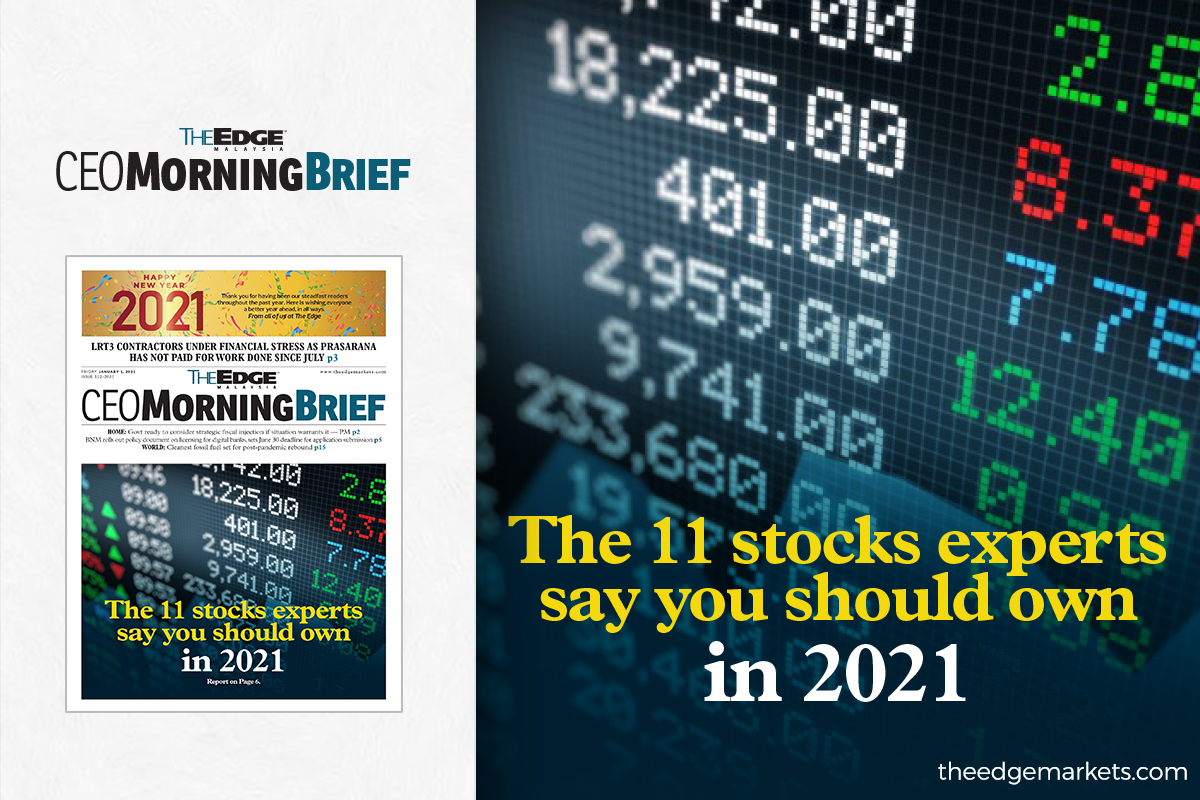 The world went into real uncharted territories in 2020, starting with a pandemic no one had foreseen, and one the world had not experienced in decades. And while the subsequent slump in the equity markets was expected, the wild surge upwards as bulls dominated — including in Bursa Malaysia — was rather not, especially with the yet-to-dissipate shadows cast by the coronavirus.

Moving forward, the availability of vaccines raises optimism of a better year ahead.

The Edge contacted fund managers and analysts to tap their expertise in picking the stocks for 2021. Below is the list of stocks they highlighted: IHH Healthcare Bhd, which has operations in various parts of Asia, has been touted as a proxy for regional recovery from the Covid-19 pandemic.

The healthcare group has suffered from low patient volume as many postponed non-urgent treatment and visits to healthcare facilities due to the pandemic. Furthermore, the closure of borders has deterred the arrival of foreign patients.

Nonetheless, there could be an opposite scenario before IHH in 2021 once the spread of Covid-19 has been curbed globally.

Maybank Investment Bank Research (Maybank IB) believes that the group’s earnings would improve as foreign medical patients return upon the reopening of borders.

In its 2021 Outlook, MIDF Research opined that private healthcare service providers such as IHH will continue to improve financially in 2021 amid expectation of the return of patients undertaking postponed procedures and treatments, as well as the Covid-19 vaccine, which would assist in containing the spread of the deadly virus.

IHH’s share price, which tumbled to a low of RM4.68 in March, has regained its footing since then. It is now trading at RM5.70-level where it was in late December 2019. The casino operator is in the sweet spot to benefit from growing domestic tourism as borders are closed; Malaysians cannot travel abroad. Should the international borders be re-opened in 2021, Genting Malaysia Bhd (GENM) will also benefit from the arrival of foreign tourists.

2020 was a bad year for GENM as it had to unprecedentedly shut down all its casinos globally.

CGS-CIMB Research believes that the current share price has not factored in an imminent full recovery as patron volume increases post-Covid-19, although the stock has rebounded 40% since early November.

The research firm expects a full return of visitors by 2H21, partly bolstered by Genting SkyWorlds’ opening in mid-2021.

For the financial year ending Dec 31, 2021 (FY21), CGS-CIMB Research is projecting GENM's core net profit to recover to RM563 million and to double on a year-on-year basis in FY22 to RM1.16 billion.

In contrast, the research firm is expecting GENM to post a net loss of RM1.3 billion in FY20, mainly due to the unprecedented disruptions resulting in a three-month closure of the casino, amid the Covid-19 outbreak. The utility giant was the second worst performing FBM KLCI component stock in 2020 after Genting Bhd. Its share price drifted lower even after the global rout in March while others rebounded from the troughs.

Tenaga Nasional Bhd seems to be a screaming buy. According to Bloomberg, there are 20 analysts who have "buy" calls while two have "hold" calls. The average target price is RM13.08 with the highest at RM14.27 and the lowest at RM11.10.

Electricity sales are expected to recover as economic activities pick up post-Covid-19 which will augur well for Tenaga.

The consensus estimates for its forward price-to-earnings ratio (PER) based on earnings for the financial year ended Dec 31, 2021 (FY21) earnings stand at 13.73 times, which is more attractive vis-a-vis its five-year average PER of 14.14 times.

AmInvestment Bank Research expects a dividend yield of 4.2% in 2021, while Maybank IB is forecasting a yield of 5.3% in FY21. Tenaga is the top pick of Maybank IB and AmInvest Research. If you still believe in the great earnings growth story in the rubber glove industry despite the availability of the Covid-19 vaccine, Hartalega Holdings Bhd could be a choice to buy on strength given that the stock has sagged almost 43% from its peak of RM21.16, according to Maybank IB.

Hartalega, the world’s largest nitrile glove maker, is one of Maybank IB’s top picks. It is projecting 580% growth on earnings per share in FY21 and 100% in FY22.

Hartalega stands out among the glove stocks, according to Maybank IB, due to lower oversupply risk in the nitrile space considering the limited supply of raw material, namely nitrile-butadiene rubber (NBR).

The anticipated continued robust growth has in turn made Hartalega appealing in terms of PER. Maybank IB noted that Hartalega's PER valuation is undemanding at nine times in 2021 and 12 times in 2022.

Furthermore, investment analysts believe that Hartalega may have room to raise its average selling prices to catch up with others in the industry that have already upped their selling prices substantially.

Any rebound might not be across the board in the coming year as the glove mania seems to be cooling off in the fourth quarter of 2020. Hence, stock selection is important moving forward. British American Tobacco (Malaysia) Bhd’s (BAT) share price staged a strong rebound in the final two months of 2020, recouping most of the lost ground as it hit a 20-year low of RM8.80 in March.

Still, its current share price remains fairly undervalued compared with its historical price. The tobacco manufacturer was trading at RM40 three years back, constituting a 65% decline.

Valuation-wise, BAT is trading at a trailing 12-month PER (TTM PER) of 14.99 times, cheaper when compared with its five-year average PER of 18.58 times, based on Bloomberg data.

CGS-CIMB Research, which has a "buy" call with the highest target price of RM17.48, expects BAT’s long-term growth could come after it enters the burgeoning vape market.

“We think its earnings visibility looks clearer for the first time in years,” said CGS-CIMB Research.

The anticipation of more effective enforcement on illicit cigarettes would be another re-rating catalyst for the stock. Any effective clampdown on cigarette transshipments in 2021 will give a boost to BAT’s earnings, which had been eroded by the rampant contraband products.

Besides, BAT, which declares regular dividend, is currently offering an indicated dividend yield of 6.36% — which is deemed attractive. Unless there is another round of Movement Control Order that requires the shutdown of non-essential businesses, including number forecast operators (NFOs), to contain the Covid-19 pandemic, Magnum Bhd is expected to be well on the earnings recovery path.

RHB Investment Bank highlighted Magnum's dividend yield of 7.3% in 2021 to 2022, which is attractive for long-term yield-seeking investors.

"This counter is our preferred pick as a pure-play NFO that is expected to benefit from the ongoing efforts to police illegal gambling. We like the stock because the NFO business has proven to be resilient — even during a weak economic environment," said RHB IB.

Ticket sales recovery has shown significant improvement since reopening in June and is hovering around 85% to 90% of pre-pandemic levels, the research firm noted.

Furthermore, earnings upside could come from potential monetisation of its stake in U-Mobile, said RHB IB.

RHB IB has a "buy" call with the highest target price of RM2.73, which implies a headroom of 20% from its last closing price of RM2.28. Gamuda Bhd and Sunway Construction Group Bhd (SunCon) are perceived to be among the key beneficiaries of public mega infrastructure projects such as the East Coast Rail Link (ECRL) and High-Speed Rail (HSR) line.

Areca Capital chief executive officer Danny Wong opined that the construction sector, particularly when it comes to public infrastructure, is set to be better as more infrastructure projects are expected to be awarded.

"As such, companies that are involved in infrastructure construction should be able to get more contracts," he told The Edge.

Not to mention, MIDF noted Gamuda and SunCon have ventured into foreign markets, as evidenced by SunCon's RM823 million contract win in India for two highways, and Gamuda's high likelihood of clinching a A$2.6 billion project in Sydney for twin 4km tunnels, known as the "M6 Stage 1 Motorway Project". For the airport operator, 2020 was an annus horribilis, with the company booted from the FBM KLCI as international air travel was brought to its knees as a result of the Covid-19 pandemic.

"Although we do not expect full recovery to pre-Covid 19 level [so soon], the initial rebound from the low point can be substantial," Choo told The Edge.

The impending roll-out of Covid-19 vaccines globally in 2021 brings a ray of hope for the reopening of international borders worldwide although the number of infections is still on the rise.

Another rerating catalyst is the potential improvement in the terms of the Operating Agreement that it is expected to sign with the Malaysian government, according to analysts. For My EG Services Bhd (MyEG), investors may have to ignore the noises and focus on contracts that it has in hand, which will be a reflection of its earnings potential.

Despite the evolving political landscape, many of MyEG's e-government contracts have been renewed. Not just that, the company has also been given new contracts, for instance to operate the MySafeTravel for the Ministry of Health, which is a digital health pass system for incoming travellers from abroad.

It also runs a portal to help companies arrange for the subsidised Covid-19 tests for staff, both local and foreign. The company has carried out roughly 200,00 Covid-19 test screenings since the service was launched at end-June 2020 until October 2020.

It also offers new services for the Road Transport Department, such as online renewal of motorcycle insurance, road tax and driver's licence.

MyEG also made headlines for acquiring a 10% stake in S5 Holdings Inc, which was a contender for the RM1.8 billion National Integrated Immigration System contract. Subsequently, shareholders of S5 decided to seek a backdoor listing through Ancom Logistics Bhd.

MyEG is seen to be a victim of the changing political landscape. That said, given that its existing contracts with government agencies have been renewed, and new jobs granted, the company could be a counter to look out for in 2021. Year 2021 could be a volatile year, Mega First Corp Bhd's steady and resilient earnings from the 260MW Don Sahong hydropower project could be a shelter.

It is noteworthy that besides resilient earnings, Mega First is also a company to look out for renewable energy theme play as policymakers globally are stepping up efforts to meet ambitious climate targets.

The forecast big leap in earnings is due to the hydropower project, which is expected to generate annual net profit attributable to shareholders of between US$60 million and US$70 million during its 25-year concession period starting from FY20.

According to Bloomberg data, with a consensus target price of RM8.31, this implies a 20% upside from its closing of RM6.90. All three research houses covering this counter have "buy" calls.

Another alternative for renewable energy play could be KPower Bhd, which is one of the top picks of RHB IB and AmInvestment Bank Bhd.

RHB IB said KPower is firmly on its growth trajectory and is expected to double its order book size by end-FY21. "The stock, in our view, could undergo a further rerating, if KPower can penetrate the solar industry, which generally fetches premium valuations," said the research firm.