ASIA Poly (Fundamental: 0.55/3, Valuation: 0.5/3) was most recently featured in Stocks with Momentum on April 21, when its share price was 41.5 sen. Yesterday, it was again picked out by our algorithm with 2.4 million shares changing hands. The stock closed at 52.5 sen.

To recap, Asia Poly is one of the largest domestic suppliers of A-Cast branded cast acrylic sheets.

Notably, Dato’ Yeo Boon Leong emerged as the single largest shareholder with a 28.22% stake after the Lim family disposed their holdings in mid-April. Dato’ Yeo has also been appointed the Non-Executive Chairman of the company following the resignation of its Chairman last week.

The company has also received an extension of 18 months to comply with the Bumiputera Equity Condition, subject to Asia Poly’s submission of a compliance proposal before October 22, 2015. The composition of Bumiputera shareholders was approximately 0.63% as at 12 December 2014. 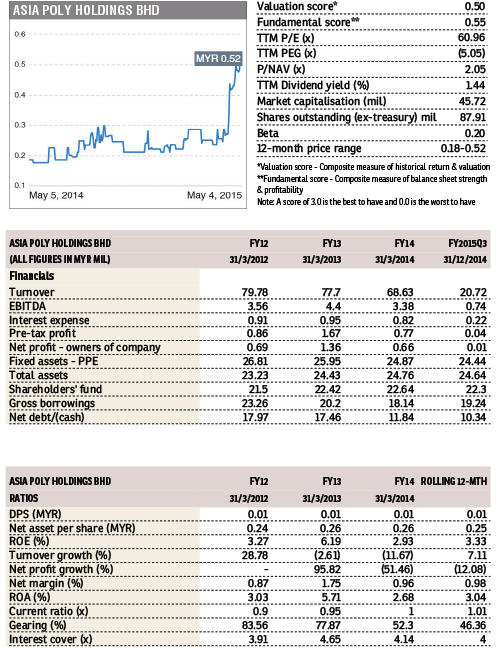