The State of the Nation: Trade surplus at risk as commodity prices fall

THE 3.1% contraction in Malaysia’s exports last October, the first decline in 16 months, reflects the nation’s dependence on resource-based export, with data showing the export value of major items in that segment fell during the month.

Commodities had a rough year in 2014. While palm oil prices were lacklustre, global crude oil prices spiralled downward — after hitting a peak of US$115.06 per barrel in June — due to factors ranging from oversupply to geopolitical issues.

The negative price trend has raised the risk of Malaysia’s dependence on resource-based export.

In October 2014, the country’s trade surplus tumbled to RM1.2 billion, from RM9.3 billion a month earlier, sparking concerns of a possible trade deficit going forward. The situation was made worse by robust imports, spurred by domestic infrastructure development needs.

“We are still quite dependent on resource-based exports but there has been ongoing efforts by the government to further diversify the portfolio, to go downstream,” says CIMB Research economist Julia Goh.

Over the last decade, growth in the country’s commodities or resource-based industries has contributed to the expansion of the downstream manufacturing sector. This was in line with the country’s aim to diversify from a predominantly commodity export-driven portfolio to developing its non-E&E manufactured products export portfolio, which gives better value add.

The Economic Report 2014/2015 says the top two largest non-E&E manufactured exports in 2013 were petroleum products and chemicals and chemical-based products.

In its 2013 annual report, Bank Negara Malaysia said rising commodity prices in that year led to higher prices of most products in the resource-based industries. This then created further impetus for the growth of the local manufacturing sector, especially the non-E&E manufacturing segment where the export value had also surged.

However, as commodity prices fell in 2014, the non-E&E manufactured segment was also affected.

It is noteworthy that Malaysia has made little progress in developing its non-E&E manufactured segment, apart from products derived from commodities such as oil and gas and palm oil.

Meanwhile, the E&E sector, which contributes to a third of the country’s exports, has not moved up the value chain significantly over the years. The latest economic report says E&E manufactured exports are dominated by semiconductor devices, which accounted for about 50% of the total E&E exports for the first seven months of 2014.

“They [E&E] have been moving up the value chain but not in a significant way. But E&E products still contribute the bulk of the export revenue,” says RHB Research chief Asean economist Peck Boon Soon.

CIMB’s Goh concurs, saying that the manufacturers in the E&E segment are trying to move up the value chain, but it is a gradual process to get there. She adds that the country has done better than Thailand in recent years, but could be losing out to countries such as Indonesia and Vietnam where labour cost is cheaper.

“Malaysia is probably losing out to these countries on investments from multinational corporations that are looking at economies of scale, but mid-to-small companies which are less risk averse will continue to look at Malaysia as an investment destination,” she adds.

Moving into 2015, Peck does not expect strong growth in the country’s exports. He forecasts a 3% to 5% growth, in nominal terms, for this year compared with 6% last year.

“The growth in imports will likely trail that of exports. Falling commodity prices, in particular oil and LNG (liquefied natural gas) prices, will likely translate into lower export earnings in nominal terms in 2015.

“While Malaysia stands to lose oil and LNG export revenues, the impact will likely be offset by cheaper crude oil import bills, which would result in a narrower oil and gas trade surplus rather than a dip into an oil and gas trade deficit,” he highlights in his report. 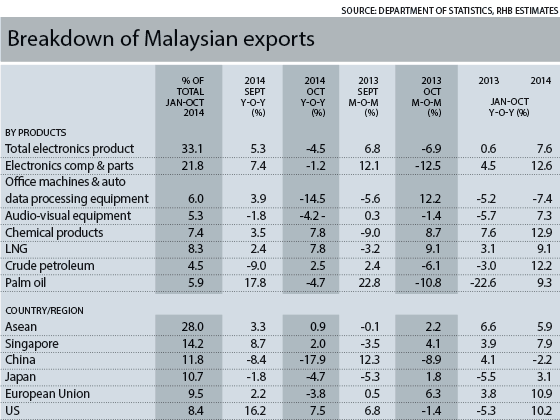