The State of the Nation: Rethinking urban transport and cost of high car ownership 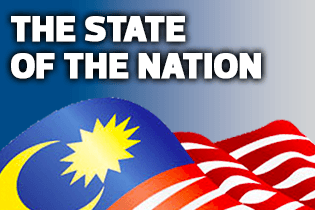 MALAYSIANS drive practically everywhere because there is not much of a choice; public transport is largely deemed unattractive due to the lack of first and last mile connectivity, such as park and ride space, bicycle and pedestrian access and feeder buses.

It is no surprise, then, that private vehicle ownership in Malaysia, a developing nation, is among the highest in the world. Not only has car ownership nearly doubled since 2000 but the number of registered cars rose 40% between 2005 and 2010 when total population grew only about 10% to 28.3 million.

In fact, the World Bank estimates that there are two cars to one resident in the federal territory of Kuala Lumpur. And even among the poorest 10% of households, about half owned a car as at 2012, according to the World Bank’s latest Malaysia Economic Monitor report released on June 16.

“These trends are partially due to low-density urban development and the National Automotive Policy. Although a high level of car ownership is not necessarily undesirable, in Malaysia, it is linked to significant congestion,” World Bank economists Matthew A Verghis and Frederico Gil Sander write in the report.

“International experience has shown that car ownership and car use can be decoupled — but this has yet to be attained in Malaysia. Most Malaysian car owners use their vehicles on a daily or regular basis. Between 1997 and 2012, the number of vehicle-kilometres driven in Malaysia grew at an average rate of 7% per year, faster than the 6.7% growth in vehicle registration over the same period,” they add.

While it is good that even the lower-income group can afford cars, some observers reckon that an effective public transport system will not only help alleviate congestion but also increase the disposable income — and, hopefully, discretionary and retirement savings — of the low wage earners.

This is because even buying one of the most affordable cars in Malaysia — the basic Perodua Axia 1.0 manual with a RM24,437 price tag — could potentially set back a low wage earner by up to RM31,752 on the vehicle if he chooses the maximum nine-year loan. The RM294 monthly repayment is one-third of the RM900 minimum monthly wage in Peninsular Malaysia. This is sizeable, considering that some 88% of the country’s young wage earners earn less than RM1,500 a month.

Moreover, if one is thinking in terms of having at least RM800 a month to spend post-retirement, the RM31,752 spent on the car over nine years could have potentially lengthened the retirement kitty by 39 months or 3.3 years. This is not including the interest that could have been earned.

Similarly, those who choose the standard Perodua Myvi 1.3 manual at RM40,862 will end up paying RM52,704 or RM11,842 in interest if he chooses a nine-year maximum loan with a RM488 monthly repayment. The more popular Honda City and Toyota Vios 1.5 would cost about RM74,000 on the road.

On a broader perspective, the World Bank economists estimate that the traffic congestion that commuters in Greater Kuala Lumpur go through as they crawl at 29kph during the morning peak hours translates into annual income losses of RM10.8 billion to RM19.6 billion for the city. That’s 1% to 1.8% of Malaysia’s gross domestic product from delay cost alone.

“Including the cost of fuel wasted and the economic cost of CO2 (carbon dioxide) and other emissions, the total cost of congestion in Greater Kuala Lumpur is estimated conservatively at 1.1% to 2.2% of GDP in 2014. These cost estimates — of at least RM3,300 per resident — do not account for the reduction in subjective well-being that is consistently associated with commuting,” the economists say.

Efforts are underway to boost the availability of urban transport as a viable choice for more people in Malaysia, as attested by the ongoing construction of the Klang Valley Mass Rapid Transit (MRT). The Eleventh Malaysia Plan (11MP) for 2016-2020, for instance, reinforces the importance of building an “integrated, need-based transport system” by enhancing connectivity across the various modes of transport and regions.

The 11MP also mentions plans to expand the transit-oriented development (TOD) concept in urban areas, which, if successful, could potentially enhance and leverage access to quality public transport while attracting private investments for commercial and residential use.

Citing figures from the Performance Management and Delivery Unit, the World Bank says the Klang Valley currently faces “a shortage of rail-based public transport coverage”, with less than 20km of rail per million people in 2010 compared with at least 40km of rail per million people in public transport-oriented cities such as Singapore and Hong Kong. In New Delhi, the figure is 92km while in London, it is 166km, the World Bank says.

This needs to be fixed for Malaysia to attain its goal of inclusive growth.

“Urban public transport generally under-serves urban low-income neighbourhoods, negatively affecting social and economic inclusion and pressuring households least able to afford private vehicles into purchasing them. The high cost of housing near the city centre and land use policies that favour sprawl have pushed many lower-income households to neighbourhoods with limited connectivity, especially from public transport. This makes it hard for lower-income households to get to jobs and access public services, representing a further obstacle to their social and economic inclusion.

“As a consequence, many have to either buy a small car or at least a motorcycle, which then adds pressure to their weak household finances. As a result, about half of households in the bottom decile of income distribution owned a car in 2012,” the World Bank economists say.

It is also imperative to ensure that the estimated RM93 billion earmarked for building MRT 1, 2 and 3 and light rail transit (LRT) extensions 1, 2 and 3 through to 2022 is not wasted because of a continued shortage of first and last mile connectivity to the trunk lines.

The economists reckon that to improve the delivery and management of urban transport across its cities, Malaysia should establish a lead transport agency in the metropolitan areas to oversee strategic and operational planning and infrastructure and service delivery and maintenance to ensure supply matches demand adequately.

“In Malaysia, no single government agency has the authority to plan and deliver solutions for urban mobility across all relevant dimensions (public and private transport) and levels of government and administrative and geographical boundaries. SPAD has been given jurisdiction over land public transport only, expressly excluding private (car-based) transport planning, which at the national level is under the jurisdiction of (primarily but not only) the Ministry of Works. This means that, in practice, urban roads and trunk highways are planned and delivered with limited coordination with transit planning despite the supply-demand interdependence between public and private transport modes,” they say.

The economists also recommend that Malaysia introduce measures that can effectively reduce the usage of private transport in heavily congested areas and implement sustainable financing options for public transport, including the use of fuel and other taxes.

Introducing local taxes on fuel would not only result in environmental gains and trim the fiscal deficit by RM10 billion to RM19 billion but it will also fund the cost of public transport, they add, pointing out that 24% of Vancouver’s transit system is funded by municipal gas taxes. Another option would be to have impediments to TOD but this, they say, “should be considered alongside implications for affordability and inclusion”.

“Central to realising the benefits of urbanisation is the efficient movement of people and goods. In Malaysia, increasing levels of road congestion in large and medium-sized cities alike; insufficient availability of public transit options as an alternative to car use for urban mobility needs; low levels of public satisfaction with available public transport service provision; and rapidly changing expansion of the urban fabric of cities, commonly referred to as the urban sprawl, hamper movement and threaten gains from urbanisation.

“While Malaysia is far from alone in facing this set of issues — most middle-income countries face them as well — Malaysia’s exceptionally high motorisation rate and relatively low supply of public transport makes this a particularly urgent challenge towards meeting the country’s three-pronged national goal of high income, sustainability and inclusiveness.” 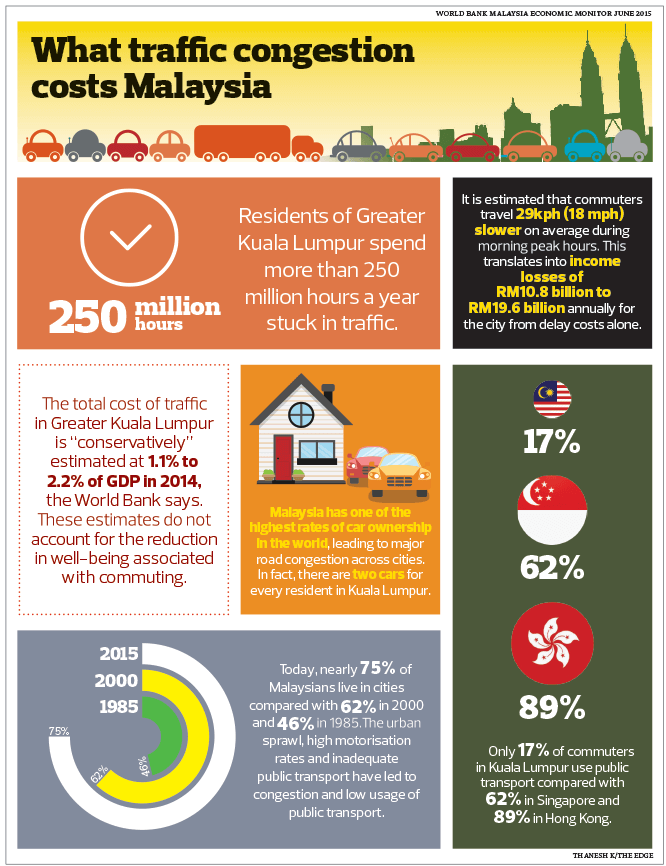