The State of the Nation: Malaysia needs more bang for each buck

Economists who see the current lower crude oil era as a window to erase Malaysia’s escalating subsidy bill, welcome Najib’s announcement that came after critics questioned the viability of a tiered subsidy scheme, which had been announced just five days before. Finance Minister II Datuk Seri Ahmad Husni Hanadzlah said on Oct 27 that Malaysians earning below RM5,000 a month will still enjoy fully subsidised petrol and diesel while those earning between RM5,000 and RM10,000 a month will receive 50% aid — a plan that experts say would be hard to execute and leave “a large majority of Malaysians” eligible for subsidised petrol.

Chua Hak Bin, Bank of America Merrill Lynch’s head of emerging Asia economics, for one, is in favour of a straightforward fuel price hike, which he thinks “is probably more effective in cutting fuel subsidies and curbing fuel consumption”.

“Part of the fiscal savings can then be transferred to lower income households, via, for example, EPF top-ups. This is less bureaucratic and does not require a complicated and expensive card system,” he says.

While well over half of Malaysians probably earn less than RM5,000 a month, RHB Investment Research executive chairman Lim Chee Sing, however, points out that the head of Malaysia’s Economic Planning Unit, Datuk Seri Abdul Wahid Omar, had previously mentioned a different multi-tiered subsidy mechanism that, if implemented, could save the government RM5 billion in fuel subsidies a year.

That, Lim says, suggests that there are savings to be had from a tiered system. It also implies that fuel smuggling and subsidies enjoyed by high-income earners cost the government at least RM5 billion a year.

Savings of RM5 billion could have helped to double, or pay for, the RM4.9 billion that BR1M payments to the lower income group is expected to cost in 2015. It is also enough to pay 2½ months of Malaysia’s debt servicing cost of RM24.4 billion for next year. The money could also help the government cancel scheduled toll hikes, being 10 times the RM458.7 million that toll compensation to highway concessionaires is expected to cost next year. It is understood that the amount could also be sufficient to pay all civil servants a one-month bonus.

Whatever the case, Najib himself stressed the need for fiscal discipline. Malaysia’s tight finances also means there is a greater need to ensure allocation of funds is efficient, economists say. Already, the experts think Malaysia is cheating itself of its growth potential because of how little money has been spent on development expenditure versus operating expenditure, which has accounted for more than 95% of government revenues since 2008.

“Too little allocation for development expenditure has been a major drawback on government finances for many years… This [coupled with the need to now contain the budget deficit at a manageable level] has posed a major constraint on the ability of the government to exploit new sources of growth for the Malaysian economy since the Asian financial meltdown,” RHB’s Lim says.

A closer look at the breakdown of allocations to Malaysia’s 24 ministries in the Ministry of Finance’s statement of federal expenditure estimates for 2015, for instance, suggests there could be potential savings from minimising duplications.

“Every 10% fall in oil prices would result in more than a RM5 billion drop in government oil revenue, or about 0.5% of GDP, a year. Ceteris paribus, this means that the government would be hard pressed to achieve its fiscal deficit of 3.5% of GDP this year and 3% of GDP next year unless it can cut expenditure elsewhere, or raise other revenue, or a combination of both in order to achieve the fiscal deficit targets,” Lim says.

“Nevertheless, this does not necessarily mean that the fiscal deficit targets cannot be achieved.  It is just that revenue would have to be higher, which could come from taxes [there is under-estimation of revenue in the last few budgets] or by selling some assets,” Lim adds.

As Malaysians will bear additional cost from the implementation of the Goods and Services Tax from April 1 next year, observers reckon that more citizens will likely be paying closer attention to how the government is spending its money.

“People are less likely to ask questions when money is available in abundance. The rising cost of living, subsidy cuts and new taxes mean there is less money in the pocket… Going by how 1MDB is being hotly debated in Parliament and in the papers, inefficiencies in spending are less likely to be ignored, let alone forgiven,” an observer says. 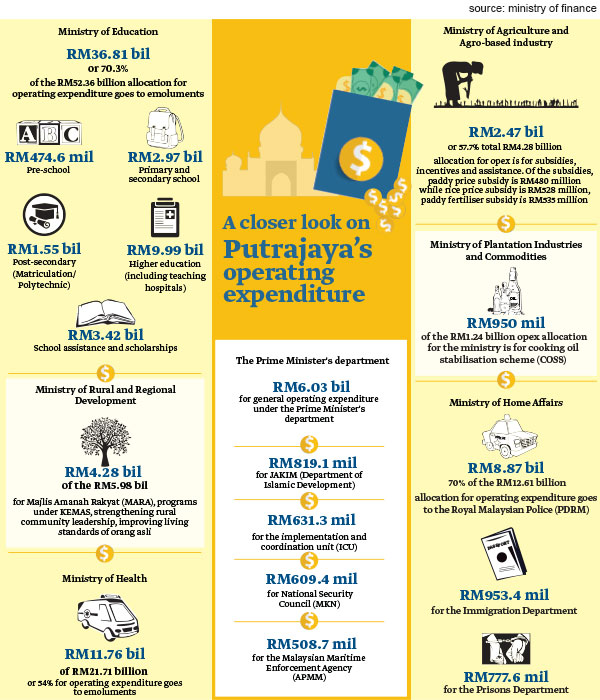