The State of the Nation: Loan growth seen weakening this year 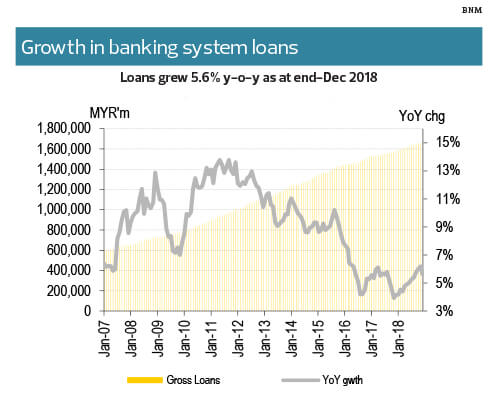 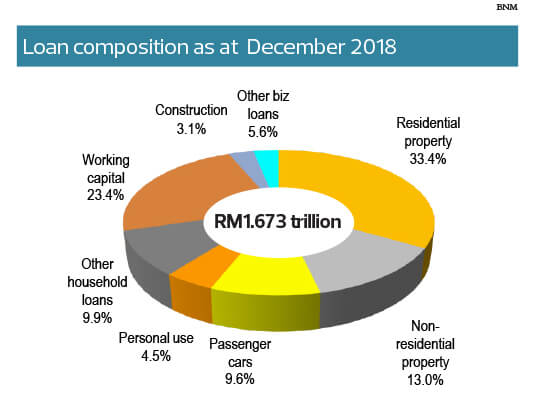 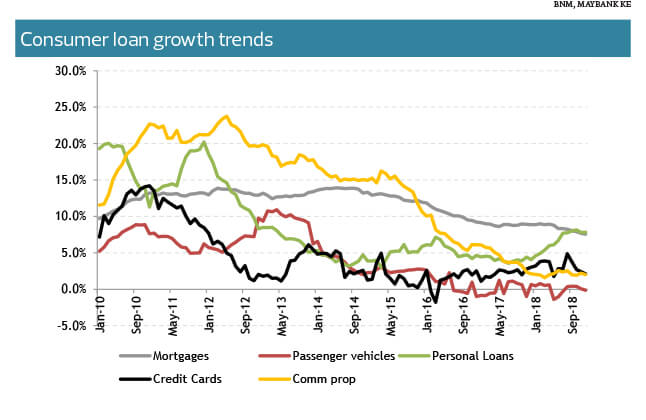 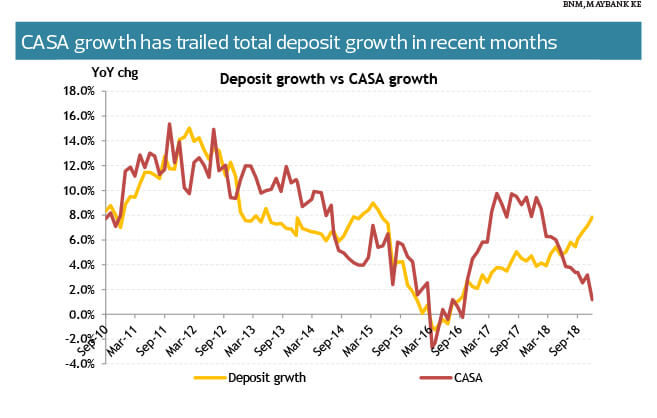 GIVEN a host of challenges at home and abroad, banking sector loans are expected to grow at a slower pace of about 5% this year after expanding 5.6% last year, their fastest pace in three years.

Bank Negara Malaysia’s latest monthly statistics show that outstanding loans in the banking system stood at RM1.67 trillion as at Dec 31, 2018, a 5.6% increase over 2017.

However, analysts are unanimous in their view that the pace of overall loan growth will moderate this year, a poll by The Edge found. The seven banking analysts polled had growth projection ranging from 4.7% to 5.1%.

The projections come amid divided views on whether the pace of economic growth will be slightly faster, slower, or on a par with last year’s.

The government’s forecast gross domestic product growth of 4.9% for the year is only marginally higher than the estimated 4.8% expansion last year, but markedly below the 5.9% recorded in 2017.

“We see headwinds for banks’ loan growth in 2019, arising from slower economic growth and US-China trade tensions. As such, we are projecting slower loan growth of about 5% for 2019,” says CIMB Research.

“We expect measured loan growth in 2019 of 5%, given slower growth in loan applications and approvals through 2018 (+2% and 5% respectively) compared to the previous year (+5% and +10%). Retail loans, notably residential mortgages which are still growing at around 8%, albeit moderating, will nevertheless still support the industry,” says AllianceDBS Research.

Meanwhile, analysts expect the industry’s asset quality to remain stable, but are nevertheless keeping a close eye on banks’ loan exposure to the oil and gas, commercial properties and construction sectors.

The asset quality indicator appears to be defying the odds for now, says CIMB Research. “However, we expect the GIL ratio to rise to 1.8% at end-2019, in light of the slower economic growth and headwinds from the US-China trade tensions,” it says in a Feb 1 report on the sector.

“What we would monitor would be asset quality in housing and commercial property whereby in absolute terms, housing GILs rose 10% year on year at end-2018 while non-residential property GIL rose 23% y-o-y,” says Maybank Investment Bank Research.

All eyes on mortgages

All eyes will be monitoring mortgage growth trends closely, given that the segment makes up the biggest portion of banking sector loans.

Of the RM1.67 trillion outstanding loans as at end-December, mortgages accounted for 33.4% followed by working capital (23.4%) and non-residential property (13%).

Meanwhile, growth in working capital loans — the main segment within business lending — stood at a higher 5.5% last year compared with just 0.9% in 2017. However, weaker applications for working loans point to slower growth this year. On a three-month moving average basis, working capital loan applications contracted by 18.5% y-o-y in December 2018, the fifth consecutive month of contraction.

On the same basis, mortgage applications were flat at 0.6% y-o-y in December, having contracted 2.3% in November. Approvals, however, rose 4.2% y-o-y compared with 3.6% in November. The average approval rate was stable at 46%.

An interesting point to note from the latest Bank Negara banking statistics is that growth in CASA (current account and savings account) has trailed that of overall deposits.

Some analysts say they would not be surprised if more banks raised their base rate, a move that would make loans more expensive for borrowers.

“That total deposit growth of 7.8% y-o-y is outpacing loan growth of 5.6% y-o-y points to ample liquidity in the banking system. However, CASA growth has trailed overall deposit growth for the 7th consecutive month, slipping to just 1.2% as at end-2018 [compared with 8% for overall deposits]. This is of some concern, in our view, for it points to fiercer competition in the deposit space,” says Maybank Investment Bank Research, in a Feb 4 report on the sector.

“With CIMB Bank, Hong Leong Bank and Bank Islam having raised their base rates by 10 to 13 basis points, we would not be surprised if more banks opt to raise their base rates as funding costs rise,” it adds.

Fixed deposits (including tawarruq fixed deposits) grew by a stronger 9.8% last year compared with 6.3% in 2017, mainly because of aggressive promotions.

This was due to a number of reasons, which includes some banks wanting to shore up deposits to raise their net stable funding ratio (NSFR) level — a key liquidity measure that prioritises long-term stable funding — ahead of an expected 2019 adoption deadline. In November last year, though, Bank Negara said it was extending the NSFR observation period for another year to 2020.

The average lending rate in December was 5.42%, the same as the previous month.

Most analysts are maintaining a “neutral” investment stance on the sector.

“Given concerns over the possible deterioration in loan growth and asset quality in 2019, we continue to rate banks a ‘neutral’. On a positive note, the sector’s dividend yield is attractive at a projected 4% for 2019. RHB Bank remains our top pick for the sector,” says CIMB Research.

AllianceDBS Research believes that this year, the earnings growth of small banks could outpace that of their larger peers as a result of the inroads they have made into targeted sectors — SMEs, personal financing and credit cards — and their relatively smaller asset base.

“We have pivoted towards the smaller banks for our top picks, mainly AMMB Holdings and BIMB Holdings. This is premised on expectations that they would outpace the industry in terms of earnings growth, and affordable valuations. For the larger capital banks, we like RHB Bank for its unjustifiably low valuations against an improving earnings profile, as well as Hong Leong Bank for its steady earnings delivery and robust asset quality,” says Alliance DBS in its Feb 4 report.

Catalysts for the sector would be a recovery in non-interest income arising from potentially stronger capital markets and better corporate loans demand as macro uncertainties clear up, it adds.