The State Of The Nation: The highs and lows in Bank Negara’s 2017 annual report 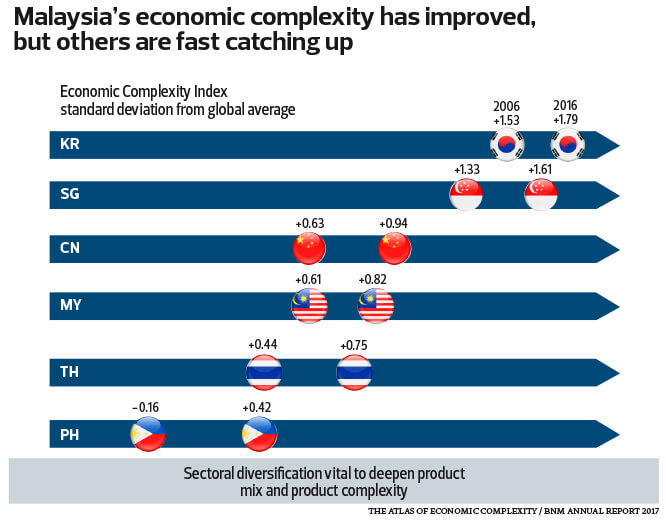 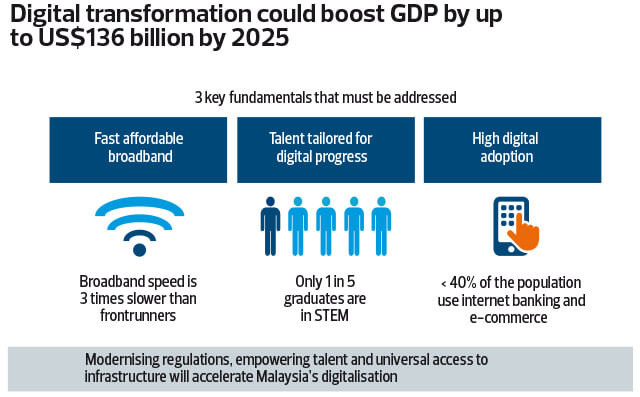 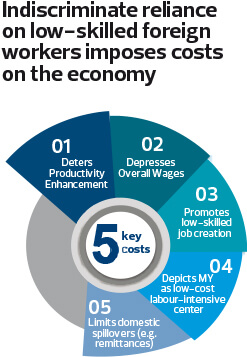 THERE is a chance the economy will grow as much as 6% this year, according to Bank Negara Malaysia’s 2017 annual report, which was released on March 28. Not only is that ahead of 2017’s stronger-than-expected 5.9% gross domestic product growth, the central bank’s baseline projection of 5.5% growth for this year is at the higher end of the official 5% to 5.5% projected in the Economic Report 2017/2018, which was released just five months ago.

What has changed since last October?

Brent crude oil prices climbed some 16% from about US$60 in late October last year to nearly US$70 at the time of writing. Bank Negara assumes Brent crude oil prices at US$63 a barrel in making its projections, close to the International Monetary Fund’s projected average of US$60 for this year.

The ringgit has strengthened about 9% from 4.242 (Oct 27) against the greenback to 3.8647 (March 28), a boost for consumer spending as well as corporates and institutions looking to invest abroad. At the time of writing, the ringgit is the best performing Asian currency in the past one year and the second best performer after the yen so far this year, as it regains ground lost during the 2014 oil price freefall.

A stronger ringgit — which mitigates import costs and reduces the need for cost pass-through to retail consumers — contributed to Bank Negara’s lower inflation forecast of 2% to 3% for 2018.

Not only is the forecast below the Ministry of Finance’s 2.5% to 3.5%, the higher end of the central bank’s projection (3%) is also below 2017’s 3.7% inflation and the prevailing 3.25% Overnight Policy Rate — indicating positive real interest rates.

“The inflation outlook, however, depends on the trajectory of global oil prices, which remains highly uncertain,” the report reads. In any case, Bank Negara said a stronger ringgit exchange rate in 2018 “could result in a smaller contribution of domestic fuel prices to domestic headline inflation”.

The current account (CA) balance — the surplus that keeps the country from having a twin deficit situation, which could trigger a sovereign debt rating downgrade — has also been revised upward to RM38.9 billion (2% to 3% of gross national income) compared with the RM32.9 billion (2.3% of GNI) projected last October. The headline fiscal or budget deficit figure, meanwhile, remains at 2.8% of GDP for 2018.

Exports are projected to grow 8.4% this year to RM1.014 trillion — below last year’s 18.9% but above 2016’s 1.2% and the average of 2.5% between 2012 and 2016 — helped by sustained demand from key trading partners, continued expansion in the global tech cycle and increased domestic production capacity.

While the strength of the country’s exports could be impacted by unfavourable effects from rising trade protectionism, any over-tightening of global monetary accommodation (interest rates) and a sharp correction or increased volatility (which was surprisingly absent in 2017) in the global financial markets, the central bank says Malaysia is “well-positioned to withstand these headwinds, should [they] materialise”.

In the meantime, “the positive economic environment will provide policymakers with ample policy space to continue with the necessary reforms”, Bank Negara said.

The lows: the low-wage, low-productivity trap and lag in technical skill set

Other countries are racing ahead and Bank Negara has numbers to prove it.

Malaysia needs to “further diversify its product mix and deepen its product complexity” to maximise its potential in the highly dynamic global environment that is being transformed by technological disruption, rapid urbanisation and climate change. Economic complexity is characterised by the prevalence of skills and knowledge and reflected by the diversity and complexity of the products it makes and exports.

While the country’s so-called economic complexity has improved from +0.61 in 2006 to +0.82 in 2016, to make it the world’s 29th most complex economy, “most regional countries have accomplished greater complexity gains than Malaysia’s improvement of +0.21”.

The Philippines gained +0.58 in economic complexity, “moving from below the global average to above the global average within 10 years”, having successfully varied its export product mix, including having more complex chemicals, plastics and transport vehicles.

Malaysia’s complexity gains were slower as the export mix diversified to a smaller extent and the entry into new products “has yet to materialise significantly”. The more complex medical and scientific instruments base “remains fairly limited at 4% share of total exports” and Malaysia only managed to expand incrementally into more complex chemicals and plastics, as reflected by the small increase in export share from 8.2% in 2006 to 8.6% in 2016, Bank Negara said.

Policies to ensure a sustainable supply of well-educated and experienced talent need to be put in place as a more complex economy requires an adaptable workforce that can be easily reskilled and retooled. There should also be a pool with strong research skills to drive innovative change. Alternative financing platforms, such as crowdfunding, peer-to-peer lending and venture capital, are encouraged to support new growth areas that may entail higher risk.

Ongoing efforts to reduce red tape and reorientate incentives (taxes and subsidies) will encourage quality investments in more complex industries. Citing how the mining sector’s diversification into downstream petroleum products was incentivised by a 38% upstream petroleum income tax, Bank Negara said “similar strategies”, including a review of the corporate tax on crude palm oil firms’ upstream revenue, could be considered to spur the CPO industry to accelerate downstream expansion.

More importantly, economic complexity has a positive effect on income levels — which need to grow so all Malaysians can enjoy the benefits of economic growth (see sidebar).

As it is, wages are low: half of the workforce earns less than RM1,703 a month. The average starting salary of a diploma holder  of RM1,346 is only about RM350 above the minimum wage.

“There is evidence to show that Malaysia is weighed down by the low wage, low productivity trap. The contributing factor to this phenomenon is the prolonged reliance on foreign labour. While it may benefit individual firms in the short term, it has imposed a high macroeconomic cost to the economy. The availability of cheap, low-skilled foreign labour blunts the need for productivity improvements and automation. Employers keep wages low to maintain margins. Unfortunately, this depresses wages for local workers,” Bank Negara governor Tan Sri Muhammad Ibrahim said last Wednesday.

What is worse is that foreign workers repatriate a large share of their income, which takes away what could have been a boost to domestic consumption. In 2017, outward remittances stood at RM35.3 billion, the bulk of which were by foreign workers. An additional RM30 billion spent locally would have boosted private consumption by another 4% last year and 3.7% this year, back-of-the-envelope calculations show.

What began as a “stop-gap measure” for labour shortages in the 1990s, while firms transitioned to higher value-added activities, has become “an entrenched feature of the Malaysian economy”, the governor said. “While there has been progress in reining in [the use of] foreign workers, a failure to build on this may perpetuate Malaysia’s high reliance on the low-cost model that leans on the low-skilled foreign labour and is dependent on cost suppression as a source of competitive strength.”

That puts the country’s transition to a high-income economy and long-term competitiveness at risk.

Research already shows that 54% of jobs in Malaysia — of which 80% are mid-skilled — face a high risk of being automated in the next 10 to 20 years, and that the vast majority of jobs will require ICT skills within a  decade. Developing the requisite skills requires a strong foundation in technical studies, such as science and mathematics. That is a challenge as the country’s standard in technical studies lags behind most advanced economies. That universities in Malaysia will create substantially more graduates in Arts and Social Sciences and fewer in Science, Technology, Engineering and Mathematics (STEM) and technical fields — if left unaddressed — will perpetuate a skills mismatch as economic activities become more technologically and digitally advanced.

Digital adoption in Malaysia must also improve and see greater productive use. Although e-commerce and internet banking use is on the rise, these figures remain low at 23.2% and 37.6% respectively. “A majority of internet usage in Malaysia is confined to the consumption of content — such as downloading movies/music, social media and games — rather than productive activities such as the creation of new content,” Bank Negara said, noting how 81.2% of the country’s internet users download media and play games compared with only 9.1% on professional networking, 11.8% on content creation and 4.8% learning from formal online courses.

Malaysian businesses have also not fully capitalised on the potential of e-commerce, with only 28.4% of businesses having a website and 74.8% with fixed broadband connectivity — lagging behind South Korea’s 59.7% and 99.3% respectively in 2015.

Rather than being an “adopter” of digital technology on the World Bank’s Digital Adoption Index, Malaysia must aspire to be a “frontrunner”, which could potentially yield growth dividends of between US$100 billion and US$136 billion a year by 2025. The US, Japan, South Korea, Singapore and Estonia are among the “frontrunners” — all of whom are likely to have fast and affordable broadband, talent tailored for digital progress as well as high digital adoption among consumers and businesses.

“As a small, open economy, Malaysia’s competitiveness is no longer limited to its traditional physical factor endowments — land, capital and labour — but will be enhanced by its penchant for unlocking ideas and innovation in the digital economy. Malaysia will thrive on the opportunities that lie ahead with these digital frontiers,” the country’s digitisation portion of the report concludes.

The reverse, however, is also true. If policymakers do not seize the opportunity to make the necessary reforms to secure the country’s future during the good times, we risk being left behind as the world races ahead.