The State of the Nation: Has Japan started a global currency war?

UP TO September 2012, the yen was trading at around 77.5 to the US dollar (USD). It fell rapidly thereafter with the beginning of its quantitative easing (QE) policies after Shinzo Abe became the prime minister in December 2012. By the second quarter of 2013, the yen was hovering around 100 per USD and fluctuated just below 110 per USD up to Oct 30, 2014.

On Oct 31, 2014, Japan released its own “Halloween” surprise with a shocking new QE programme where the Bank of Japan undertook to increase its balance sheet by 15% of gross domestic product (GDP) per annum, or about US$735 billion a year.

Consequently, the yen fell from 109.21 to 112.32 on that day and is now hovering close to 115 to the USD. In other words, over a period of 25 months, the yen has lost 31% of its value in USD terms. The yen has also declined by a similar percentage against the euro over the same period. The significance on the global economy cannot be overstated as Japan is the third largest economy in the world. (See Charts 1 and 2)

And for those who think there is little further downside to the yen, please look at Chart 3. There was a time when the yen was trading at over 350 to the USD. From the mid-1970s to the mid-1980s, it traded at around the 250 yen per USD range.

There is little reason why it should not head towards the 150 level or worse as the economy is still in a deflationary mode (Q2 2014 GDP contracted by 7.1%), debt to GDP is approaching 250% and the demographics is getting older.

So, why is Japan destroying the yen?

1. QE by driving down interest rates has little impact on improving consumption or investments, contrary to intentions. (See Chart 4)

Despite the massive injection of global liquidity since 2008, GDP growth of major OECD countries remain anemic.

The reason for the above is the offsetting fall in the velocity of money.  The 2008 global financial crisis was the result of high debts and a property bubble. High and unproductive debts lead to falling velocity.  Velocity of money is the frequency in which money passes from one to another over a period of time. (See Charts 5, 6 and 7)

2. The government’s ability to stimulate GDP growth through fiscal expansion is severely limited with its debt to GDP approaching 250% and a persistent huge deficit. (See Chart 8)

The large fiscal debts must eventually be tackled to allow potentially effective fiscal policies in the future. The QE measures have effectively internalized these debts into the Bank of Japan, freeing up the banks and the pension funds to invest into the equity markets and overseas. This causes short-term gains and potentially a longer-term asset bubble, if liquidity goes into unproductive use.

3. To achieve growth, Japan has to rely on exports. And the strategy is to weaken the yen to increase export competitiveness, effectively exporting their deflation to other countries.

4. Weakening the yen also has the advantage of importing inflation. The Bank of Japan wants a targeted 2% inflation rate, compared with 1.2% at present, to encourage consumption and investments and elevate the economy out of the deflationary trap.

Consequences on other countries

While devaluing the yen may work well for Japan, what is the effect on other countries?

Unfortunately, it is a zero-sum game and others will react to protect their interests. Europe, which faces a similar risk of deflation and where growth is in doubt, would clearly also favour a weaker euro against the USD.

More critically will be the political repercussions within the US. The rising USD will affect US exports and employment and likely trigger calls for protectionism.

Closer to home, the strengthening of the USD with competitive devaluation in the region means most currencies in the region will weaken against the USD.

The question is the relative exchange rates amongst the regional currencies. And this will depend on a number of factors.

The factors include whether they are net exporters or importers of commodities (a higher USD means lower commodity prices in USD terms), the size of the country’s total debts to GDP and the debt structure (short versus long term, foreign versus domestic borrowings).

For Malaysia, how the ringgit performs relative to its regional peers will depend critically on two factors.

The petroleum and natural gas sector contributes to 8% of the GDP and 28% of the revenue to the federal government. The impact of weakening oil prices will be huge on export revenue, on the current account, on the fiscal budget and the general activities surrounding an industry that was extremely robust in the last decade. (See Chart 9)

The various QE measures by the US injected some USD3.55 trillion into the global economy, which saw interest rates pushed to all-time lows. Much of this liquidity found its way to emerging countries, including Malaysia, where the bond yield was at a substantial premium. At the same time, the USD was weakening, both a result of the weak economic outlook and the low domestic yield.

Investors pursued a strategy of investing into foreign debts with higher yield and rising domestic currencies.

Now that the USD is strengthening, and if the perception is that it will continue to strengthen, then there will be massive unwinding of the USD carry trades.

Malaysia, with 40% of its Malaysian Government Securities (MGS) owned by foreigners, may be more susceptible (than say Singapore) if there is a massive outflow of funds back to the US. The good news, however, is that since the 1997 Asian Financial Crisis, borrowings denominated in USD is kept to a minimum. (See Chart 10)

Next week, we will discuss the outlook for interest rates and who will ultimately pay for the ballooning government debts. What should investors do? 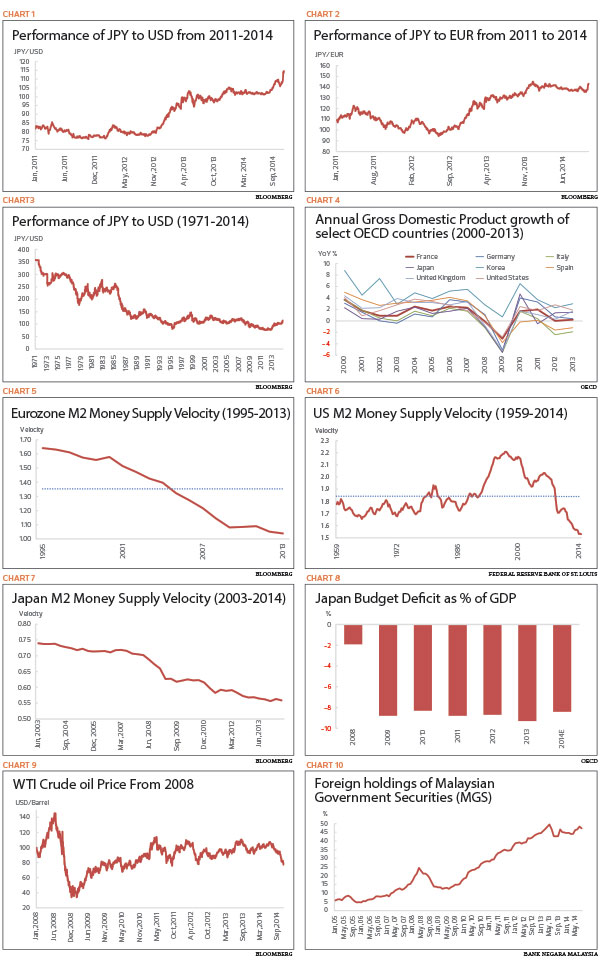