Start-Up: Lathering up with local herbs 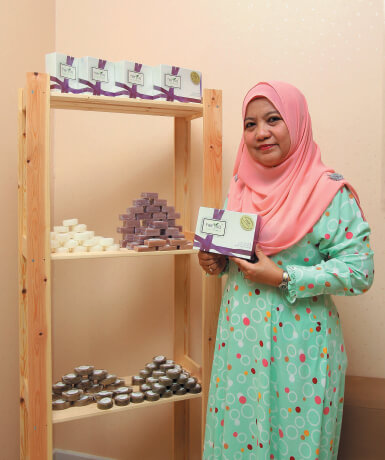 The only problem that we faced in setting up this business was that demand outstripped supply by quite a bit. This left us with no choice but to seek help from Mara to supply us with packaging and filling machines. > Savina

Imagine being in a company for more than 20 years. You invest your time, if not most of your life, ensuring the company’s success. And then one day, without warning, you are told that your services are no longer required.

“I felt numb and lost. It was quite jarring. This is what retrenchment feels like. Suddenly, your routine for more than 20 years is gone. And I can attest that my former colleagues felt the same way,” says Savina Khairuddin, founder of Herlysa Enterprise.

“I decided to use my last free travel tickets allocated as part of my staff benefits and went travelling with my family. While holidaying, I came across many shops or kiosks on the sidewalks selling handmade soaps in Amsterdam and Paris.”

Savina recalls that 10 years ago, not many Malaysians were environmentally aware or mindful of the chemicals in household or beauty products. “Now, we can name harmful chemicals such as paraben, hydroquinone and mercury. With this newfound awareness, I don’t think people mind paying more for a product made with safe ingredients. I thought to myself, perhaps this kind of soap [as well as skincare items] could actually sell well in Malaysia,” she says.

Upon returning home, she decided to establish this company with her husband, Zainal Abidin Kassim, a former chemical engineer for an oil and gas company. Also helping out with the business are her daughter Nur Aina Herlysa Zainal Abidin, whom the company is named after, and her son, Muhammad Qusyaire Zainal Abidin, who is in charge of marketing.

To equip herself with the necessary knowledge to run a business, Savina joined the Usahawan Bimbingan Mara Negeri Sembilan programme — an entrepreneur training programme by the Majlis Amanah Rakyat (Mara) Negeri Sembilan. “We moved from Kuala Lumpur to Negeri Sembilan because I figured it would be cheaper to rent a shoplot there and it would cost less to live there. We also learnt that by moving to a smaller state, it is easier to obtain facilities and assistance as there is less competition,” she says.

She has since attended more than 30 courses, conducted by various agencies such as the Malaysian Palm Oil Board, SIRIM Bhd and community colleges. “I attended courses on accountancy and making skincare and [body] creams. Now, because of these courses, we have over 100 formulas for skincare, from soaps and shampoos to day creams, night creams and moisturisers with SPF,” she says.

“The courses are very hands-on. They instruct you on how to do everything from scratch. I also do plenty of my own research. I read up a lot on traditional ingredients from India, China and Indonesia.”

Savina realised that many of her friends were prepared to spend a lot of money to maintain their personal appearance. “Women are concerned about their image. They want to feel attractive, so beauty products are indispensable. Even if they are on a tight budget, they will still find the money for this,” she says.

“I know of those who think nothing of spending RM600 to RM700 a month on beauty products, even if they are earning less than RM3,000. So, it is a recession-proof business model.”

Zainal Abidin, Herlysa’s research director, says women will use anything for beauty. Snail slime, for instance, is purported to have anti-ageing properties and women in South Korea have been using it for almost 20 years.

He adds that he takes it as a social obligation to produce safe and quality beauty products. “I know there are plenty of fake cosmetics sold in Malaysia. So, we came up with cosmetics that are real and good for the skin. For our cosmetics, we were given a notification number (NOT) by the Ministry of Health, which tells our consumers that our cosmetics are free of prohibited chemicals.”

Savina says handmade soaps are something new for the Malay market. “In this market, handmade soaps are considered a premium product as they are more expensive. [In Malaysia], most of the handmade soaps are made from organic raw materials imported from Europe and Australia. To make our products more affordable, we focus on using only local vegan and organic ingredients, such as our local herbs.

“In Malaysia, there are plenty of local herbs that we have not explored. For example, we met the Orang Asli to research local medicinal herbs and they told us that they use daun gelenggang, or the Senna tora leaf, to heal skin ailments such as rashes and scabs.

“So, to incorporate this into our soap, first, we dry the leaves and then blend it into a fine powder before adding it to our soap mixture. After the soap has been set and cured for 45 days, I try it on myself. If there are no adverse effects, I hand out the remainder of the prototype to friends and family. I am glad that some of the testers reported that their rashes subsided within two weeks.”

Although she is focused on using only local ingredients, she is also open to learning Southeast Asian herb remedies, such as the Indonesian Boreh herb mixture. “I learnt this herb recipe from an Indonesian [midwife]. The herb powder is used as a traditional scrub on women in confinement,” she says.

“All you need to do is mix the powder with water, apply it on the skin and leave it to dry. But when the mixture dries, the powder falls off, making it very messy. So I thought, ‘Why don’t I make it into a soap?’ The feedback for this has been great, with one of our testers saying that the soap has helped her eliminate flatulence.

“So, getting positive feedback has been very motivating for us, and this drives us to continue making and innovating new kinds of soaps.”

The global vegan market is growing exponentially. According to Euromonitor International’s Ethical Labels database, the global market for ethically labelled packed food and beverages was valued at US$793.8 billion in 2015. In 2020, it is set to reach US$872.7 billion.

It also found that vegan labels are set to grow at a compound annual growth rate of more than 5% a year, between 2015 and 2020. This translates into US$708 million in additional sales.

Last year, Malaysians spent US$500 million on beauty products alone. According to research by SIRIM, formerly known as the Scientific and Industrial Research Institute of Malaysia, the local cosmetics industry is estimated at RM3.6 billion and is expected to increase 13% annually.

Savina says the potential for vegan cosmetics in Malaysia is huge because anyone can use them. “For non-vegan products, not everyone can use them as they may be deemed non-ethical or even non-halal.”

Zainal Abidin agrees that there are numerous issues surrounding animal-derived ingredients, especially when it comes to applying for halal certification. “In Malaysia, it is difficult to get halal certification if you have animal-derived ingredients. For example, if your product contains fish scales, the Department of Islamic Development Malaysia (Jakim) will not approve it as halal. It is very strict,” he says.

Although getting the halal certification is easier for vegan products, it is not necessarily less tedious, he adds. “If you list turmeric as an ingredient, Jakim will inquire the source of your turmeric. If you bought it from a sundry shop, they will ask you to provide the shop’s halal certification! So, in terms of sourcing ingredients, if we import olive oil from Italy to use in our soaps, how will we get the halal certificate from the factory in Italy? The manufacturer will most likely ask why they even needed halal certification.”

Savina says they did not begin this business with the end in mind as they initially just wanted a small, artisanal family business. “We did not expect it to snowball to this scale where we will be opening our own factory, having already placed orders for good quality commercial soap-making machines.”

“The only problem that we faced in setting up this business was that demand outstripped supply by quite a bit. This left us with no choice but to seek help from Mara to supply us with packaging and filling machines,” he says.

“Once we have scaled up, the cost to make our products will come down to about 20% of what it is now. Now, a face cream costs RM10, but after mechanisation, we can expect it to cost RM2.”

Zainal Abidin says Mara’s reputation for rejecting a large number of proposals is unfounded. “It took only three weeks to approve our request. That is why it is important to submit a thorough and detailed business proposal.

“When the officers came to our shop for a site visit, we explained to them what we were doing, our business planning, compliance and even demonstrated how we made the soaps and skincare from scratch.

“Mara said it was happy with us and offered us free business consultancy if we needed it. It even said that if we needed capital for promotion, such as billboard advertising, radio, television, magazines and newspapers, it would be able to provide it.”

Savina says the company is fully self-funded. “We used capital from our existing investments and our Employees Provident Fund savings. You need at least RM500,000 to open a cosmetics business.”

Zainal Abidin adds that its annual profit will only be known at the end of 2016 as the company only started producing and marketing its products last year.

Zainal Abidin says the family has several plans for the company, which he hopes will be a legacy continued by his children and subsequent generations. In the near future, for instance, it will set up a factory with machines provided by Mara.

“We would like to set up a factory with good manufacturing practices (GMP). That is why we requested for machines from Germany. Once you have a factory with GMP status, you will have the Minstry of Health’s NOT certification. This will allow us to be an original equipment manufacturer and generate extra income for the company,” says Zainal Abidin.

He adds that he plans to franchise Herlysa. “Once the factory is up and running, we would like to have one shop per area, something like The Body Shop. We prefer to franchise our brand because we want the franchisees to have a sense of ownership.

“We also plan to export our products to Asean and perhaps beyond. But we understand that the competition is very tough and we need to prepare ourselves for that. There is also the risk of our products being re-engineered. But we know that will not be comparable with the original.”