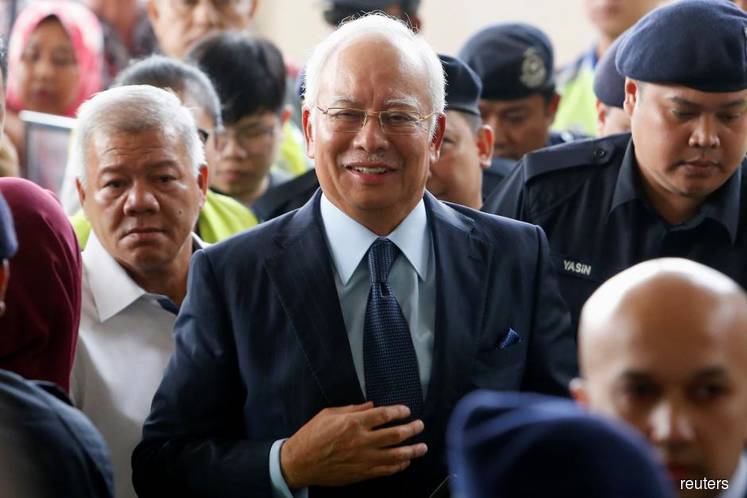 PUTRAJAYA (April 2): The court has today fixed Thursday (April 4) to hear the review application filed by former Prime Minister Datuk Seri Najib Razak on the apex court's decision to lift the stay on his SRC International Sdn Bhd trial. This leaves the big question of whether the trial will actually proceed tomorrow.

Najib, who is facing abuse of power, criminal breach of trust and money laundering charges involving RM42 million of SRC's funds, is scheduled to appear in court tomorrow afternoon for the start of the SRC trial.

But his counsel Havinderjit Singh told the Kuala Lumpur High Court yesterday that the defence has filed an application to review the Federal Court's decision to lift the stay on the trial of the SRC case.

Havinderjit, who told reporters today about the Thursday date for the review application hearing, also said he has been informed by the Federal Court Registry that the apex court will hear four other appeals raised by Najib and the Attorney-General's Chambers (AGC) on the same day.

When contacted, criminal lawyer Rafique Rashid Ali believes that the defence team led by senior lawyer Tan Sri Shafee Abdullah will argue that the trial can be delayed "at least for a day or two", given that the review will be heard the very next day, together with the four interlocutory appeals.

Regardless, the presiding judge will have the full discretion whether or not to go ahead with the trial, since the Federal Court — Malaysia's highest court — has already decided that the trial can commence. This, he said, gives a strong indication of how Judge Mohd Nazlan may decide tomorrow.

To have the apex court's decision revoked, Najib must be able to prove that he has met the threshold requirement for review, as set out in Rule 137 of the Federal Court Rules 1995, which stipulates that such review applications are made to prevent injustice, abuse of court process or any procedural unfairness in the Federal Court's previous decision.

Najib is facing three counts of criminal breach of trust, and one charge of abusing his post over the transfer of RM42 million from SRC. He is also facing three other counts of money laundering involving the same amount belonging to the company.

SRC is formerly a subsidiary of 1Malaysia Development Bhd (1MDB) that was set up by Najib in 2011 to pursue strategic overseas investments in energy resources, before its ownership was later transferred to the Minister of Finance Inc.

On March 21, the Court of Appeal dismissed three of four appeals filed by Najib, a decision which he is now appealing.

One of the three dismissed appeals was Najib's bid to obtain a gag order to prohibit the media and public from discussing the merits of his criminal case. The other two were related to his requests for more access to investigation documents, and the Attorney-General's move to transfer his case from the Sessions Court to the High Court.

Both Najib and the AGC have filed their respective appeals to the Federal Court.