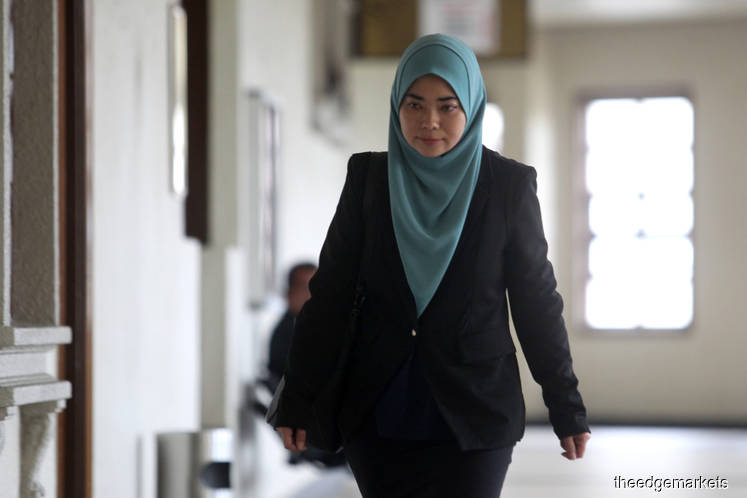 Its debt exceeds its principal because the sum also includes the interest owed as of May 2019.

The company, which was formed to advance Malaysia's management of strategic resources, is supposed to repay the entire amount by 2022.

Witness Afidah Azwa Abdul Aziz (pictured), who is the deputy secretary at the Ministry of Finance's strategic investment division, also told the court that SRC was seen defaulting its loan payments in 2015, 2016 and 2017, and it had to obtain a loan from the government to prevent an event of default.

The 44-year-old testified that SRC had outstanding interest payments in as early as August 2015, with KWAP sending letters to the company demanding it make payment or risk triggering the event.

Once an event of default is triggered, she explained, the government which stood as a guarantor for SRC would have to clear the RM4 billion debt to KWAP along with the outstanding interest within 30 working days.

She said that in order to avoid an event of default, SRC took a loan from the ministry to repay the retirement fund.

"The Malaysian government, through the Finance Ministry (MoF) as guarantor, need to be responsible to ensure SRC pay the interests for the loan by KWAP. Instead of SRC paying the interest, it sought help from the MoF for a short-term loan for the purpose of paying the interest.

"MoF agreed to give the short-term loan of RM92 million to SRC to pay the interest on the first loan which had been in arrears since August 2015. [For the second loan, SRC had been in arrears since September 2015.] A short-term loan agreement was signed between the government and SRC on Dec 2, 2015," the witness said while replying to questions from Deputy Public Prosecutor Datuk Suhaimi Ibrahim.

Afidah added that to obtain the RM92 million loan, an internal memo had to be prepared for the perusal of the Cabinet meeting on the proposed government loan and its reason.

The memo was brought to the attention of Second Finance Minister Datuk Seri Ahmad Husni Hanadzlah on Nov 4, 2015, and it was approved the same day, the witness said.

"The memo was tabled and approved by the cabinet meeting which sat on Nov 6, 2015," the witness said.

SRC's second and third govt loans also taken to avoid event of default
Afidah said that within her knowledge, SRC did not repay the RM92 million short-term loan that it took and it did not make any further payment on the KWAP interest, because the company had further asked for a short-term loan to pay its debt to KWAP.

"[As with the first loan], the main reason for SRC's application was to prevent an event of default that as mentioned would require the government to pay the whole RM4 billion loan taken by the company," she said.

According to her, out of the RM250 million loan, a sum of RM213 million was utilised or withdrawn.

The witness further added that she got to know that SRC did not repay the RM250 million loan or credit given by MoF and in 2017, SRC applied directly to the government for another RM300 million loan to pay for the principal and interest payment for the KWAP loan that it took.

"Despite this, MoF agreed to give the RM300 million loan for this purpose in order to prevent an 'event of default'.

"A loan agreement was signed on Dec 13, 2017 between the government [and] SRC where Mohd Isa signed for the government and Nik Faisal for SRC," she said.

She discovered that SRC's foreign accounts had been frozen since 2015, which may have prevented the company from paying the loan.