Special Report: Missing skills: Is higher education on the mark? 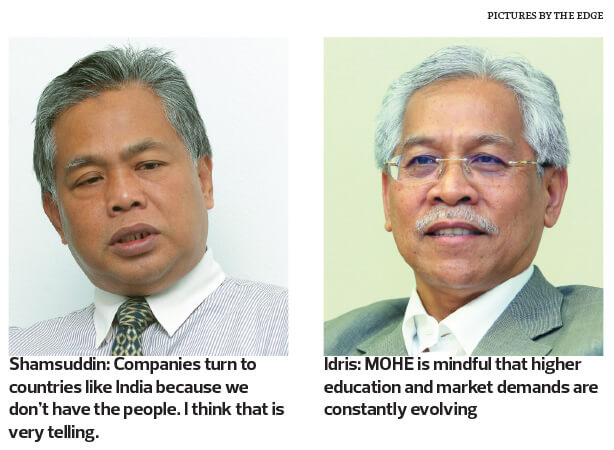 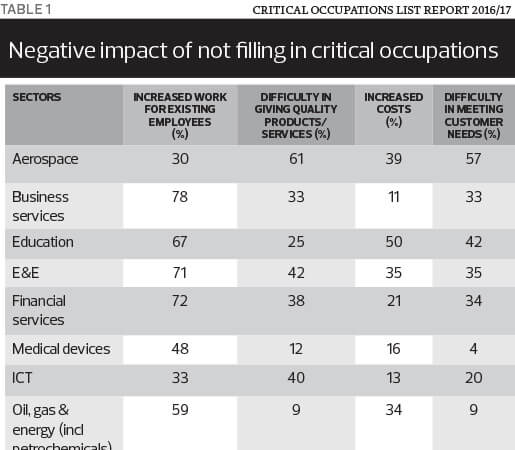 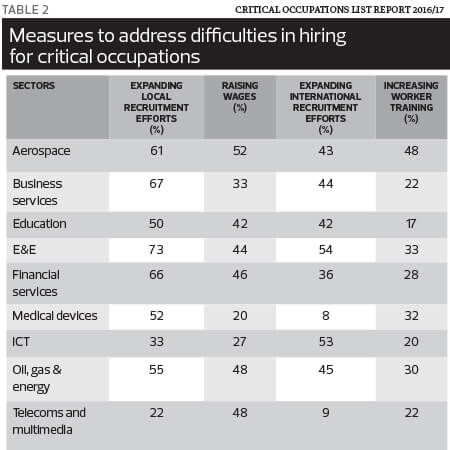 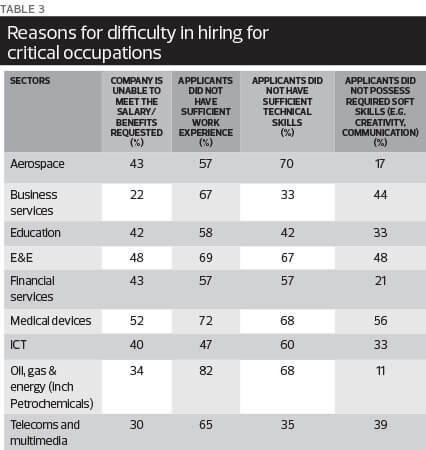 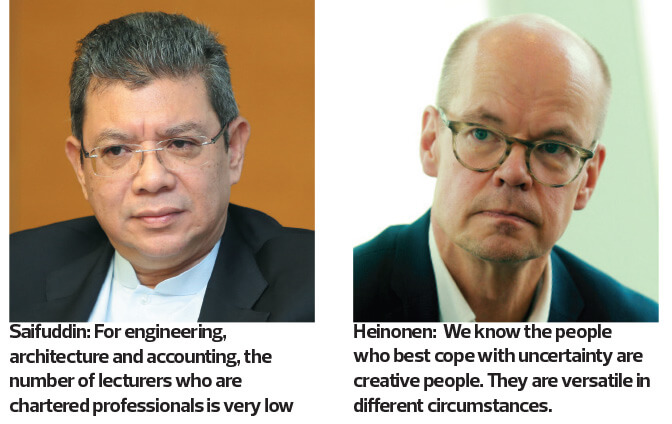 MALAYSIA’S growth story is coming under pressure from many sides, including a shortage of skilled workers in critical occupations, high dependency on cheap labour, which discourages investment in innovation, a higher education system hungry for resources and low collaboration between industry and academia. Can the stakeholders come together to solve this complex problem? Rash Behari Bhattacharjee and Syahirah Syed Jaafar examine the issue.

The list of human capital obstacles that the nation is facing is certainly formidable. Take the skills mismatch that hangs over graduate job seekers like an unwelcome cloud.

The shortage of skilled workers is not only seen in the persistent problem of youth unemployment but it is also cited by businesses as a key factor constraining investment. This raises a host of questions.

Can Malaysia’s higher education system close the gap between jobs and candidates’ skills that is making vacancies in critical occupations increasingly hard to fill?

The answer to that question is keenly awaited by the stakeholders — including students, higher learning institutions and businesses — whose fortunes depend on the outcome.

“With the current trend towards digitalisation, companies need data analysts to mine big data for business growth,” he tells The Edge.

“Unfortunately, a lot of IT graduates are not suitable for this work because they have not been trained for it.

“As a result, companies turn to countries like India because we don’t have the people. I think that is very telling. The industry has moved ahead but the system is not able to fit the industry with the right people.”

The COL report verifies this. It states that big data analytics was one of the top skills in demand in Malaysia in 2016, citing studies by recruitment consultancy Hays and career networking platform LinkedIn, in addition to the COL survey findings.

Worse, the crunch is not about to be resolved soon. Employers in the COL survey frequently responded that they found it harder to fill these vacancies compared with the previous year, or they expected the trend to continue.

Interestingly, the latest Hays forecast on Jobs and Skills Trends for 2018 sees “an explosion in new roles around artificial intelligence and data and a relentless demand for specific soft skills such as adaptability, creativity and collaboration”.

One constraint is that employers today want market-ready candidates to fill their vacancies rather than investing in training recruits, says Shamsuddin.

“Companies are not patient enough to train our people anymore. They say it is not their role. In the early 1980s or late 1970s, employers were prepared to train people, even up to one year. But now, they would rather have people who can contribute straight away to the organisation,” he says (see Table 2 on Page 56).

Recognising the huge challenges in skills development, the Ministry of Higher Education (MOHE) is engaged in a national transformation initiative to deal with this issue in all its complexity.

“MOHE is mindful that higher education as well as market demands are constantly evolving, with new skills, knowledge and expertise required,” Higher Education Minister Datuk Seri Idris Jusoh says in an email reply to The Edge.

“This means that MOHE too needs to evolve to ensure that educational offerings of Malaysian higher education institutions (HEIs) are in line with the needs of industry, while also keeping in mind the role of education to promote good values and appreciation for the arts, history and social sciences.”

As for why businesses found it difficult to recruit the right people, the top four factors were:

•    Insufficient soft skills such as creativity and communication. (See Table 3 on Page 56.)

Many questions arise from this conundrum: Why is there an unbridgeable gap between the remuneration offered and job seekers’ expectations? What lies behind the multiple skills deficits — student quality, deficient training, policy issues, or all of the above? Are industry and academia working together enough on solutions?

The Bank Negara Malaysia 2016 Annual Report shines the spotlight on the dilemma.

In an article on youth unemployment, the report summarises the multiple dimensions of the problem.

“Despite the workforce increasingly becoming more educated, job creation in the Malaysian economy has remained concentrated in the low and mid-skilled jobs, as domestic industries stay in low value-added activities that emphasise cost efficiency and dependence on cheap labour, rather than pursuing innovation as a source of growth,” it states.

“The Malaysian economy also continues to face the challenge of attracting high-quality investments that would create more high-paying, high-skilled jobs for the local workforce. In the meantime, firms point to skills shortage as a key factor that prevents them from making investments to move up the value chain.

“This mismatch between the changes in educational attainment of the workforce and the types of jobs created is also manifested to some extent in anaemic demand for fresh graduates, as online job postings for entry-level positions for graduates have remained largely stagnant since 2012.”

The article cites a 2014 survey by the World Bank and TalentCorp, which found that 90% of companies believe that university graduates should have more industrial training, and 81% of companies rated communication skills as a major deficit among graduates.

While businesses point to weaknesses in the national education and technical and vocational education and training (TVET) systems for the poor job prospects of graduates, the article notes, the lack of industry involvement in human capital development has also contributed to the dearth of effective training programmes for workers.

“The same TalentCorp survey found that 53% of firms have never engaged career centres in their recruitment efforts. Thus, even though youth may lack requisite skills, effective, meaningful training programmes that would prepare them for work have also not been forthcoming,” the Bank Negara report states.

Cognisant of the situation, the MOHE has been developing a national plan of action to bring the higher education system up to speed.

A key step forward is the Malaysia Education Blueprint 2015-2025 (Higher Education), which outlines 10 shifts that are designed to transform the higher education system.

Four of them focus on outcomes for key stakeholders, namely students in academic and TVET pathways, the academic community and people engaging in lifelong learning. The other six concern enablers such as funding, governance, innovation, international links, online learning and delivery.

By the ministry’s reckoning, important progress is being made towards addressing the skills mismatch.

“It is difficult to recruit good quality graduates as many either don’t speak good English or don’t have the right skills for the job. They are hired anyway and then retrained,” Chua tells The Edge.

Concerning the lack of soft skills, he argues that despite some effort to address the gap, there is no comprehensive and integrated approach to the problem.

As for the skills shortfall in professional fields like law, engineering, architecture and accounting, Saifuddin, in an email response, notes that these disciplines require several years of understudy with a supervisor and certification by an accreditation body.

“For law, it is not an issue. But for engineering, architecture and accounting, the number of lecturers who are chartered professionals is actually very low. So, what do you expect from the graduates?” asks Saifuddin, who is chief secretary of the Pakatan Harapan coalition.

Former Univerisiti Malaya vice-chancellor Tan Sri Ghauth Jasmon opines that the time to administer strong medicine is past due.

Noting that both public and private HEIs are facing a financial crunch, Ghauth, who is on the boards of Sunway University and the International University of Malaya-Wales, stresses that universities must address this predicament or perish.

“It will be difficult for universities to survive if they do not find ways to sustain financially, especially as the government cuts the budget for higher education,” he tells The Edge.

“Our traditional teaching methods and educational syllabus must be realigned so that we can accelerate education reform towards building 21st century skills,” she tells The Edge in an email.

“Educators and syllabus designers must recognise that today’s skills, with their short and decreasing shelf lives, are quickly becoming obsolete.”

Reformists often say the education system is the root of the problem.

For the DAP’s parliamentary spokesperson for education, science and technology, Zairil Khir Johari, the required shift in strategy will make our education system very different from its current form.

The key is to depoliticise education and let academic boards independently set standards and handle administration in response to community needs, he tells The Edge.

“The first part of the challenge is what needs to change in order that educational institutions produce graduates who meet a minimum bar of being employable — being able to communicate clearly, show a basic understanding of concepts and how to apply them to the real world, an ability to absorb and process information in the workplace, and an ability to write and produce output that is understandable,” says Ong, who is MP for Serdang.

To add to the pressures facing businesses, global developments, including the impact of the Fourth Industrial Revolution, are rapidly changing the rules of the game.

One expert who is helping the Ministry of Higher Education to prepare for this shift is Australia-based Prof Sohail Inayatullah, the Unesco Chair in Futures Studies.

Tracing various scenarios that emerge in an evolving learning environment, he presents a compelling case for fostering innovation in the education system.

“Teaching training should be adapted to prepare for a world after jobs,” he tells The Edge.

In this scenario, lifelong learning is not a fancy idea but a critical requirement for adapting to the new economic reality.

For example, in Finland, a world leader in education, some 2.5 million of its 5.5 million people are engaged in lifelong education programmes at any given time.

Finland’s former education minister and current director-general of the Finnish National Agency for Education, Olli-Pekka Heinonen, says, “We don’t know much about the future. We know the people who best cope with uncertainty are creative people. They are versatile in different circumstances.”

In a report entitled An Uneven Future? An Exploration of the Future of Work in Malaysia, Khazanah Research Institute director of research Allen Ng notes that as the landscape of employment changes over the coming decades, inculcating lifelong learning for all is essential to ponder, given two important trends.

“Firstly, the fast pace of progress in technology would most likely lead to more rapid cycles of obsolescence and renewal in the types of work and industries available. Secondly, together with the first trend, with the rise of independent work, the traditional employer-employee relationship could be eroded, which would simultaneously provide greater autonomy to workers but remove the stability of more traditional full-time fixed employment,” he says.

All said, the range of challenges adds up to quite a formidable test of our resilience as an economy. Can academia and industry forge a dynamic partnership to respond to this critical task?