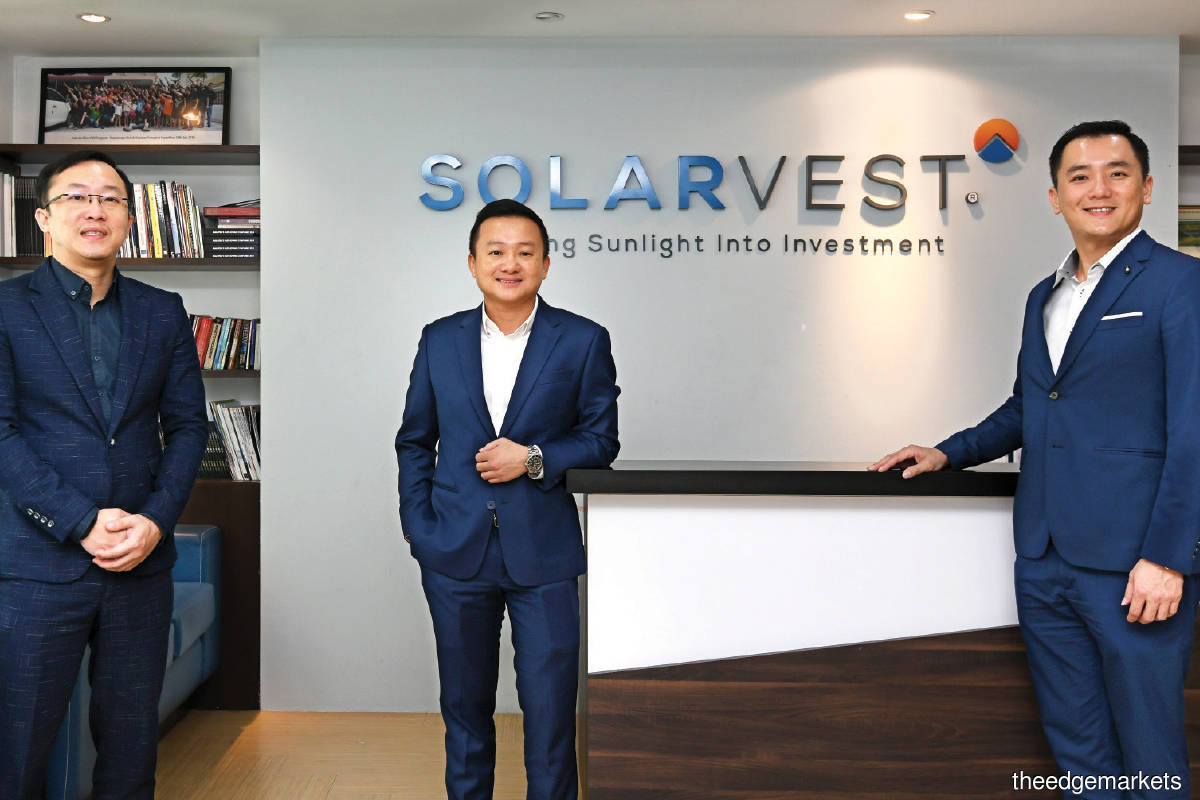 Lim (centre, with Chong and Tan): Being an asset owner and EPCC all by ourselves, we would be able to put cost advantage into the project. (Photo by Mohd Izwan Mohd Nazam/The Edge)

SOLARVEST Holdings Bhd, a solar turnkey engineering, procurement, construction and commissioning (EPCC) solution specialist, is making its debut as an asset owner in the fourth cycle of the large-scale solar programme (LSS4).

Solarvest was one of the bidders who recently won the government’s tender to develop LSS4, where it is to provide a cumulative capacity of 50 megawatts (mw) via three solar plants.

Being an asset owner, Solarvest will own, operate and maintain a 25MW solar farm to be constructed in Manjung, Perak, a 12mw solar farm in the same district, as well as a 13MW solar farm in Kuala Selangor.

As Solarvest embarks on the asset ownership business model, executive director Edmund Tan Chyi Boon says the group is now aiming for more such projects, which will provide stable earnings streams over the long run.

“We are targeting to increase our exposure in asset ownership on a yearly basis. Including our first 50mw in the LSS4, we aim to build a solar assets portfolio of about 200mw within the next three years. We hope the asset ownership projects will make up 30% of our group’s net profit by 2023 or 2024, and subsequently, increase further to 50% as early as 2025,” he tells The Edge in an interview.

Solarvest expects an annual earnings contribution of RM8 million to RM9 million from the three solar plants under LSS4, which are expected to be operational by end-2022 or 2023.

The recurring income will contribute positively to the group’s financial performance during the entire tenure of the 21-year power purchase agreement, which is expected to end in 2043.

While EPCC will remain the company’s bread and butter, CEO Davis Chong Chun Shiong says the recurring income generated from asset ownership projects is equally important. “With a passive income of RM8 million to RM9 million every year as our base, that will cover most of our expenses in other areas.”

The weaker financial performance was attributed to the Covid-19 pandemic and the movement restrictions implemented by the government, which resulted in the suspension of work at sites, at a time when most LSS projects had been completed.

Shares of Solarvest have gained 25% year to date, closing at RM1.54 last Friday, giving it a market capitalisation of RM976.29 million.

To achieve higher exposure in asset ownership for recurring income, Solarvest will not only be relying on the LSS4 but will also venture abroad. “Our priority is to go to Taiwan. Currently, we are eyeing a 40mw floating solar project there. We plan to go in with a local partner,” says Tan.

Solarvest is undertaking a power system study with state-owned utility firm Taiwan Power Co. The group has also issued a project bond to the Ministry of Finance (Taiwan) to get the rights to use government land.

“Unlike Malaysia, Taiwan doesn’t really have a LSS programme. The Taiwanese government is very careful about the environmental impact. We need to bid for the government land that has already been allocated for solar purposes,” he explains.

Taiwan has set a goal to achieve 20% renewable energy in its generation mix by 2025, as the island hopes to generate a total of 20Gw solar power in the same year. So far, says Tan, Taiwan is only generating about 4GW to 5GW, which means there will be plenty of opportunities for Solarvest.

“In fact, we think the Taiwan market can be potentially bigger than Malaysia. It is a good time for us to gain a foothold in Taiwan. Out of the 20gw, we hope to develop 1gw in Taiwan. But it doesn’t mean that we will own the whole 1gw. We will participate as an asset owner or co-developer,” he adds.

Solarvest managing director Lim Chin Siu says the company is in a favourable position to fulfil the requirements and financial close for the bids, backed by its robust financial strength.

It recently raised RM38.7 million from a private placement of 32 million new shares at an issue price of RM1.21 per share, bringing its cash in hand to RM80.3 million. As at Dec 31, 2020, Solarvest’s net cash position stood at RM64.3 million with a gearing ratio of 0.1 time.

It is worth noting that in the previous rounds of LSS, Solarvest had been making submissions for its clients to participate as co-developers, but the company’s main objective at the time was more of trying to get their clients’ EPCC jobs when they won.

However, in LSS4, Solarvest decided to submit tenders for asset ownership in the LSS programme on its own for the first time. Its average bid for LSS4 was around 22 sen per kilowatt hour (kWh).

Lim estimates that the costs for the three LSS plants will be around RM160 million to RM170 million. These projects will be funded by 20% equity — through private placement exercises — while the remaining 80% will be financed by term loan or sukuk.

“Again, being an asset owner and EPCC all by ourselves, we would be able to put cost advantage into the project’s internal rate of return (IRR), which we are confident of achieving 10% to 12%. As for the equity’s IRR, we are talking about 16% to 18%,” he says.

Chong points out that for the LSS4 alone, Solarvest is targeting to secure at least 265Mw to 300Mw of EPCC jobs — from eight to 10 projects — which are worth around RM600 million to RM800 million over the next three to 12 months.

“We are confident of securing these EPCC jobs because we submitted the tender for them, and we have the first right of refusal to take on the projects,” he says.