So, what was the ‘red shirt’ rally really all about 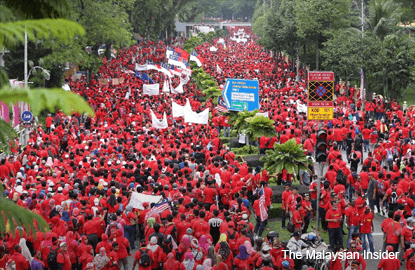 KUALA LUMPUR (Sept 17): Despite the belligerent rhetoric, yesterday's "red shirt" rally in Kuala Lumpur was more about supporting embattled Prime Minister Datuk Seri Najib Razak rather than protecting Umno, much less about defending the rights and dignity of Malays.

A few things which happened prior to the rally indicated this. The night before the rally, Umno’s deputy president Tan Sri Muhyiddin Yassin urged Malays not to attend the rally.

At the same time influential Umno strongman Tun Dr Mahathir Mohamed disparaged it. A report by The Malaysian Insider also quoted several Umno grassroots leaders who said they were against it.

Both Muhyiddin and Dr Mahathir are Umno leaders who have clashed with Najib and are figureheads for party members disenchanted with the Umno president.

Equally important is a Merdeka Center survey on Tuesday which showed that only 24% of Malays interviewed said that they supported the rally.

In comparison, 53% said they were against it, an indication that the majority in the community do not think that their jobs, families and futures are being threatened by "other races".

But what is clear from the gathering, said Ibrahim Suffian, director of the Merdeka Center, is that there is still a small hardcore group of Umno supporters who may totally believe the racist brinkmanship.

The paradox of losing power

Despite the stated intention to protect Malay dignity, not one speaker, except Malay right-wing group chief Datuk Ibrahim Ali, detailed how the community was being disenfranchised.

Neither did any speaker bring up the allegations of graft and financial mismanagement against troubled state investor 1Malaysia Development Berhad (1MDB) or the RM2.6 billion deposited in Najib's personal accounts.

Ibrahim only touched on Malay reserve land that has shrunk in the last 50 years.

He, however, did not mention that the power to de-gazette Malay reserve land belonged to the state governments and that for the past 51 years, Umno has ruled all of them except Kelantan.

Shaharuddin of Universiti Selangor said Umno members are rallying to protect Malays at a time when all the country’s institutions are controlled by Malays and Umno is the party with the most seats in Parliament.

“So where is the threat of Malays losing dignity or power? After 58 years of independence, do we still have to have rallies like this?” he said.

Which begs the question – was the rally about Umno members coming out to support the party?

For the Umno members who did show up, this was the real fear, said Ibrahim.

“The rally and rhetoric speak to a larger narrative where Umno is confronted with uncertain political prospects, due to a moribund economy, a sullen electorate burdened by the GST (goods and services tax) and an unpopular leader.”

Former Umno deputy minister Datuk Saifuddin Abdullah does not think that it was about saving Umno and points to the absence of top Umno leaders at the rally.

The highest ranking member was supreme council member Tan Sri Annuar Musa. Compare this with Bersih 4, which was attended by top leaders from PKR, DAP and Amanah.

“It’s not really about supporting the party but about backing some people,” said the former Temerloh MP.

Saifuddin said the clearest sign of what the rally was about was how it wanted to counter Bersih 4’s rally two weeks ago.

“Bersih 4 had five main objectives. It also included the goal of asking the prime minister to resign.”

Bersih 4 participants called on Najib to resign over allegations that he received RM2.6 billion in donations.

Saifuddin doubts that the red shirts were opposed to any of the five objectives, which include fair elections and a clean government. The most likely target was the call for Najib to resign.

“If Bersih 4 had wanted to topple the government, there would have been more people at the rally.

“But I think the Malays understand that even if you change the prime minister, the government will still be Umno and Barisan Nasional.”

And this is where the racist rhetoric comes in, said Saifuddin.

“You can’t really rally for something or someone that is indefensible and expect people to show up. So you use the race card and play with emotions”.

The second most popular battle cry at the rally behind “Malays must rise up” was “defend the elected government”. But no one responded when politicians who spoke at the rally said "Hidup Umno".

On the way to the rally, this writer bumped into a Malay friend who was on her way to a shopping complex. What she said encapsulated how urban Malays, at least, were responding to the red shirts.

Out of all the Malays she knew, only one was going to Padang Merbok.

And what about all her other Malay friends, what did they think?

“My other Malay friends went to Bersih 4,” she said. – The Malaysian Insider