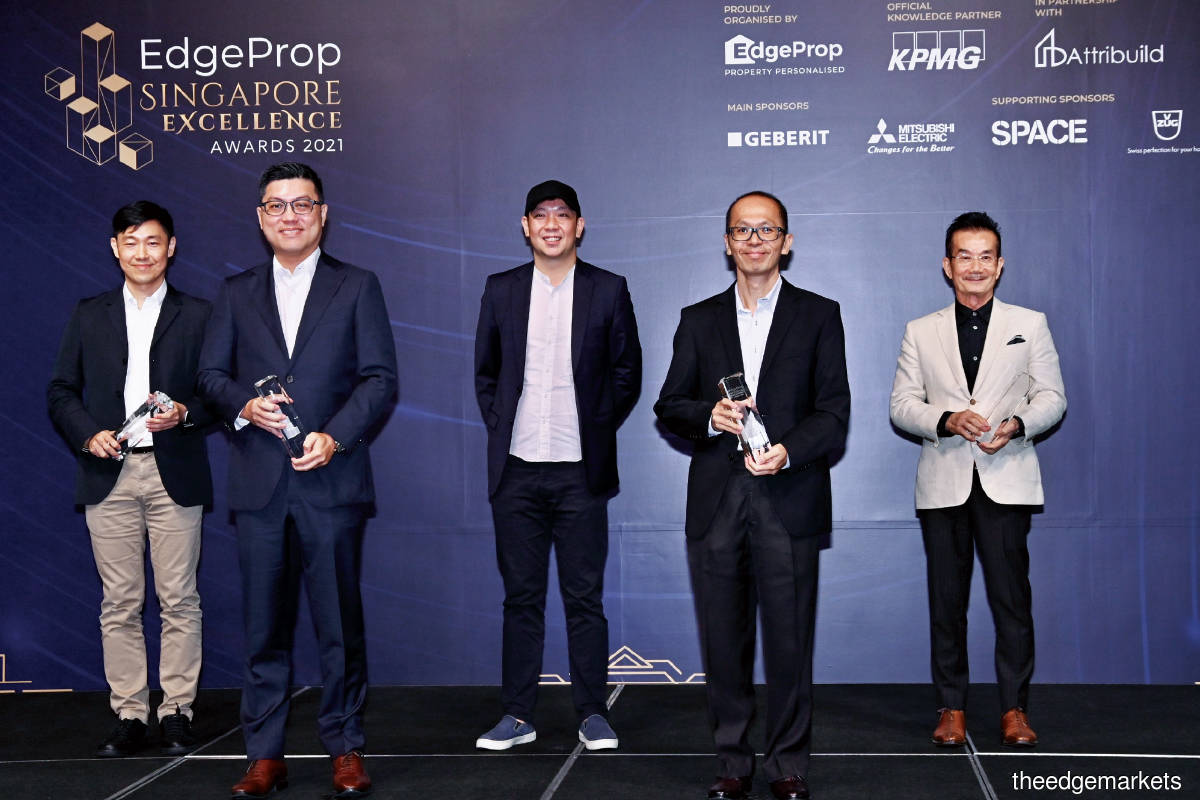 City Developments Ltd (CDL), Guoco­Land Ltd and a joint venture between Hoi Hup Realty Pte Ltd and Sunway Developments Pte Ltd have bagged the Top Deve­lopers award of the EdgeProp Singapore Excellence Awards 2021, it was announced on Nov 25 in the presence of 50 guests at a gala luncheon at Andaz Singapore.

The EdgeProp Singapore Excellence Awards is an annual event that recognises outstanding property developers and distinctive developments that set the benchmark for innovative and pragmatic approaches to deliver value in Singapore’s real estate industry. This year’s event will be broadcast on Nov 29 on EdgeProp’s social media platforms.

GuocoLand was a double winner as its CEO, Cheng Hsing Yao, also won the Personality of the Year award.

EdgeProp Singapore CEO Bernard Tong said the winners this year reflect the growing popularity of integrated developments. “Beyond just the convenience these projects provide, the judges also paid special attention to how well connected the different components are when they are put together,” he said.

KPMG Singapore reviewed the aggregated scores of all nominees.

An additional criterion — unit layouts — was added to the scoring consideration this year. To provide a quantitative assessment of the unit layouts within the qualifying project, this criterion was judged in partnership with Attribuild, a specialist in floor plan efficiency and usability.

Explaining the vision for its award-winning project, Irwell Hill Residences, CDL group general manager Chia Ngiang Hong said, “Conceptualised during the circuit-breaker period last year, its design was inspired by a renewed focus on wellness and health. This project places much emphasis on nature, flexible spaces and smart home features to cater to evolving lifestyles and changing needs.”

Hoi Hup Realty general manager Koon Wai Leong, co-winner of the Top Developers award with Sunway Developments, said the real estate market in Singapore is one of the most competitive, with world-class projects launched almost monthly. “To excel and to compete, a company like ours has to, through the years, continue to learn, improve, find our strength, our niche and to really dedicate ourselves to designing and delivering quality projects. This award is a validation of the company’s philosophy and the team’s hard work,” he said.

GuocoLand’s Cheng said being named a Top Developer was a great boost to the company’s confidence and morale. “But it is important for us to turn this honour into a source of motivation for us to continue to work harder, and do better to introduce new concepts and ideas that would meet the needs of our home buyers and tenants.”

On being Personality of the Year, Cheng said at the announcement ceremony, “Today’s event with everyone gathered here is already a testament of our resilience in the face of such an unprecedented global event that lasted way beyond what we had all initially assumed. I would like to congratulate everyone here for being able to stay strong under such trying times.”

Among the other prize winners, UOL Group Ltd’s Amber 45 scored a major win as one of the Top Development awardees under the Completed Projects category, alongside CDL’s Forest Woods and The Tapestry.

Midtown Modern, a joint venture between GuocoLand, Hong Leong Holdings and Hong Realty, also won significant prizes — the Top Mixed-Use Development and People’s Choice — as well as one of the Top Development awards under the Uncompleted Project category. It was also awarded Excellence in landscape, innovation and marketing under the Central sub-category.

The Top Luxury Development and Top Boutique Development awards were won by Shun Tak Holdings’ Park Nova. It was also awarded Excellence in design and showflat (luxury) under the Central Uncompleted Project category.

The two other Top Development winners in the Uncompleted Project category were BBR Holdings’ The LINQ @ Beauty World and TID Pte Ltd’s One-North Eden. The latter also won the Excellence award for sustainability under the Central sub-category.

The Showflat Excellence award under the Central Uncompleted Project category

was won by Qingjian Realty’s Forett at Bukit Timah.