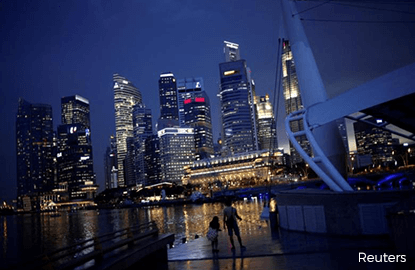 SINGAPORE, seen by economists to be the weakest-growing economy in Asean again this year, is expected to weigh on the earnings of the Malaysian banks with the most exposure there, namely Malayan Banking Bhd (Maybank), CIMB Group Holdings Bhd and RHB Bank Bhd.

Profits are expected to come under further pressure as the weak economy depresses loan growth and increases the risk of loan defaults, banking analysts say.

As it stands, the banking industry there as a whole has been seeing negative loan growth. According to the latest data from the Monetary Authority of Singapore, total loans at banks operating in the island republic declined 1.2% in November 2016 from a year ago — the 11th consecutive month of year-on-year contraction.

And, asset quality continues to weaken with the non-performing loan (NPL) ratio at 2.1% as at September 2016 — a level not seen since June 2010, observes Maybank Kim Eng analyst Ng Li Hiang.

“November’s banking system data validate our negative view on the sector,” Ng says in a Jan 3 report on Singapore banks. “Banks will focus on driving revenue and cost containment to offset more provisions that need to be set aside in the face of worsening asset quality.”

Maybank, the only Malaysian bank with a “qualifying full bank” status in Singapore, allowing it to carry the full range of banking services, is seen by analysts as the most exposed to the economy.

With 22 branches and more than 35 ATMs, Singapore is Maybank’s most important overseas market in terms of contribution to group profits. It accounted for 10.2% of Maybank’s nine-month profit before tax (PBT) of RM5.97 billion in FY2016, and a substantial 25% of its gross loans. In comparison, Maybank’s operations in Indonesia, its next biggest overseas market, accounted for just 8.4% of PBT. The Malaysian operations contributed the bulk, at 77.3%.

“It is a concern,” says a banking analyst of Maybank’s Singapore business. However, he points out that a rise in impaired loans in Singapore may not necessarily bump up the Maybank group’s gross impaired loans (GIL) ratio substantially. It would take a deterioration in the larger Malaysian operations to really move the needle.

He expects Maybank’s GIL ratio to move up to 2.4% this year from 2.2% in September 2016. “While in the fourth quarter of 2016, there may continue to be a reclassification of some ‘restructured and rescheduled’ (R&R) loans to ‘performing’, as seen in the third quarter, I expect the trend to reverse going into 2017, with more performing loans likely to be restructured.”

Maybank Singapore’s GIL ratio, which stood at 0.48% as at December 2015, peaked at 1.41% in June last year, but after the reclassification of some R&R loans in the third quarter, it came down to 1.01% in September. “The volatility is quite significant in terms of the NPLs coming from Singapore,” the analysts notes.

Last year, due to pro-active measures to restructure some accounts, Maybank Singapore’s PBT came in lower at S$175.99 million in the nine months of 2016 compared with S$298.51 million in the same period a year earlier. Loans fell 1.9% y-o-y.

Rating agency Moody’s Investors Service, in a Dec 6 report last year, expects Maybank to face rising problem assets in Singapore as well as in Hong Kong, another key market. However, it believes that the group’s strong buffers will mitigate the related risks.

“The rising problem assets in Singapore and Hong Kong reflect primarily idiosyncratic risk, and we expect in the longer term that Maybank’s credit profile will benefit from its presence in these otherwise low-risk markets. Maybank’s solid and growing capital base also provides the bank with a good buffer against rising problem assets, and will enable it to maintain its credit standing,” its vice president and senior credit officer Eugene Tarzimanov says.

Maybank’s problem loans in Singapore are mostly related to oil and gas (O&G) accounts, while those in Hong Kong stem from a small number of large problem loans, he adds.

“With oil prices coming back up and stabilising, it’s not to say the banks are out of the woods yet (from their O&G exposure). I think the volatility in provisions will remain,” says the earlier analyst.Maybank’s exposure to O&G stood at 4.3% of overall loans as at September.

Meanwhile, for CIMB, Singapore is its second biggest overseas market after Indonesia.

Last month, in an interview with The Edge, CIMB’s group CEO Tengku Datuk Seri Zafrul Aziz flagged that Singapore, where it has two branches. would be a challenging market for banks in 2017.

“Even though we are not big in Singapore, it does contribute about 5% to our bottom line. We’re not seeing NPLs going up there — we have very small exposure to the [troubled] O&G sector – so if you ask me, loan growth for us in 2017 will be flat,” he said. As at September last year, loans there fell 5.7% y-o-y.

CIMB’s total PBT contribution from Singapore in the nine months of FY2016 was 37.6% lower at RM199 million due to slower loans growth and increased commercial banking provisions.

As for RHB, Singapore is its biggest overseas market and it has seven branches. For the nine months of 2016, excluding a one-off impairment on the Swiber bond, the Singapore bank operations would have recorded a PBT of S$25.4 million, which was nevertheless 39% lower than that a year ago, largely because of higher impairment losses on loans.

Singapore, with an open and one of the most trade-dependent economies in Asia, is vulnerable to rising global uncertainties and sluggish external demand.

Last week, the Singapore government released advance economic estimates that indicated that the country’s gross domestic product (GDP) grew 1.8% last year, helped by a surprisingly stronger final quarter that came about because of a strong recovery in the manufacturing sector. The better-than-expected final quarter helped Singapore avert a technical recession.

Although the full-year growth beat official estimates of 1% to 1.5% growth, it was Singapore’s slowest expansion since 2009. While the government expects growth in 2017 to come in at between 1% and 3%, private economists remain less optimistic with a more conservative forecast of 1% to 2%.

“We maintain our 2017 GDP growth forecast of 1.8% and posit that headwinds include shorter nominal wage growth, slower employment gains, higher interest rates and uncertainties from the new Trump administration in the US,” says UOB Global Economics and Markets Research.