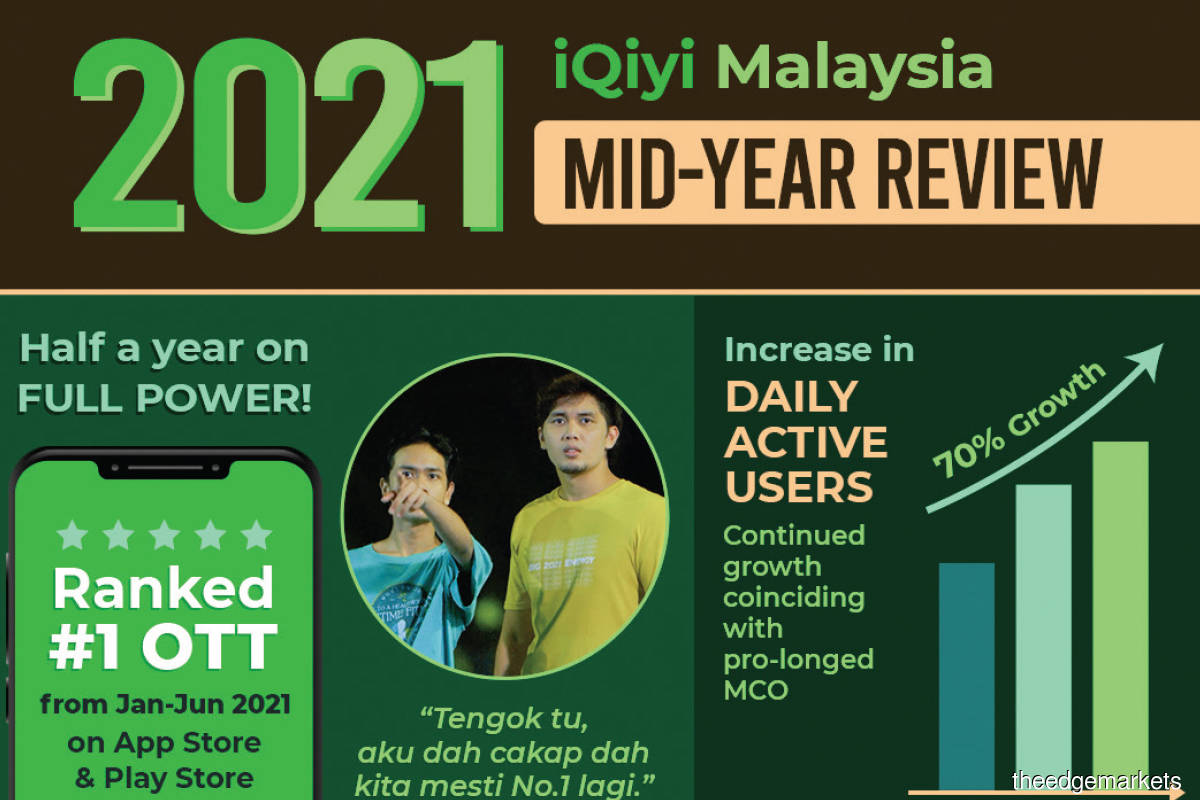 Over-the-top (OTT) media services started gaining traction before the onset of the pandemic. Covid-19 lockdowns further encouraged the growth and subscription of these services as people sought ways to spend their idle time at home.

iQiyi, an OTT platform that specialises in Asian entertainment, launched internationally in 2019 and became one of the most downloaded apps by August 2020. The platform’s Malaysian daily active users grew 1.8 times from January to December 2020.

By the first half of 2021, the number of daily active users increased a whopping 78%, says Frank Ye Tao, vice-president of product and user operations at iQiyi International. “iQiyi Malaysia is one of iQiyi’s fastest growing markets, having grown from a new entrant to one of the top OTT platforms.

“As for user behaviour, Malaysian consumers’ preferred content are local productions, Chinese and Korean dramas and anime. We also discovered that more Malaysian users are watching iQiyi on bigger screens, which optimises their viewing quality as iQiyi shows are available up to 4K viewing, with Dolby Audio.” iQiyi’s user demographics have expanded as well. Dinesh Ratnam, country manager for Malaysia, Singapore, Indonesia and Brunei at iQiyi, says while streaming services were used by younger audiences in urban areas, the pandemic has seen more users from rural areas, as well as an older user base.

As Asia is a mobile-first region, it is unsurprising that 80% of users consume iQiyi’s content via mobile devices, specifically on the Android operating system. Dinesh says this prompted the company to cater for its digital- and mobile-first millennial audience.

“The space is still dominated by younger and urban audiences, simply because internet connectivity is better in urban areas. I think that’s interesting because we noticed that consumption patterns were more during the day,” he adds.

Content consumption habits have changed as well. With more people working from home and hybrid work becoming the norm, people tend to feel the need to keep a show running in the background as they work.

This explains why the platform has had more consistent viewership during the day, Dinesh observes. Users tend to watch shows at different playback speeds to finish a particular show or content faster than usual.

“Traditionally, we would see content viewership peak during lunchtime and then it goes back down. We refer to this as primetime hours for streaming. But what we saw was a more consistent viewership throughout the day,” he says.

“We actually saw an increase in people using playback speed controls [to watch at a rapid pace], which is one of the more interesting trends that happened during the pandemic.”

iQiyi operates on a freemium model, which allows users to watch shows for free but with advertisements, and most users opt for this. However, there has been an increase in consumers subscribing to the paid premium packages, which are ad-free.

The appeal is the flexibility of its freemium model, says Dinesh. “What I mean by flexibility is the option to choose how they continue consuming content and also the ability to choose whether they pay for their content. VIP or paid users can even get some of that content earlier than free users.”

One of the company’s biggest investments is its Korean content, which prompted the platform to produce its own Korean content, says Dinesh. Its first Korean drama, My Roommate is a Gumiho, has been available on iQiyi since May 2021 and has received rave reviews.

On iQiyi’s home country of China, Dinesh talks about the cinematic developments of Chinese dramas as this segment has grown by leaps and bounds over the past 20 years, thanks to higher budgets and production values. “In 2018, the most searched entertainment title in the world was a Chinese title called The Story of Yanxi Palace, which is actually an iQiyi original,” he says.

Anime is another popular pillar in Asian entertainment. It used to be quite a niche genre, but interest in it has grown in recent years, says Dinesh.

iQiyi released an anime series called Attack on Titan, which resulted in it becoming the most downloaded app in Malaysia, surpassing MySejahtera downloads for two days.

Locally, iQiyi has forged a content partnership with Media Prima and Astro. With the former, top-rated television content is made available on iQiyi on a catch-up basis. With the latter, iQiyi has its own channel and Astro subscribers get to experience its offerings at a discounted rate. Preparing for the future of OTT

“With artificial intelligence (AI) and extended reality technologies, virtual productions have increased, allowing the production team to have more freedom in creating stage effects and lowering production costs,” he says.

The emergence of the metaverse will also be beneficial to the production side of things, says Tao. The development of metaverse technology will allow the use of virtual human technology, 3D reconstruction, motion retargeting and using AI to create realistic humanoid hosts and actors, he points out.

“This will provide a bridge and seamless transition between reality and the virtual realm by increasing user immersiveness, sense of participation and fulfilment, transiting from audio-visual to sensations that mimic reality,” he says.

That is why iQiyi is looking into developing an immersive viewing experience for users, says Tao. This includes accelerating the use of edge computing content delivery network systems, which will allow the platform to provide the fastest streaming speeds in the industry.

He adds that multi-camera interactive videos will solve the problem of user viewing angles, while cloud-based showcases will solve the issue of people not being able to gather due to physical distancing requirements to watch shows together.

“The way people view videos is developing multi-dimensionally — based on the ability to choose plotlines, change camera angles, interactive videos and more — bringing audiences a rich, interactive experience and creating more scenarios for application in the sports, e-commerce, travel and education sectors,” he says.

The advent of 5G technology also plays a role as it pushes for an 8K ultra-high resolution virtual reality (VR) and end-to-end live streaming system, which will solve common issues of long loading time, multiple pauses and transmission delays due to the 8K resolution high bitrate, as well as low effective transmission rate due to stitching and use of the panoramic signal.

Currently, iQIYI’s tests have been able to reduce the transmission rate by 75%, reduction of end-to-end delay to four seconds and zero milliseconds for moving objects on screen, says Tao. This ensures the resolution and smooth viewing experience of ultra-high resolution VR live streams.

“The integration of technology and content also impacts monetisation, which encourages creators and distributors to use varied methods during the viewing process,” he says.