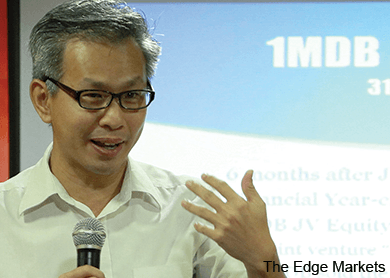 "Arul Kanda Kandasamy proudly announced that the sovereign fund made the US$488 million of profit from the PetroSaudi transaction but what we have at hand is at least US$1.1 billion missing in unknown whereabouts.

"The next question to ask is hence, where exactly is the US$488 million of paper profit Arul was talking about," said Pua who is also MP for Petaling Jaya in a press conference at the DAP's headquarters today.

Pua was commenting on 1MDB's claims last Saturday that a joint venture (JV) with a Saudi Arabian company six years ago, which critics claimed was shady, had earned it a profit of US$488 million (RM1.78 billion).

In a statement on the company’s website, 1MDB president Arul Kanda Kandasamy also claimed that the money invested in the JV had been converted into murabaha notes when the plan did not go through.

Earlier reports claimed that 1MDB had put US$1 billion into the deal with PetroSaudi International Ltd, a company with an allegedly sketchy track record.

1MDB had on Feb 21 claimed that a joint venture with a Saudi Arabian company six years ago, which critics claimed were shady, had earned it a profit of US$488 million (RM1.78 billion).

"Even Dr M wants to know where is the money but until today there is no proof," he said, noting that 1MDB  could show proof by getting a reliable bank statement to show where the money was parked preferably in cash and not in some dubious assets.

The exposed JV and Arul Kanda now gave stronger reasons to ask if the US$1 billion investment which was suddenly converted to a loan on the very last day of March 2010 financial year was in fact a cover up of the JV scam, Pua said.

By converting it into a loan to PetroSaudi, 1MDB  was then able to avoid reporting the details of the agreement in the 2010 financial report, he said.

In a statement on 1MDB's company website recently, 1MDB president Arul Kanda also claimed that the money it had invested in the venture had been converted into Murabaha notes when the plan did not go through.

Earlier reports claimed that 1MDB had put US$1 billion into the deal with PetroSaudi International, a company with an allegedly sketchy track record.

“In 2009, 1MDB entered into a joint venture with PetroSaudi, which was set up to undertake investments in certain projects.

“Both parties eventually decided not to proceed with the joint venture and our investment was converted into Murabaha notes.

“These Murabaha notes were paid back in full, with 1MDB earning a profit of US$488 million, in 2013,” Arul said in the statement.

He said this fact had already been made public in its accounts for the year ended 31 March 2013.

Meanwhile, on a report by TheEdge Financial Daily today that 1MDB is seeking cash injection of RM3 billion from the government, Pua said he was not surprised by the news but he questioned why 1MDB needed to borrow when it appeared to have some RM12  billion in assets,classified as level three, for the 2013 financial year.