In service to humanity for a priceless reward 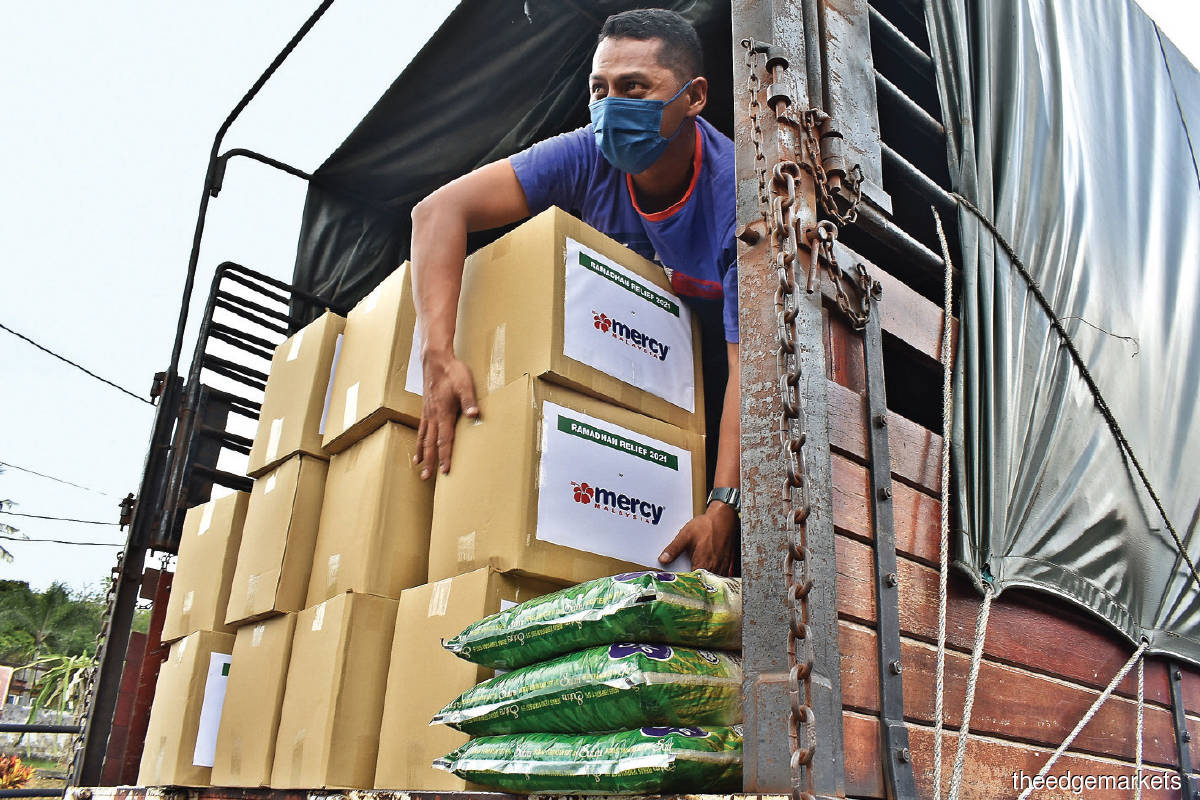 Over the last year, MERCY Malaysia has spent RM46 million on the pandemic

ON June 1, a MASkargo plane took off for India laden with critically needed oxygen and breathing equipment for distribution to hospitals and health service providers there.

It was MERCY Malaysia’s first shipment under its Covid-19 emergency response mission to that country, another remarkable episode in its 22-year record of humanitarian aid to people in crisis.

“When people are dying because they cannot get access to oxygen equipment, that’s a humanitarian crisis that fits MERCY Malaysia’s mission,” says its president Datuk Dr Ahmad Faizal Mohd Perdaus.

Secondly, because of the Covid-19 crisis, other patients who need oxygen have also died, because the health system is overwhelmed.

“We also understand the science [behind the pandemic],” says Ahmad Faizal, whose specialities are respiratory and internal medicine. As he also advises several government committees on the Covid-19 situation, Faizal has the benefit of both micro and macro perspectives of the crisis.

When a highly infectious disease like Covid-19 hits a country like India, it is a matter of time before dangerous variants will spread to neighbouring countries, he explains, pointing out the relevance of the current mission since India shares social, political, economic and cultural ties with Malaysia.

As this report goes to print, the Delta variant of the virus, which was first detected in India, is causing concern about a major spike in countries that had made progress in containing the disease. Faizal: We drive the organisation by synergising the energy and passion of the volunteers with the professionalism of our full-time staff

While self-preservation is inherent in the mission to India, MERCY Malaysia’s essence lies in the spirit of service to humanity, which pushes its teams to rush aid to the worst disaster zones around the globe.

That spirit has set the organisation on a pathway to the top league of international humanitarian groups, marshalling the energies of over 7,000 volunteers into a wide range of services in Malaysia and abroad.

The journey has been life-changing for the people in the organisation, the people it has helped and society at large.

“A smile from one of our beneficiaries, from someone who has lost everything, or who has nothing compared to what we have, and a thank you, is worth more than all the gold in the world,” says Faizal, quoting MERCY Malaysia vice-president Datuk Dr Heng Aik Cheng.

Humanitarian work, whether done on a voluntary basis or professionally, is very rewarding by itself, Faizal affirms.

“Whether you are a volunteer, or staff member of any voluntary organisation, there is fulfilment and reward that you cannot replace with material gain.

“The fact that you have done something good, and the fact that they can smile although they have nothing, that drives us, especially when there are difficulties and challenges,” he adds, referring to the experience of providing medical and humanitarian relief to destitute disaster victims.

A long way from its first mission

MERCY Malaysia’s work has grown in the last two decades to cover the full spectrum of humanitarian services, from emergency response to rehabilitation and recovery, mitigation and prevention, and disaster preparedness, taking its missions to 32 countries. It is a long way from MERCY Malaysia’s first mission to Kosovo in June 1999.

When its founder Dr Jemilah Mahmood (now Tan Sri) and her friends were moved by the plight of countless innocent victims of the Balkan conflict to organise that effort, they went as a backpacking group.

“At that time, little did they know that they were at the forefront of giving birth to an organisation that is now MERCY Malaysia,” Faizal recalls.

Their experience of the ravages of war at close quarters ignited the awareness that there is a need for concerted humanitarian work.

“It jived well with the fact that Malaysia was also coming out as a nation,” says Faizal, referring to the state of the country’s development at the cusp of the new millennium.

“We already had a society that was more exposed, more cultured, more educated, and that had skills that enabled us to help other people,” he says, in comparison to the previous generation.

For the first four years, MERCY Malaysia was fuelled fully by volunteer energy, supported by a small semi-professional secretariat.

A mission to the Darfur region of Sudan in the third quarter of 2004 was to change that. After the Darfur civil war erupted in February 2003, millions of people were driven into refugee camps or fled across the borders.

“We realised that we could not continue to do what we did, especially if we wanted to do it well, if MERCY Malaysia maintained itself as a fully volunteer-run organisation,” says Faizal.

Most leading humanitarian aid organisations based in developed countries reserve volunteers to a few selected roles. On the other hand, many groups especially in the Global South remain mainly volunteer-based, with a small professional corps, he says.

“We saw that was not sustainable, so we took the middle path. We espouse the spirit of volunteerism, and encourage volunteers to join us,” says Faizal.

“We strongly believe that volunteers bring an added advantage to our organisation,” he asserts. “A lot of that comes from their passion, sincerity and their willingness to give up time and money to help other people.”

However, enthusiasm alone is often not enough.

“In a war zone, for example, no matter whether you are a volunteer or a paid staff member, you cannot walk into a conflict area behaving like it is an ordinary day,” says Faizal.

Members of a mission are reminded to stick to protocol, be alert and be professional.

“They need to be more professional than in their daily jobs because there will usually be more constraints, especially in acute natural disasters. Everything has been destroyed, everything is not functioning, and so on,” Faizal points out.

“We drive the organisation by synergising the energy and passion of the volunteers with the professionalism of our full-time staff,” he says.

Volunteers such as Dr Kathreena Kadir embody the spirit that drives MERCY Malaysia’s success. Working as an oral and maxillofacial surgeon in Kuala Lumpur, she felt that she had to step in and support the effort to curb the Covid-19 pandemic when the second wave started in Sabah late last year.

“I feel like it’s a personal calling,” she said in comments emailed to The Edge. Being a Sabahan, she could not stand by and watch the worsening situation in her home state.

“I felt like I needed to be there to help them myself,” said Kathreena, who served as a frontliner for a few weeks last November.

A core value that guides MERCY Malaysia’s response to international crises is non-partisanship. This is pivotal in politically-charged arenas like the Palestinian conflict.

MERCY Malaysia has been providing a range of services to the people of Palestine since 2008, it says in emailed notes to The Edge.

In response to the latest round of bombing in the Gaza Strip, MERCY Malaysia issued an emergency appeal in May to mobilise humanitarian aid for vulnerable Palestinians living under occupation.

“We are of the humanitarian opinion that this calamity in the occupied Palestinian territories needs to be addressed fairly and justly so that it can have an end, because otherwise it will be a cycle that repeats itself,” says Faizal.

“It is our belief that this is one humanitarian crisis which needs a resolution that is all encompassing — a durable, sustainable, political, developmental and economic solution. We put it to the great powers, especially the US and the UN system, that it is in the interest of all globally that we see an end to this issue because it not only causes pain and destruction to people in the Palestinian territories, and although not on the same level, in Israel, but it breeds other problems, like extremism and terrorism which the world doesn’t want,” he says.

Notwithstanding its international presence, as a humanitarian organisation with health and medical services as its main focus, MERCY Malaysia’s first priority with regard to Covid-19 is Malaysia, Faizal points out.

“Since the first day we had a Covid-19 patient in Malaysia, in late January 2020, we’ve been on alert, and since February 2020, we’ve been in partnership with the Ministry of Health (MoH) and the National Disaster Management Agency (Nadma), in particular, as line agencies of the government,” he says.

This involvement later expanded to include the Education Ministry, Home Ministry, Women, Family and Community Development Ministry and other authorities.

“We recognise that we have to help engage and tackle the situation in Malaysia first and foremost before we spread our wings to other countries. That we have done actively,” Faizal stresses.

Over the last year, MERCY Malaysia has spent RM46 million on the pandemic, a relatively large amount for one non-governmental organisation in a country like Malaysia.

“We still need more, because it’s not ending anytime soon. We urge our corporate partners, private donors, philanthropists and the general public to come forward and continue to fund us, to help us to help the MoH, Nadma and other relevant agencies to overcome this pandemic,” says Faizal.

In operational terms, MERCY Malaysia’s pandemic relief programmes take three forms — those it runs on its own, activities where its volunteers are embedded in government agencies, and those it carries out in partnership with government and other partners. These efforts take the form of a full range of health and medical aid services, Faizal explains.

They include testing and screening, and providing medical equipment, ventilators and personal protective equipment to frontliners. Then there is assistance to hospitals that request for health support services, and providing volunteers for treatment missions, such as to Sabah in October last year.

Another aspect of its pandemic relief work takes the form of aid for vulnerable populations, including the urban and rural poor. This is given both as food aid and household items.

It also has a large mental health and psychosocial programme that is not often highlighted, he says. A hotline service in association with MoH is an important activity in this area.

Since last year, the organisation has also engaged in developing a pandemic preparedness and awareness programme. In association with Nadma, MERCY Malaysia runs a programme that takes it to rural communities to explain standard operating procedures for dealing with the pandemic.

Early in June, MERCY Malaysia set up its first vaccination centre in Melaka.

MERCY Malaysia is the only non-governmental organisation in the region to have a field hospital, which is usually deployed in acute natural disasters, but is now a priority since the government is looking at deploying more intensive care units and high-dependency beds, Faizal explains.

Finally, he points out that MERCY Malaysia puts great importance on the transparency and accountability of its operations. It publishes its annual reports not only on its website, but in mainstream newspapers in multiple languages.