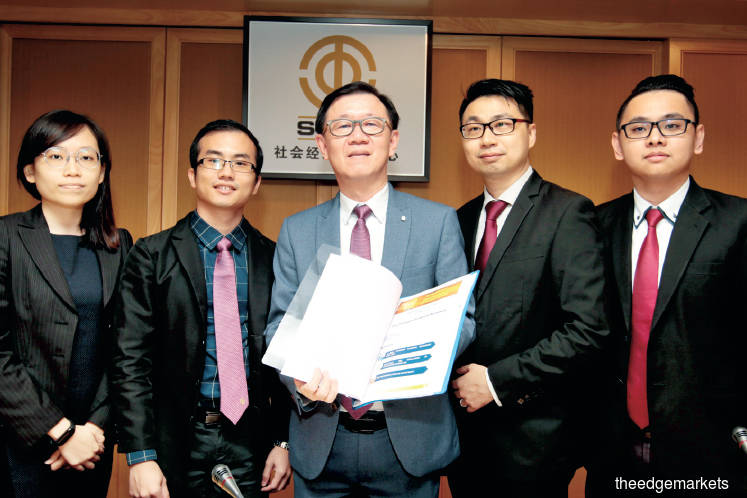 KUALA LUMPUR: Local think tank Socio-Economic Research Centre (SERC) has lowered its forecast on Malaysia’s gross domestic product (GDP) growth for 2019 to 4.5%-4.7% — from 4.7% previously — on expectations that export weakness would drag on the domestic economy.

SERC is forecasting that exports’ growth rate will halve to 3.3% this year, compared with 6.8% recorded last year, following the sluggish figures seen in the first two months of this year, said executive director Lee Heng Guie.

Speaking to reporters during a briefing on SERC’s first quarterly economy tracker yesterday, Lee said there are signs of slowing momentum in global economies, which led to some international institutions slashing their 2019 global growth forecasts.

He was referring to the International Monetary Fund’s announcement earlier this month to cut its global 2019 growth forecast for the third time to 3.3% — the lowest expected since the 2008/2009 global financial crisis — from the 3.5% it had forecasted in January and the 3.7% it expected last October.

Similarly, the Organization for Economic Co-operation and Development (OECD), in March, reduced its 2019 global economic growth forecast to 3.3% from 3.5% previously. The World Bank, meanwhile, had said in January that global growth would slow to 2.9% from the downward revision of 3% in 2018, on “rising downside risks”.

Externally, Lee said downside risks come from unresolved trade tensions between the US and China, the uncertain pace of monetary policy normalisation in the US, and volatility in the global oil price. Domestically, the oversupply situation in the property market does not help.

Other domestic economic indicators like private consumption and private investment are also pointing towards growth moderation, he said.

SERC expects private consumption growth to slow to 6.8% this year, versus the 8.1% seen last year. In comparison, the anticipated moderation in private investment growth to 4.3% from 4.5% last year is slight. But the latter reflects continued investors’ cautiousness about investing, given uncertainties surrounding the external environment and wariness of the domestic policy landscape.

Private investment needs to be re-energised

Lee said private investment, which has moderated over the past two years, needs to be given a shot in the arm. He urged the government to identify what is restraining business investments.

“Government has to be a good facilitator, should not be someone to hinder private sector to move, and address all their (private sector) concerns,” he said.

At the time of writing, the ringgit was trading at 4.1287 against the greenback. Over the past one year, it has weakened 5.9%.

Lee said there is an even chance that Bank Negara Malaysia (BNM) will decide to cut interest rates at its May monetary policy committee (MPC) meeting given external uncertainties that could undermine consumer and business sentiment, besides economic growth.

At its most recent MPC meeting in March, BNM decided to maintain the overnight policy rate at 3.25%.