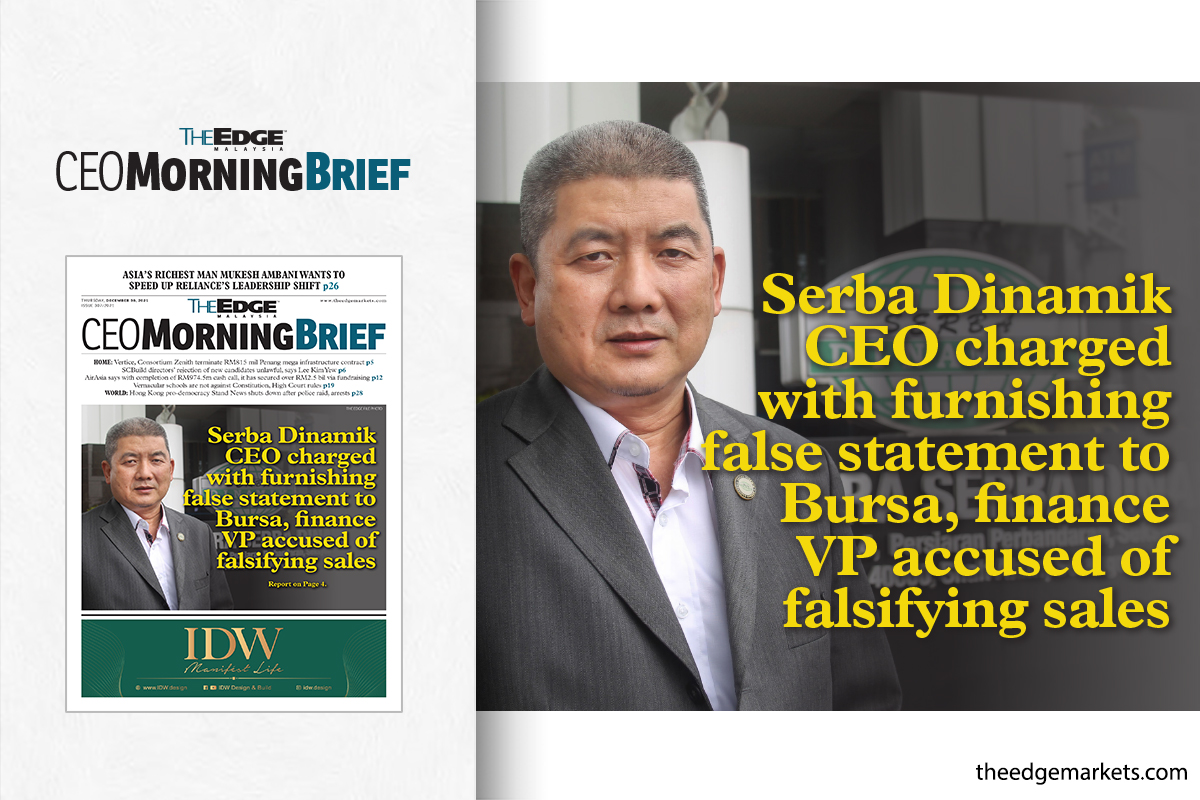 KUALA LUMPUR (Dec 29): Serba Dinamik Holdings Bhd chief executive officer (CEO) Datuk Mohd Abdul Karim Abdullah, who could not be located on Tuesday (Dec 28), turned up at the Sessions Court here on Wednesday (Dec 29) morning to be charged in relation to the group’s submission of a false statement to Bursa Malaysia.

Meanwhile, the group’s vice-president of accounts and finance Muhammad Hafiz Othman was slapped with an additional charge in the Shah Alam Sessions Court for allegedly creating fictitious sales, causing falsified revenue to be recorded in Serba Dinamik’s earnings report for the quarter and year ended Dec 31, 2020.

Abdul Karim, in his capacity as a director of the group, was charged under Section 369(a)(B) of the Capital Markets and Services Act 2007 (CMSA), in relation to a false statement contained in the oil and gas company’s quarterly report for the quarter ended Dec 31, 2020.

The Securities Commission (SC) in a press release on Tuesday said the false statement submitted to Bursa was in relation to a revenue figure of RM6.014 billion contained in the quarterly report.

Sabariah set bail at RM500,000 with two sureties, and also ordered Abdul Karim to report to an SC investigative officer pursuant to a schedule to be determined by the commission at a later date.

Additionally, the accused was not ordered to surrender his passport to the court, but was firmly reminded to ensure that he attends future court proceedings.

Meanwhile, finance VP Muhammad Hafiz was slapped with another charge in the Shah Alam Sessions Court for allegedly creating fictitious sales, causing falsified revenue to be recorded in Serba Dinamik’s financial report for 2020.

This was the second charge levied against him, after being charged in the Kuala Lumpur Sessions Court on Tuesday, along with Serba Dinamik, its executive director Datuk Syed Nazim Syed Faisal, and group chief financial officer Azhan Azmi in relation to the group’s submission of the false statement.

If convicted, they face a jail term not exceeding 10 years and a fine of not more than RM3 million.

Notably, Abdul Karim was also supposed to be charged on Tuesday, but he could not be located, which led to the regulator securing a warrant of arrest against him.

Abdul Karim’s lead counsel Tan Sri Muhammad Shafee Abdullah on Wednesday submitted before the Sessions Court that he had allegedly requested 24 hours from the SC to provide time for his client to communicate with his solicitors.

He claimed that this was the reason his client was not present in court on Tuesday.