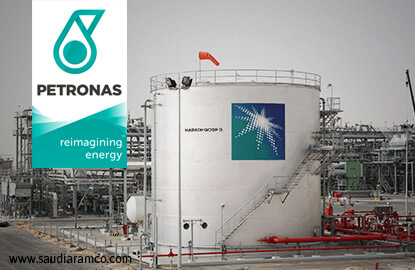 Najib said the decision was made before noon on Monday after discussions between top executives from Saudi Aramco and Malaysia's state-owned energy company Petroliam Nasional Bhd (Petronas), the sponsor of the US$27 billion Refinery and Petrochemical Integrated Development (RAPID) project.

Najib's statement marks a dramatic reversal in RAPID's fortunes after industry sources familiar with the matter said in January that Aramco planned to drop its participation in a partnership with Petronas in the project. At the time, Petronas said it would move ahead in spite of Aramco dropping out. Najib did not give any details on the change of heart.

"This is a significant investment and more details will be announced tomorrow," Najib said at a brief news conference after hosting a state luncheon for Saudi Arabia's King Salman and his entourage.

"I just want to confirm that the agreement has been reached and King Salman is satisfied that the deal will be signed tomorrow," Najib said.

Petronas and Saudi Aramco executives are scheduled to sign the agreement on Tuesday.

An industry source familiar with the matter says Aramco will buy a stake in RAPID's refinery, cracker and petrochemical operations. Aramco will also supply at least 50% of the crude that will be processed at RAPID, with an option to increase the supply, the source said.

The Aramco funding will help move RAPID to fruition and the desire of Saudi and Malaysian leaders to maintain close links between the countries likely helped cement a deal, said Subramanya Bettadapura, an oil and gas analyst with consultants Frost & Sullivan based in Kuala Lumpur.

"This investment confirmation would help bring the RAPID project to the commissioning stage," said Subramanya. "It's the goodwill of the Saudi king himself to invest and to maintain good ties with Malaysia, boost bilateral ties."

The RAPID project, located at Pengerang in Johor, is expected to begin operations in the first quarter of 2019. RAPID will contain a 300,000 barrel-per-day oil refinery and a petrochemical complex with a production capacity of 7.7 million metric tonnes. The complex will sit alongside an existing oil storage site at Pengerang.

Last year, Petronas sought proposals for a US$7.2 billion loan for the project, with separate guarantees from the company and Aramco, Thomson Reuters IFR reported in June.

Besides the Petronas-Saudi Aramco deal to be signed on Tuesday, Malaysia and Saudi Arabia signed four other agreements dealing with bilateral trade, human resources, scientific and educational cooperation and a news-sharing agreement between the state news wires of both countries.

Malaysia is the first stop in a rare month-long tour of Asia by the Saudis seeking to build ties and draw more investments to the oil-rich gulf nation.

King Salman is also expected to visit Indonesia, Brunei, Japan, China, the Maldives and Jordan "to meet with the leaders of those countries to discuss bilateral relations and regional and international issues of common concern," a royal court statement carried on Saudi Arabia's state media SPA reported.