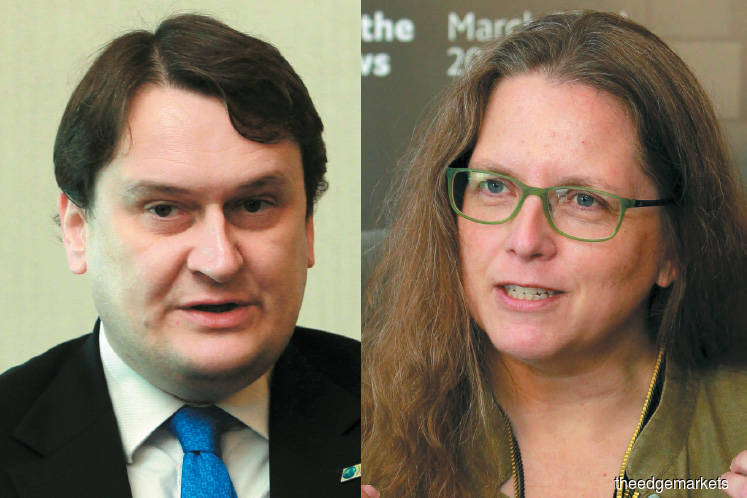 Stryszowski, who has been following this issue at the grouping of rich developed nations for some 10 years, observed that the scale of this problem has been growing in this region.

And it’s not just the scale of counterfeiting that is alarming, it’s also the scope, he added.

According to him, high-end brands used to attract counterfeiters, but now any product with a logo is a target.

“These days counterfeit goods can range from branded consumer products, spare parts, batteries and business-to-business goods to common consumer goods such as toothpaste, cosmetics and food.”

“If there is a product where people are willing to pay more for its brand name or for any other reasons such as safety and quality, this product can become a target for counterfeiters,” he told The Edge Financial Daily on the sidelines of the Global Illicit Trade Summit hosted by The Economist Events recently.

According to a 2013 report, the OECD estimated that counterfeit goods accounted for 2.5% or US$461 billion of global trade.

“That’s equivalent to more than twice the annual revenue of Apple Inc — and the number is growing. What’s worrying is that the scope [of counterfeiting] is also expanding. More products are being attacked or copied,” said Stryszowski. In 2017, Apple’s revenue stood at US$229.2 billion.

The report also warned that the business of counterfeit goods is “a significant economic threat that undermines innovation and hampers economic growth”.

“Counterfeiting is an illicit activity, which means there is tax revenue lost. This money is instead channelled into the pockets of organised crime groups,” said Stryszowski.

Trade in counterfeit goods not only negatively affects economic growth, but it poses a serious threat to the health of consumers as the goods are produced and distributed without any standards or norms.

Stryszowski noted that Asia is often singled out as the top place where counterfeit goods are made and sold.

“This is simply because of its high level of manufacturing activity. In addition, there are so many big ports in Asia. Some of them are misused as hubs for counterfeit trade,” he said.

However, counterfeiting is an issue for Chinese companies too.

“When we look at our statistics, we see that a growing number of Chinese companies are also victims of counterfeiting. Take Huawei mobile phones for example. They are often targets of counterfeiters,” he said.

“While it is easy to give a broad-brush remark that China is the world’s manufacturing hub for counterfeit goods, there is a nuance to that. So, caution should be paid before making one-line statement.

“To counterfeiters, what matters most is money. They don’t care whether it is Asia, Africa or America. Counterfeiters know no borders,” he added.

Stryszowski also described counterfeiting as a “disaster” for developing countries that are trying to move away from manufacturing to become a development hub where more creation of products takes place.

“Counterfeiting is a process that steals technology. So, imagine that you put a lot of efforts thinking and creating and end up producing something. Counterfeiting means that all these efforts of your creative thinking have been stolen and taken away. This means that countries that are exposed to counterfeiting are not likely to move up to start designing their own goods. They will always be locked in this trap,” he said.

Unfortunately, counterfeiting is rife around the globe and fake products are slipping into countries at increasing rates, for reasons that Stryszowski says lie in their low penalties.

“Penalties for counterfeiting are low unlike narcotics. Sometimes it is not even a big offence because it is seemingly a harmless crime. The rapid proliferation of products with so many distribution channels also makes [selling counterfeit goods] relatively safe and risk-free,” he said.

Stryszowski also attributed the rapid growth in counterfeit trade to governments not being able to catch up with the evolving structure of global trade.

“Organised crime or counterfeiters also know where the money is and they are aware that governments have problems with coordination. So part of the reason why counterfeiting is lucrative and why it is easy money actually lies in the fact that response from governments is still not yet to perfection.

“Of course, regulations are important, but only if they are enforced. The best rule of law that is not in place is basically useless,” he said.

“You can have soup but without a spoon, you cannot eat it. What we see in many countries, there are regulations, they are enforced but not to the extent that [is enough to stamp out the counterfeiters],” he added.

Asian Trade Centre executive director Deborah Elms concurred. “In general, we know how to deal with illicit trade and it’s not that you have to make new rules, you just need to enforce existing ones. If governments have the political will to tackle the issue, a lot of the problems can be resolved.”

“I think one of the struggles Malaysia faces is its wide boundaries and coastline and to keep guard of all that for the authorities is tough. When you add all of that physical space plus the free trade zones, I think that is a challenge,” she told The Edge Financial Daily.

Elms is of the view that consumers can play a major role in the fight against counterfeiting by being educated on the risks of buying counterfeit goods.

She also warned about the growth of e-commerce that is likely to lead to the explosion of illicit goods, thanks to it being less regulated. This is particularly so for goods where smugglers can profit from evading customs duties and taxes such as cigarettes and alcohol.

Meanwhile, Elms said it’s still uncertain whether the upcoming Digital Free Trade Zone in KLIA Aeropolis, Sepang, will be subject to the same challenges as traditional free trade zones in terms of trafficking fake goods. “You might have fewer challenges with the Malaysian system because they can police activity in and out of the warehouse better,” she added.

However, she cautioned that allowing a large company like Alibaba to take control of the e-commerce ecosystem here may not be the best approach as it will be difficult when law enforcers are unwilling to enforce the rules against these “very powerful players”.

Elms also pointed to the difficulty in securing sufficient data on illicit trade activities in Malaysia.

“The one reason why we don’t tackle illicit trade enough is because the numbers are missing. It’s very hard to say this is the problem as it’s very hard to get the actual numbers and to be able to say clearly that it comes from a certain location. So, you don’t really appreciate why it matters,” she said.

Elms believes that companies must be willing to share basic information about their goods in free trade zones with the customs, law enforcement and related agencies.

“If you’re not going to open up every box, which is unrealistic, then you can at least share information about what is in every box, what’s going into the zone, where did they come from and what’s the final destination of the goods,” she added.