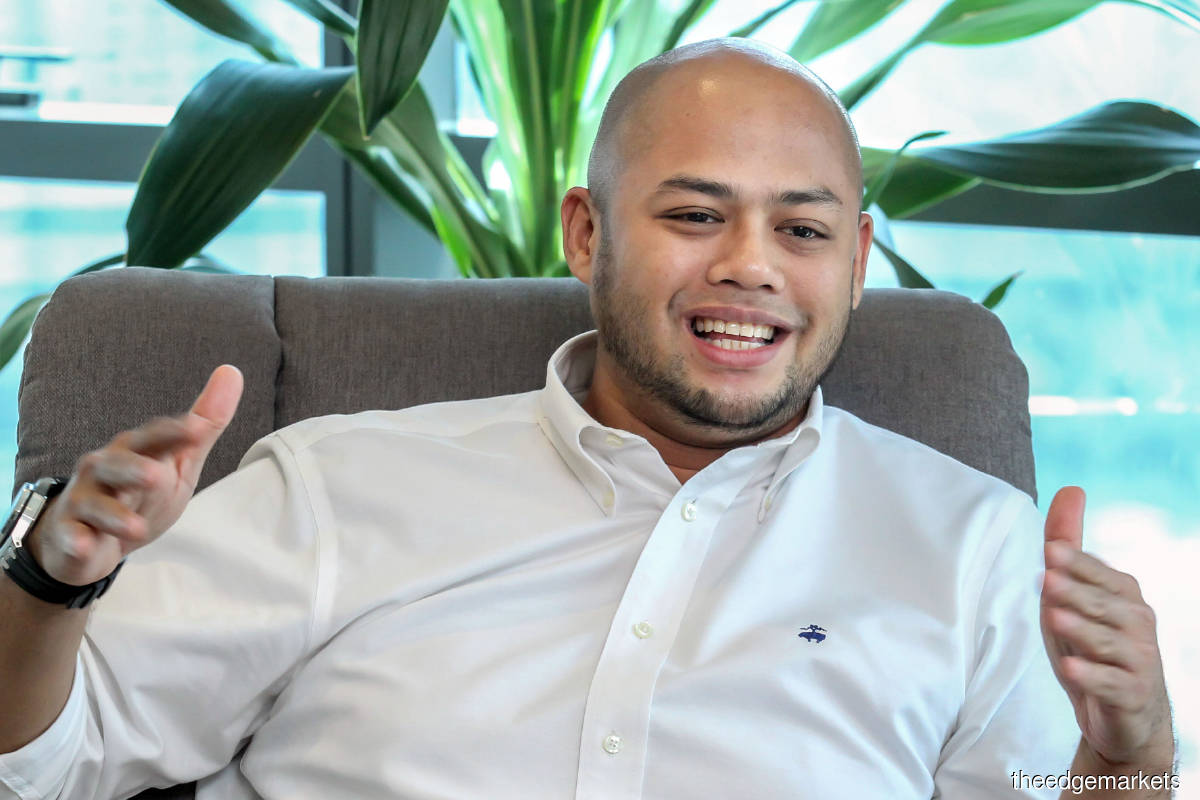 Syed Hafiz: For the past few months, our engine has started, and right now, we are very much focused on clinching a few deals in the near future

S5 Systems Sdn Bhd had stayed under the radar until it was thrust into the spotlight last year when news broke that it was an interested bidder for the National Integrated Immigration System (NIIS) contract worth over a billion ringgit.

This sparked intense speculation that the low-profile S5 is politically linked.

In his first media interview, S5 group managing director Syed Mohammad Hafiz Jamalullail acknowledged that he has political ties — mainly through his family — but maintains that the links have no bearing or influence on the company.

“If you’re talking about political connections, my dad used to be in politics — he was a former MP and it’s easy for people to link me to my uncle, who is the Raja of Perlis,” Syed Hafiz tells The Edge.

“As for the prime minister (Tan Sri Muhyiddin Yassin), the closest connection I have is through a golf charity organisation — Tan Sri Muhyiddin Charity Golf — in which I am a council member. That’s the nearest ‘connection’ that I have with the current government or political landscape,” he reveals.

On reported links to Muhyiddin’s son-in-law Datuk Muhamad Adlan Berhan, Syed Hafiz clarifies that they have known each other for quite some time and share the same circle of friends.

To the question of, if any of the political connections — including Adlan — is involved in S5, Syed Hafiz replies, “No.”

Syed Hafiz is the controlling shareholder of S5 with a 76.38% stake in the company’s holding company, S5 Holdings Inc. The other shareholders are MyEG Capital Sdn Bhd (a 10% stake), Merrington Assets Ltd (10%), and Avocat Sdn Bhd (3.62%) in which Lim Beng Guan — co-founder of ZJ Advisory — is a shareholder.

“I took over S5 in 2018 when the opportunity came up as Datuk Seri Johann [Young] offered me the chance to take over the company. We’ve known each other for almost 15 years. I had first ventured into IT in 2015, focusing on IoT (Internet of Things) technology, and saw this opportunity [in S5] as a good platform to fast-track my venture into the IT industry,” explains Syed Hafiz, who first ventured into business in the automotive and agriculture industries when he was 24 years old.

The entrepreneur’s initial venture in the automotive industry had involved manufacturing car leather seat covers for original equipment manufacturers (OEMs) both locally and internationally. He exited that company — Pecca Group Bhd — after it was listed. He is also in F&B — under the brand LaCucur — and the business of solar film supply to Perodua.

On his investment in S5, Syed Hafiz declines to disclose the takeover value. He also declines to comment on the reasons behind the exit of S5 founder Young, saying that it was not his story to share and noting only that Young has relocated overseas with his family.

“When I took over, the company was profitable and had three contracts — iKad (foreign workers’ ID); ISC (Immigration Security Clearance) where we do biometric background screening of all the foreign workers who want to come into Malaysia before they process their documents to get their visas; and NERS (National Foreigners Enforcement and Registration System) where we capture the biometrics of all foreigners who come into Malaysia and provide a complete suite of enforcement technologies to assist the Immigration Department. The NERS system is being implemented across all borders as well as all immigration offices and depots in Malaysia,” he says.

“S5’s core team stayed when I took over. At the end of the day, a company is about its people and we have a solid, experienced team at S5. The average length of service at S5 today is 8 to 10 years, with the longest-serving at 15 years,” Syed Hafiz adds, noting that while he also inherited S5’s customers and partners, which include the Ministry of Home Affairs, Heitech Padu Bhd and Fomema Sdn Bhd, he has also brought in various strategic new partners such as NEC, Oracle, Huawei, Sensetime, SAS, IN Groupe and Vision-Box.

RTO still on the cards

It has been many months since news broke of S5 Holdings’ RTO (reverse takeover) of Ancom Logistics Bhd (ALB).

On whether the exercise is still on, Syed Hafiz says, “Yes, we have been quiet for quite some time but it (the RTO) is still ongoing. We are at the tail end of it and we expect to put in the Bursa [Malaysia] submission for approval on the exercise by end-April, early May.”

“It’s mainly because of the NIIS project as it is one of the components in our valuation for the deal. So, it is more strategic for me to wait for NIIS to be awarded and then proceed with the submission. We are expecting to be able to have a much stronger submission and better valuation now,” explains Syed Hafiz, who is also a director of S5 Holdings.

But as the NIIS project was not awarded to S5 and went to Iris Corp Bhd instead, why would the award have any bearing on the RTO?

Syed Hafiz says S5 did not put in a bid for the contract on its own but has a collaboration with Iris for the NIIS submission and the value of its participation is “significant”.

“Being an incumbent player in immigration, especially in the scope of biometric and enforcement — that are part of core modules for NIIS — we believed we had more to offer and would be more efficient by collaborating and offering our expertise to other bidders.

“Our expertise and capabilities in biometric, border control, security and enforcement fields were much sought after … and that drove Iris, along with several bidders, to collaborate with us for the tender.

“Talking about Iris, yes we are currently finalising the partnership arrangements. [It’s] taking a bit of time, since both parties are very much focused on commencing the initial planning and works for the project now,” he reveals.

Eye on expansion and diversification

Syed Hafiz is cognisant of the fact that the S5 he took over was too reliant on a single customer — the government — and he has been taking proactive steps to diversify the company’s income stream.

“We are diversifying our income stream and we want to do it through strategic collaborations and partnerships. In terms of sectors, we are focusing on aviation, fintech and health,” he says.

“On aviation, we are focusing on solutions to provide customers with a seamless travel experience at airports. We are looking at semi-government clients like MAHB (Malaysia Airports Holdings Bhd). We are already in the immigration ecosystems, including providing automatic gates for Immigration clearance of travellers, but for now, the airport is a missing component. So, my focus is to be able to merge the airport and Immigration ecosystems together to enable a true, end-to-end and seamless passenger journey experience and process,” he says, adding that S5 has recently collaborated with an international partner to submit a tender to MAHB for a single token seamless project.

Syed Hafiz also sees business potential in fintech and plans to venture deeper into the sector.

“S5 currently has a presence in 12 source countries, in which its system is the first checkpoint for every single foreign worker candidate who intends to come into Malaysia for work. This has provided us with the opportunity to extend various new services and lock the customer base prior to them arriving in Malaysia, and these services include banking and telecommunications. That is the whole idea of it. We already have a strategic collaboration with a partner that has fintech presence in Indonesia, Saudi Arabia, the Philippines and Singapore,” he adds, noting that S5’s earnings are mainly from Malaysia as the pandemic has hit its earnings overseas.

“Yes, I admit the performance of the company in the years before I took over has been inconsistent. Well, in our industry, earnings are very much dependent on the acquisition, expiry and renewal of projects, as well as the operational costs. The year 2020 has been very challenging for us, and for the rest of the industry as a whole.

“For the past few months, our engine has started, and right now, we are very much focused on clinching a few deals in the near future … we are seriously focusing on the expansion of our client base and contracts through ventures into new industries,” says Syed Hafiz.