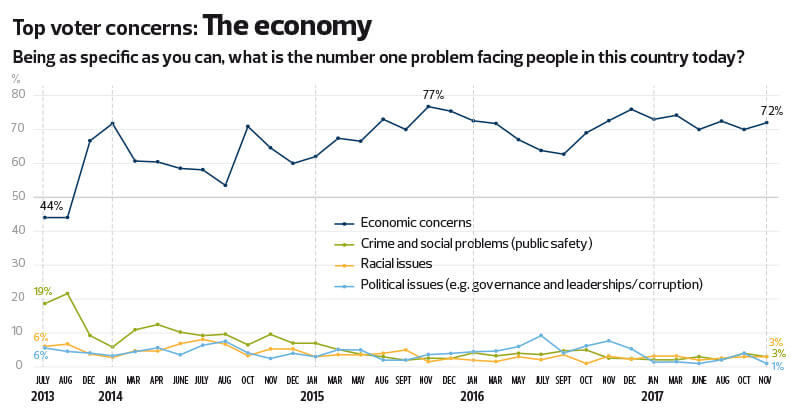 What are the concerns of voters that may decide who will get their vote in the upcoming 14th general election?

With almost 15 million registered voters as at June 30 last year, the issues they are preoccupied with would vary broadly according to their stage in life.

However, there are some common threads that bind them together.

Political analysts and leaders contacted by The Edge all opined that over the past 12 months or so, the main frustration among the majority of voters was the rising cost of living along with stagnant wage growth.

Merdeka Center executive director Ibrahim Suffian said regular surveys by his opinion research firm showed that respondents were concerned with these same issues throughout the past year.

“Across the board, whether among urban or rural voters, the young or old, it is basically about the rising cost of living and wages not increasing enough. That is the case we found nearly everywhere when we talked to voters,” he said.

“For young voters, the main issue is the difficulty in getting good jobs.”

The firm regularly conducts surveys at different levels and the situation has not changed for more than a year.

Ibrahim said middle-class and urban voters in particular are also upset about corruption and irregularities in government, which include issues like the problems at state investment company 1Malaysia Development Bhd (1MDB).

“People generally want to see changes in how the government does things but differ on what that change means,” he said.

“Urban voters want the government to clean up its act and deliver a multicultural perspective, but rural voters are more concerned about economic and infrastructure shortfalls.”

Nevertheless, he said, urban voters’ enthusiasm for change may have dimmed due to the fragmenting of the opposition coalition.

Analysts note that the breaking up of the Pakatan Rakyat coalition in 2015, just two years after the last general election, has dampened voters’ support for the opposition parties.

“The dissatisfaction of urban voters continues to linger but the enthusiasm for change appears to have dimmed somewhat as the opposition has fragmented — taking with it the prospects of a democratic breakthrough. Rural voters, too, are less happy due to cost of living pressures but will find their votes dissipated by the split in the opposition,” Ibrahim said.

For Institute for Democracy and Economic Affairs acting chief executive Ali Salman, the real issue is the deteriorating purchasing power of the people.

“Our challenge is not the higher cost of living; it is stagnant wages, because the cost of living increases in every economy as it progresses,” he said.

“This debate is being displaced by just focusing on the cost of living. As we improve our general income and have a better lifestyle, our demands change and the cost of living increases. The question is whether our income is rising proportionately or not.”

As for weak governance in Putrajaya, Ali felt that it may not be a burning issue for many voters.

“People have built-in expectations about corruption, therefore despite an issue like 1MDB, we haven’t seen people reacting to it significantly. I am afraid that corruption as such would not become a major issue in the upcoming election. People would not vote on the basis of who is clean and who is not,” he said in an interview.

“This is especially true in Malaysia, where the election is structured to favour the rural population. As a result, they have more influence on policy-making at the federal level. Many of them may not actually be involved in corrupt practices, but they receive government cash handouts or small development contracts, so generally people benefit from this sort of cronyism.”

Deputy Minister in the Prime Minister’s Department Senator Datuk Seri S K Devamany went further, saying that Malaysians were “fed up” with matters like 1MDB and allegations against the prime minister.

“Kepong (MP Tan Seng Giaw) has come out and said that the PAC (Public Accounts Committee) couldn’t find anything on him (the prime minister). Unless you can prove otherwise through the legal process, these are just perceptions and fake news. People are following the music of the opposition’s media coverage,” he said. Tan is the vice-chairman of the PAC.

“People are fed up of listening to the same old thing. They are more concerned about what the government can do for them. The opposition has been talking about it for a few years. They have got nothing more to talk,” Devamany told The Edge at Parliament House recently.

Devamany, who is MIC deputy president, claimed that the country’s structural issues are actually a legacy of Tun Dr Mahathir Mohamad’s 22-year rule.

“All the problems we are facing today are a legacy from him (Dr Mahathir) — the divide between the races and religions, the so-called unequal education system, the affirmative action that has gone beyond and the concessions that he gave, from highways to mega IPPs (independent power producers). People are realising all these,” he said.

He, however, agreed that Malaysians are facing a higher cost of living, which he said was due to the increasing demand for a better quality of life.

A constant issue of concern for voters — race and religion — appears to have been overtaken by economic matters.

PKR vice-president Rafizi Ramli, who runs the think tank Invoke Malaysia, opined that voters are generally less concerned about this issue this time around compared with previous elections.

“Race and religion is not so important this time, which had been a crucial issue over the past 50 years, because life is hard and people are forced to cut their expenses and their children’s,” said the Pandan MP.

Invoke Malaysia conducted a survey covering 565 respondents earlier this year and found that nearly 49% of them had permanent jobs but were not satisfied with their salaries while 24% did not have permanent jobs.

Merdeka Center’s Ibrahim agreed that racial rhetoric has cooled off compared with past elections, which he described as a positive sign.

“But the underlying reasons are varied. One possible cause is the changing nature of geopolitics. As Malaysia gets closer to China, continued race-baiting could pose a problem and invite unneeded responses such as the remarks by the Chinese ambassador after the 2015 Bersih demonstration,” he said.