LONDON-LISTED Aseana Properties Ltd (ASPL) may sell Aloft Kuala Lumpur Sentral if it receives an offer of RM482 million, or RM1 million per room. And should such a deal be executed, it would likely be the highest price per room seen in recent years.

ASPL, a 23.07%-owned associate company of Ireka Corp Bhd, has already been attracting potential buyers for the now 20-month-old asset. A total of RM300 million was invested in the hotel.

Ireka executive director Lai Voon Hon tells The Edge that the company has of late received a number of unsolicited offers to purchase Aloft. He adds that “our company would only consider any offer around RM482 million” and also hopes to get this amount if it eventually sells the hotel.

Lai is also the CEO of Ireka Development Management Sdn Bhd, the manager of ASPL’s properties.

Incidentally, Ireka set a record in 2007 for the most expensive hotel sold in Kuala Lumpur based on price per room. It sold The Westin Kuala Lumpur in Bukit Bintang, a 433-room accommodation, for an estimated RM455 million, or RM1.027 million per room, to Thailand’s Newood Assets Ltd.

Industry players say the Westin sale continues to be second only to the price fetched by Four Seasons Resort Langkawi. The development, which comprises 91 luxury villas, was also sold in 2007, by Malaysian Airline System Bhd to the Kingdom Group for RM4.97 million per villa.

Aloft, which commenced operations in March 2013, is the world’s largest Aloft property operated by the Starwood Hotels & Resorts Worldwide Inc. The Starwood group also operates brands such as Sheraton, Westin, W and Four Points by Sheraton. The Aloft in Kuala Lumpur is located in the vicinity of two other Starwood hotel brands — Le Meridien and the soon-to-open St Regis.

In terms of performance, Lai says, “It is a good performing asset for us.” He had, during the launch of the hotel last year, voiced his expectation that the return on investment for Aloft would be faster than the 8 to 10-year duration generally taken by hotels in Malaysia.

News of the eventual sale of the property is not surprising. ASPL is structured like a development fund — properties or projects in its portfolio will be realised over time and the money returned to shareholders. Other properties owned by ASPL in Malaysia include 1 Mont Kiara Mall, Harbour Mall Sandakan and Four Points by Sheraton Sandakan.

ASPL has a seven-year shelf life, which comes to an end in the middle of next year, unless it is extended. This is subject to the decision of a “continuation vote” at the company’s 2015 annual general meeting. In an interview with The Edge in September, Lai had said that the divestment of all of ASPL’s assets from 2015 was already being planned and the actual sales were only “a question of price and time”. 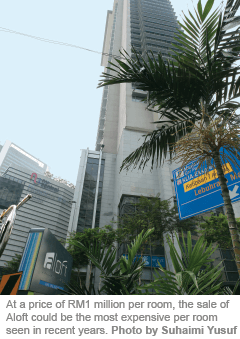 ASPL has an ongoing project called RuMa Hotel & Residences in Kuala Lumpur, which will be completed in 2017. It also owns an 80-acre seafront site in Kota Kinabalu, Sabah.

In the first quarter ended June 30, 2014, the group saw its net loss narrow to RM1.58 million from a net loss of RM6.75 million posted in the previous corresponding period. Meanwhile, revenue almost doubled to RM96.2 million from RM49 million.