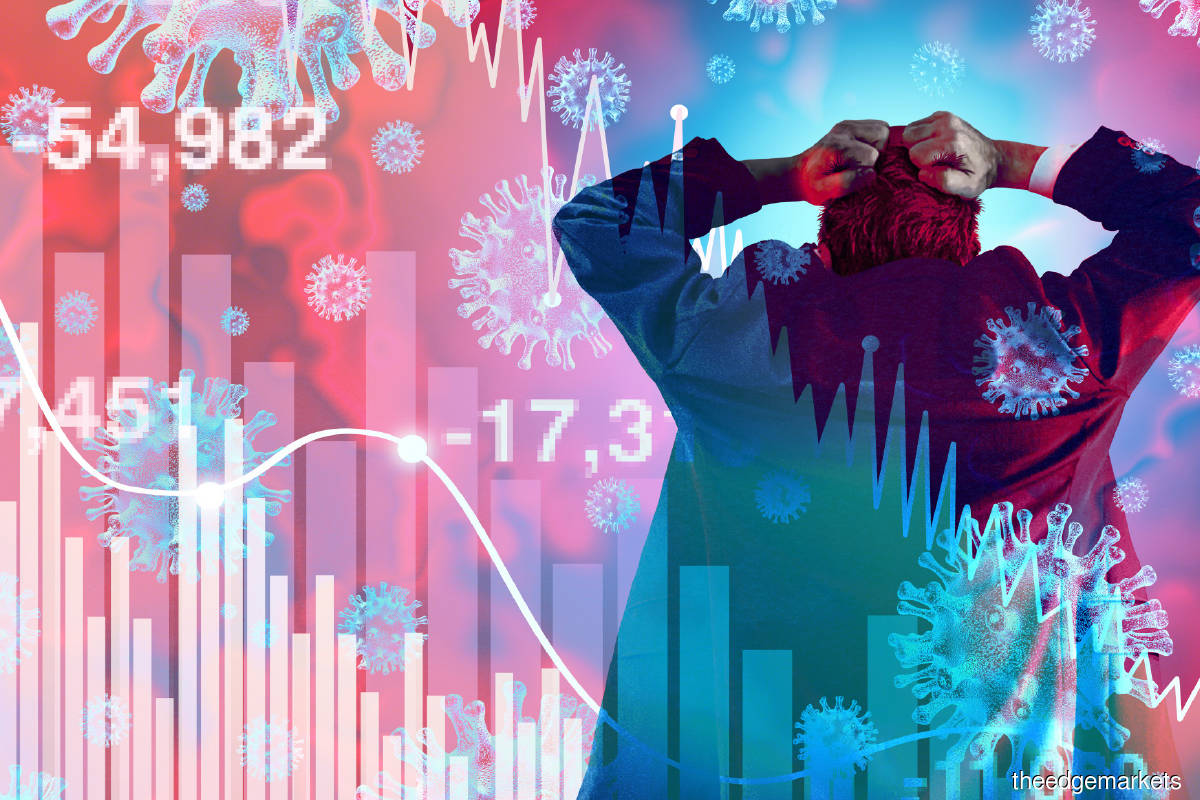 THE rising number of Covid-19 cases in the country — the infectivity rate of 1.19 hit a record high for the year on April 17 — coupled with the possibility of a fourth wave of infections could derail investor sentiment in the Malaysian stock market.

Heightening political risks also pose a threat, as some are unhappy with the government’s handling of the Covid-19 situation, and are challenging the declaration of emergency that was made in January. The country has been under a state of emergency since then.

“Another spike in cases, a blanket lockdown [by the government] and a delay in the national immunisation programme — either from a [domestic] shortage of vaccines or tepid registration for vaccines — will impact investor sentiment, hurt corporate earnings and postpone the [economic] recovery,” says RHB Research Institute Sdn Bhd head of regional equity research Alexander Chia Hock Lon. He cites domestic political risks and geopolitical developments as other factors that could derail the market.

In a note last Monday, CGS-CIMB Research also pointed to delays in the execution of the immunisation programme and the increase in Covid-19 cases as likely to dampen market sentiment and prompt investors to profit-take on recovery stocks given potential earnings risks.“We keep our KLCI target of 1,699 points (based on a forward price-earnings of 15.2 times). Our top three picks are Inari Amertron Bhd, Public Bank Bhd and Telekom Malaysia Bhd.” According to a Reuters report, Asian shares and US stock futures fell on Wednesday as concerns over a resurgence of coronavirus cases in some countries have cast doubt on the strength of global growth and the demand for crude oil. India has seen a sharp rise in cases in its second wave of infections, with new cases per day exceeding 290,000 last Tuesday, a more than fivefold increase compared with a month ago.

At US$65 per barrel last Wednesday, Brent crude oil futures have declined 5.6% from close to US$70 per barrel on March 12.

MIDF Amanah Investment Bank Bhd head of research Imran Yassin Md Yusof agrees that the pace of vaccination and unexpected surprises on the political front are two of the top three downside risks to market sentiment. The other risk is potential volatility induced by a change in monetary stance, especially by the US Federal Reserve.

“We believe that the recent spike in US Treasury yields may portend more volatility in the financial market, including ours. We saw a similar case in 2013 in what was then dubbed a taper tantrum. This is especially as the US Fed may continue to be dovish despite the signals from the bond market that it might need to address,” he says.

The optimistic outlook for the US economy, with a multitrillion-dollar stimulus, loose monetary policy and good progress in vaccinations, and inflation expectations, could raise the 10-year bond yield above 2% by year-end and to around 2.5% by end-2022, which was the two-year monthly average prior to the Covid-19 pandemic, observed TA Securities head of research Kaladher Govindan in an April 4 note.

“This is completely possible even without a rate hike due to market expectations as what happened between 2012 and 2014 when the Fed held the target rate at 0.25% but the 10-year yield more than doubled to touch slightly over 3% during the period before retreating. However, in an inflationary environment, a selldown in the bond market should bode well for high-yielding assets like equities, as investors see them as a viable choice to cushion from lower returns.

“Of course, stocks will take a hit initially as producers can’t pass the increasing costs to customers immediately, but as the economy grows, rising income and wealth will translate into greater consumption and investment. Eventually, producers will be able to raise the prices for their products and services higher than the corresponding increase in cost, which will translate into better profits and attractive valuations. Value stocks would be a better choice compared to growth or dividend plays during inflationary periods,” says Kaladher.

However, total trading volume on the local bourse has since slowed, to 217.93 billion last December and 210.99 billion in March.

On whether the liquidity rally could be over — despite the low interest rate environment, which helps to boost the market’s liquidity — RHB’s Chia believes that this isn’t the case.

“Global interest rates are to remain accommodative for the foreseeable future while the tone of guidance from the US Federal Reserve on its quantitative easing has not changed. The anticipated spike in inflation is transitory and due to [a lower] base effect. Higher bond yields are indicative of a recovery scenario,” he says.

Earlier this month, Fed chair Jerome Powell was quoted by Reuters as saying that the Fed would reduce its US$120 billion monthly government bond purchases before committing to an interest rate increase.

In the Malaysian context, MIDF’s Imran says it is fair to ask to what extent liquidity played a factor this year, especially for retail investors.

“We opine that liquidity was more of a major factor last year given the loan moratorium, which may have enticed retail investors to start coming back into the stock market. Initially, we believed that participation from retail investors might taper once the blanket loan moratorium ended. However, that has not been the case, as highlighted by data from Bursa Malaysia.

“In terms of the year-to-date participation from retail investors, it amounts to 39.2% of total trades as at April 20. Therefore, we opine that this level of retail participation may continue for another year or so,” he adds.

As for the US, which is still awash with liquidity, Imran believes this may start to lessen should the US Fed begin to taper its bond purchase programme.

“We believe that there is a possibility of that happening by the end of the year. This will cause some bouts of volatility in the market but given that we expect the overall trajectory [for the market] to be upwards, then it will present opportunities for investors to buy,” he says.

TA Securities is maintaining its positive view on the market in anticipation of economic and corporate earnings recovery, based on the progress in Covid-19 vaccinations globally, strong commodity prices and potential return of foreign shareholders owing to the FBM KLCI’s relatively attractive consensus FY2022 price-earnings valuation of 13.7 times versus its five-year average of 16.3 times and comparable peers’ 14.2 times.

“Buy undervalued blue chips and recovery plays in the banking, gaming and property sectors, and commodity stocks in the oil and gas and plantation sectors while nibbling stocks in the telecommunications and technology sectors that have benefited from the ‘new norms’ created by the Covid-19 pandemic and [which] will continue to benefit from disruptive technologies,” says TA’s Kaladher.

Among the brokerage’s top picks are Axiata Group Bhd owing to its regional footprint in growth markets as well as prospects of unlocking value from its digital and infrastructure businesses; banks such as Malayan Banking Bhd, Hong Leong Bank Bhd and RHB Bank Bhd as they are a proxy to economic recovery and a pickup in capital market activities; and gaming groups Genting Bhd and Genting Malaysia Bhd, which are expected to see a pickup in activity once interstate and international travel is allowed again.