RHB Capital Bhd
(April 8, RM 8.25)
Maintain add with a target price (TP) of RM10.50: On April 5, 2015, we wrote about the possible internal reorganisation of RHB Capital (RHBCap), which could include a rights issue. Our subsequent attempts to gather more information from the management have been fruitless as the bank is unable to comment while discussions with Bank Negara Malaysia about the required capital level are ongoing.

Furthermore, the situation is fluid, with various possible forms for the deal. What we know, however, is that the purpose of the rights issue is to pare down debts at the holding company level.

We estimate that RHBCap will raise between RM1 billion (sufficient to lower its double leverage ratio to 120%) and RM3 billion (sufficient to fully pay off debts at its holding company) from the potential rights issue. Based on our simulation, the exercise will dilute RHBCap’s financial year ending Dec 31, 2016 (FY16) earnings per share (EPS) by 4% to 12% given assumptions that i) the rights issue will raise a total of RM1 billion to RM3 billion; ii) the rights will be priced at a 15% discount to the market price; and iii) savings on interest charges will be 4% of debt repayment.

We advise investors to stay invested in RHBCap to capitalise on its bright earnings prospects given its robust loan growth and benefits from the Ignite 2017 transformation programme. In the event of a rights issue, our TP will fall to between RM9.30 and RM10.05, based on the potential EPS dilution of 4% to 12%.

Based on our analysis, we think that RHBCap will raise a total of RM1 billion to RM3 billion from a potential rights issue aimed at reducing its gearing at the holding company level. We estimate that the exercise could dilute its FY16 EPS by 4% to 12%. For now, we retain our dividend discount model-based TP (cost of equity of 11.8%, long-term growth of 4%). Despite the possibility of a rights issue, RHBCap remains an “add” and our top pick for the sector as we are positive on its earnings prospects given the rerating catalysts of i) above-industry loan growth; ii) benefits from its Ignite 2017 transformation programme; and iii) swift expansion in Singapore.— CIMB Research, April 7 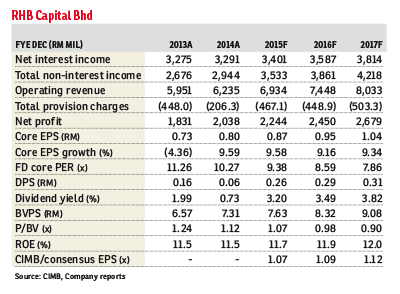