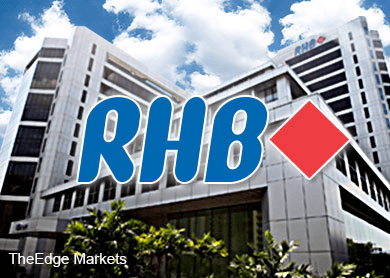 The higher earnings was achieved on the back of 2.9% total income growth and lower loan impairment charges, partially offset by higher operating expenses and lower impairment write back on other assets, the banking group said in a statement to the stock exchange today.

However, its funding and interest expense were higher by 29.5% due to higher customer deposits base by 10.8% y-o-y.

Net interest margin was at 2.22% for the current quarter compared to 2.26% in the preceding quarter.

RHB Cap's operating expenses increased by 4.3% to RM819.9 million on  a 5.8% increase in personnel costs and increase in information technology expenses.

On its allowance for impairment on loans and financing, it saw a decrease of 7.4% to RM50.2 million from RM54.2 million last year.

"This was primarily due to lower collective allowance and lower bad debts written off, partially offset by lower impaired loans and financing recovered," it explained.

"Excluding one large corporate repayment during the quarter, gross loans growth would have been at 2.2% q-o-q," RHB Cap noted.

It said the growth was broad based, predominantly from purchase of residential and non-residential properties, working capital and purchase of securities.

On its gross impaired loans ratio, it stood at 2% as at end of first quarter which is stable compared to December 2014.

"Nevertheless, we are pleased that our business operations have been resilient and continued to show reasonable top line growth," he added.

Khairussaleh said the group's transformation plan "IGNITE 2017" has continued to gain good traction in the 1QFY15.

According to him, the group's key priority is on executing prioritised set of initiatives under IGNITE 2017 to support its growth agenda for the rest of the year.

"In addition, given the current challenging operating condition, the Group will put extra focus on managing overhead and funding costs, return on risk adjusted capital and asset quality," he added.

"Barring unforeseen circumstances, the Group's 2015 performance is expected to be better than 2014," he commented.