RHB Asset Management to grow portfolio to RM58b in 2015 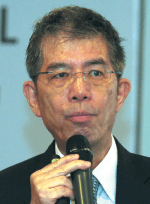 KUALA LUMPUR: RHB Asset Management Sdn Bhd aims to grow its assets under management (AUM) to RM58 billion by year-end, with Malaysia expected to be the largest contributor to the growth.

“It is a fair target for this year and it is achievable looking at the plans we have,” he said at a press conference after the launch of the RHB-OSK Global Equity Stabiliser Fund.

“We are launching 16 funds in Malaysia and 25 funds regionally,” Ho said.

He said as RHB Asset had built a strong repertoire in Malaysia, the group expected the local equity market to significantly contribute to its AUM despite the volatility seen this year.

According to Ho, RHB Asset would leverage RHB group’s established presence, reputation and network besides growing business opportunities and good performance of its existing funds.

According to RHB’s website, RHB Asset was established following the merger of RHB Asset and OSK-UOB Investment Management Bhd in December 2013.