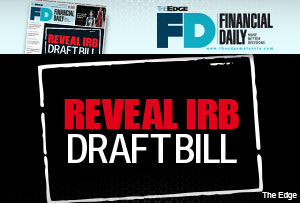 KUALA LUMPUR: Pakatan Rakyat wants the government to reveal the draft of amendments to the Inland Revenue Board (IRB) of Malaysia Act 1995 by today to allow time for opposition members of parliament (MPs) to prepare before the controversial bill is tabled for its second reading in Parliament on Tuesday.

The bill is to amend a section of the Act.

A random check by The Edge Financial Daily yesterday revealed that the government has yet to brief any of the Barisan Nasional MPs on the amendments to the Act.

A source close to the matter said the proposed bill is likely to be read along with the original bill when the Ministry of Finance (MoF) addresses Parliament on Tuesday.

“PKR would like to alert the public that the IRB amendments will be tabled again in this coming session at Parliament.

“We know this because the government has issued the Order of Proceedings for the October parliamentary session that has been scheduled for the first day of Parliament on Oct 7,” Kelana Jaya MP Wong Chen, who is a PKR lawmaker, told a press conference at the PKR headquarters yesterday.

The government previously postponed the controversial bill from June this year to October after receiving a backlash from tax experts and the opposition.

Under the previous bill, the government had planned to propose the set-up of an investment panel within the IRB that will allow the Finance Minister, who is Prime Minister Datuk Seri Najib Razak, to appoint six out of the seven board members in the panel.

For such an important legislation, the proposal is completely unbecoming of the government in terms of governance and the practice of parliamentary democracy, said Wong.

He voiced concern that it should be basic parliamentary democracy to give lawmakers some time to look at the documents and prepare before the parliamentary session starts on Tuesday.

Wong said he had sent out a letter to Najib on Sept 5, requesting for the amended copy to the bill to be revealed, only to receive a reply two weeks ago from the MoF that it had nothing to do with the request.

The IRB is targeting to collect some RM140 billion in taxes this year, he said, which is why “we are afraid that if the amendments (to the Bill) were passed, the finance minister will have unfettered power to increase the size of the IRB fund”.

Historically, the federal tax collection agency’s investment pool is capped at RM250 million, said Wong, noting that the type of investment it can make is limited to fixed deposits.

“The basic principle is that they should engage only in conservative investments as this is taxpayers’ money, for example, in fixed deposits or government securities.

“Buying land or private equities is high risk. They should never go to buying properties or stocks,” said Wong.

The bill, if passed, will allow the proposed investment panel to make investments using taxpayers’ money to acquire stocks, bonds, debts and property assets that are deemed fit by the finance minister.

The current law allows the IRB to invest monies collected on a short-term basis with Bank Negara Malaysia or licensed banks, or in government bonds, mortage papers or commercial notes before getting transferred to the Treasury for disbursement to the various ministries.

This article first appeared in The Edge Financial Daily, on October 3, 2014.