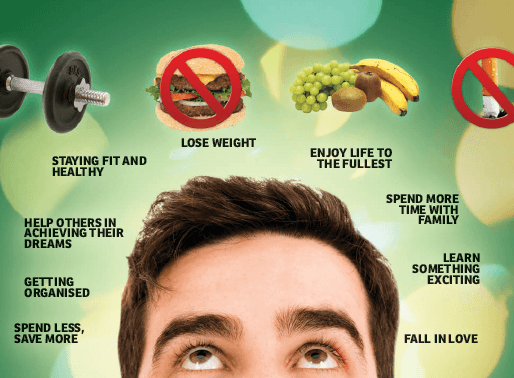 NEW YEAR’S resolutions are now decidedly out of fashion, something to be mocked at and taken lightly. The reason is simple: we just can’t seem to keep our resolutions, and now many have given up making them altogether.

According to a popular 2014 study by University of Scranton’s Journal of Clinical Psychology in the United States, only about 8% of Americans follow through with their resolutions made from the New Year.

So we joke about it or make ‘no resolutions’ resolutions to guarantee achievement, but deep down or subconsciously, if we’re honest with ourselves, there will be some sort of vague aspirations or expectations at the very least, even if we consider ourselves cynical or realistic, of wanting to improve ourselves in the new year.

The good news for resolutions makers and holders, according to research, is that people who explicitly make resolutions are up to 10 times more likely to attain their goals, compared to those who do not sit down to detail any.

The younger you are, the better your statistical position to achieve them too. University of Scranton’s research suggests that up to 39% of people in their 20s achieve their resolutions each year, whereas those aged over 50 were reported to only have a 14% rate of achieving success.

What kind of resolutions do people make? The four main common categories of New Year’s resolutions are related to self-improvement and education, weight, money and relationships.

If you’ve made some resolutions for 2015 — and have successfully kept them thus far — good on you! The average statistics for keeping resolutions slide downwards as the days go by, however, that daunting pressure of keeping a great big resolution can be mentally sidestepped by turning it into step-by-step targets and short-term goals.

Here are some points to ponder and work on:

Attainable
How many times have we made resolutions to ‘eat healthy’, ‘wake up early’, ‘exercise everyday’, ‘be more productive’ and ‘save money’, only to be overwhelmed long before the calendar flips to February? A friend who has a knack for setting and meeting annual goals once said “be picky!”

Take time to evaluate what resolutions you’re most likely able to keep with your current lifestyle and daily routine, or what is most necessary to bring change at the current juncture. Then focus on one thing at a time for a period, chances are you can cultivate habits that will last the year (and more) from then. Small goals attained will also boost your confidence and determination to tackle the bigger ones, for example having a sit-down breakfast each morning, making your own bed, spending 15 minutes reading, or having a 10-minute face-to-face talk with your children.

Get into specifics
According to the University of Scranton survey, one of the top 10 resolutions for 2014 was to ‘Enjoy life to the fullest’, with the number one resolution being to ‘lose weight’. In a Forbes article by contributor Dan Diamond, he quoted social psychologist Roy Baumeister, noting that goals have to be measured by achievable metrics to avoid tripping at the starting line.

“A resolution to lose some weight is not that easy to follow,” said Baumeister, a professor at Florida State University and co-author of the book Willpower, Rediscovering the Greatest Human Strength. In an interview with The Atlantic, the professor said that it’s a case of using our willpower more wisely to get the most out of it, citing developing effective habits as the best way to invest our willpower into, allowing it to become an automatic behaviour pattern.

The starting point is to be as specific as can be, he added. John Norcross, the clinical psychologist at University of Scranton agrees, stating that “if you can’t measure it, it’s not a very good resolution”.

Perhaps a good, easy start would be drinking the commonly recommended two litres of water a day, starting with 500ml first thing in the morning each day, while limiting caffeine to only one a day for six weeks. As for enjoying life to the fullest, find out what gives a sense of meaning to your life or that which makes you feel fulfilled, then schedule that into your planner in a doable way.

No secrets
One of the best and fun ways to keep yourself in check is to have a session with your family or close friends and share your targets and goals with them. You can then write it down on a slip of paper and place it either on a visible place or in your wallet/purse. If there may be a friend or partner who is willing and committed to helping you journey along in your resolution, loop them in and choose to be accountable to one another.

Expect setbacks
We give up all too soon. One of the main reasons why resolutions don’t work — after vague resolutions and overly ambitious ones — is that we are sold on the idea that it is something to start again only next year. Once we factor in that, there might be lapses and failures and from there measures of what to do to kick-start again. We can train ourselves to become accustomed to getting onto the starting block again and again. Perhaps it’s been a bad week and all our resolutions and discipline went all out the window. Let’s get back to that starting point of one thing at a time, a week at a time. The feeling of trying and failing is worth it at the end of the year knowing we put up a fight.

Re-evaluate and reset
Maybe it is because our goal is unrealistic and not as doable as we expected. Then it is time to re-evaluate. A good habit is to set a date each quarter (set it now at the beginning) to sit down and look at how we’ve done during that period. It would be helpful to adjusting if a journal or weekly check and note list has been made. For example,  you might have started your goal of losing weight by being more selective in your foods, but now find that you’re ready to cut portion sizes or cut out certain types of food for a couple of days during the week. Alternatively, working out four times a week may be a tad too time-consuming and it may be good to shorten your work-out time and days but increase the intensity. Even if you’ve completely broken your resolutions during the period, it allows a fresh opportunity to start again from scratch.

Identify your motivation
A resolution means a firm decision, a made-up mind to pursue or do something. That means, to be obvious, we must first be resolute about it. Many a times we make resolutions during the New Year without actually thinking specifically about why or how much we want to make that change.

Here’s to a purposeful and determined 2015!

This article first appeared in The Edge Financial Daily, on January 6, 2015.