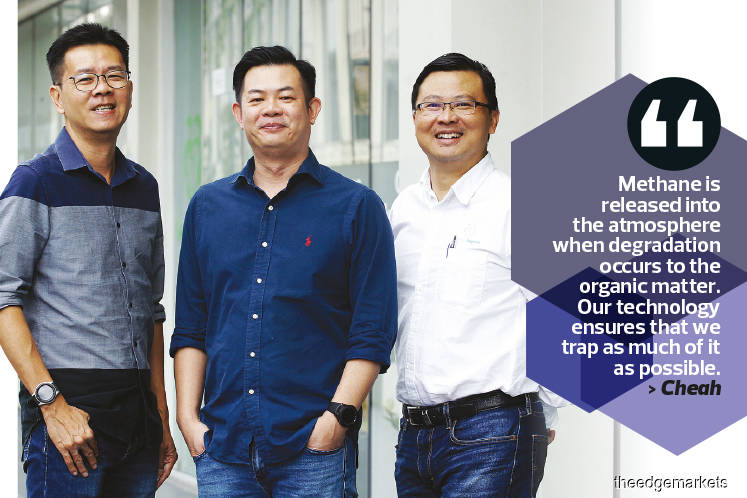 In 2016, Green Lagoon Technology Sdn Bhd (GLT) was the first renewable energy company to launch an equity crowdfunding (ECF) campaign in the country. ECF platforms were new back then, having just been introduced by the Securities Commission Malaysia the previous year.

Last year, GLT made the news when it became the third exit from an ECF campaign in Malaysia. It was arguably the most successful one as the investors who exited received a 100% return on investment. Investors in the first two exits saw returns of 44.2% and 10%.

In a way, this campaign helped the GLT founders achieve their goal of educating Malaysians on the potential of biogas as a source of renewable energy.

Biogas is produced naturally through the decomposition of organic waste. For instance, when food scraps or animal waste break down in the absence of oxygen (anaerobic digestion), a blend of gases — primarily methane and carbon dioxide — is released. Methane, which is a good fuel source, can be turned into energy.

GLT specialises in the trapping, treatment and utilisation of biogases, especially from palm oil mill effluent (POME), the wastewater generated by palm oil mills. Before 2012, the company destroyed the methane in biogas and earned revenue by claiming carbon credits from the emissions trading market. After that, GLT monetised the biogas by turning it into electricity and selling it to the grid via the Feed-in Tariff (FiT) mechanism.

The technology was not novel and the model was simple. But it was a relatively new industry in Malaysia. As a result, the company founders struggled to introduce their business to financial institutions.

“We struggled to get loans and financing for our projects because financial institutions did not understand the industry. For instance, they asked for a track record of the company. Well, there is none because we were new [and the FiT model was new],” says GLT co-founder and chief operating officer Raymond Cheah.

“Our company was also very small. The terms were tough to fulfil.”

The public also had scant understanding of the industry, he observes. “I spent a lot of time doing roadshows, speaking to university students and at conferences. I almost always encountered the same question: ‘What is biogas?’ There is little understanding of the industry in the market, so it is no wonder the banks do not want to provide financing.”

It was then that Cheah and his co-founders, CEO Chan Sow Keong and executive director Cheh Koon Chee, decided to use ECF to raise funds as well as the industry’s profile. “Our campaign was two-pronged. We raised money and it also gave us a platform to explain what biogas is. We were featured in a lot of magazines and websites,” he says.

In the end, they were successful. It also helped that many green campaigns, such as the one against plastic bags, were taking off. Being green, the company’s business fit in with the general trend.

POME, one of the major waste streams from the oil palm industry, is high in organic content. If it leaks into the waterways, it could deplete oxygen in the water and kill aquatic life. Many palm oil mills use open pond systems to treat the effluent, according to reports. However, these systems typically fail to capture the biogas that is produced through the natural degradation of POME.

“Naturally, methane is released into the atmosphere when degradation occurs to the organic matter. Our technology ensures that we trap as much of it as possible. We are close to trapping 100% of the gas now. Methane is a good fuel source, so we clean up the gas and put it in a generator to produce electricity,” says Cheah.

Biogas is rich in methane, which is 84 times more potent than carbon dioxide and a powerful contributor to global warming.

How it all began

Cheah, who has a background in civil engineering, met his co-founders when they were working for a foreign company dealing in carbon credits. Their employer captured biogas, destroyed the methane and sold it as carbon credits.

Under the Clean Development Mechanism (defined in the Kyoto Protocol), the developers of projects to cut carbon emissions receive a carbon credit issued by the United Nations for every tonne of carbon dioxide “avoided”, that is, prevented from entering the atmosphere.

After the company left Malaysia, the founders realised there was a gap in the market. “So, we started with two investors, who gave us seed money to start the company in 2010 because they believed in our ideas and vision,” says Cheah.

However, the Kyoto Protocol ended in 2012 and the carbon credit market collapsed. The founders looked around for a new business model and realised there was potential in POME. Many palm oil companies did not bother with the biogases released. At most, they would flare or burn the gases off, which not only polluted the atmosphere but also represented a huge waste of resources.

“You cannot blame them as they were too far from the grid or it was just not viable to connect to the grid,” says Cheah.

Many palm oil mills do not need a lot of electricity to operate, which is why they can exist in remote areas.

POME is a huge problem — and a potential energy source — for Malaysia, a major palm oil producer. According to a study published in the Journal of Oil Palm Research, up to 43.29 million cu m of the raw effluent is produced a year as a result of the milling process in the country (based on 2016 numbers).

The GLT founders became contractors or consultants for projects with palm oil mills. But in 2014, a revision of the FiT rates made the whole scheme more attractive to the millers. It also allowed the company to invest in biogas projects and share the returns with the millers, who do not need to put in any capital expenditure.

The original FiT mechanism (before 2019) allowed renewable energy generators to sell electricity to the grid at a fixed premium rate. It was so popular with solar power producers that the quota was rapidly filled annually. It has since been replaced in the solar power category by the net energy metering system, which does not pay a premium rate. Last year, the e-bidding system was introduced for biogas under the FiT scheme, also effectively removing the payment of premium rates.

The FiT scheme changes the game for GLT and palm oil millers. Prior to this, many of the miller had preliminary forms of biogas trapping, says Cheah. This means they may just trap the biogas and burn it off.

But with the FiT, the palm oil millers are incentivised to trap biogas and turn it into electricity for the grid as the scheme almost guarantees a profit for the generators.

In this model, the palm oil mills supply POME free of charge to GLT, which forks out money to build the structure and shares a royalty fee of between 10% and 13% of the electricity sales revenue with the mill, according to GLT’s ECF campaign information. This model ensures recurring income for the company and the mill for the duration of the FiT scheme, which is typically 21 years.

Most palm oil mills today still do not capture methane from biogas, which means there is still a huge potential market, Cheah observes. “But we all understand where the millers are at the moment. They are under a lot of pressure to conform to the rules of the Malaysian Palm Oil Board (MPOB) and European buyers, which refuse to buy our palm oil [due to environmental concerns.] The mills have a lot of difficulties already, so imposing additional capital expenditure on them may be one straw too many,” he says.

Under MPOB’s regulations, new mills and those that want to increase capacity are required to capture biogas. This has encouraged the millers to consider using GLT’s services. With the FiT scheme, they can use the biogas to generate additional income without incurring any capital expenditure.

But could the FiT disappear for biogas, the way it did for the solar industry? Cheah does not discount that possibility.

“Of course, there could be something else in the future. Maybe there will be a smart grid system or we can sell the electricity [from biogas] to an industry. We have to be creative. I think the solutions post-FiT will be somewhere along those lines,” he says.

Meanwhile, there are plenty of palm oil mills that do not have this technology. GLT hopes to offer these mills solutions to help them manage their biogas emissions, beyond just turning the emissions into electricity for the FiT scheme.

The company is always on the lookout for other sources of renewable energy such as the manure from chicken, swine or cattle farms. “But in Malaysia, our farms are generally not that big. That is why it is still not very viable to apply for the FiT scheme through these non-palm oil feedstock. The lowest hanging fruit is biogas right now,” he says.